This one-minute animation shows the shock wave that is created when the core of a massive star collapses.

This movie shows the time-evolution of the shock wave that is created when the core of a massive star collapses to a proto-neutron star. The shock does not immediately explode the star but “stalls” (because the outer parts of the star [not shown in the movie] are excerting ram pressure on it). The shock is “revived” within a tenth of a second or so, most likely, by heating by neutrinos emitted from the proto-neutron star. The different colors correspond to gas of different temperature (the variable shown is “specific entropy”, which is closely related to temperature). Blue corresponds to the coldest gas, green is hotter gas, and yellow and red are the hottest gas.

Supercomputer model predictions say that the deaths of stellar giants are lopsided affairs in which debris and the stars’ cores hurtle off in opposite directions.

New observations of a recently exploded star back this up.

While observing the remnant of supernova (SN) 1987A, NASA’s Nuclear Spectroscopic Telescope Array, or NuSTAR, recently detected the unique energy signature of titanium-44, a radioactive version of titanium that is produced during the early stages of a particular type of star explosion, called a Type II, or core-collapse supernova.

Fiona Harrison is a professor of physics at Caltech, is NuSTAR’s principal investigator. Harrison said:

Titanium-44 is unstable. When it decays and turns into calcium, it emits gamma rays at a specific energy, which NuSTAR can detect. 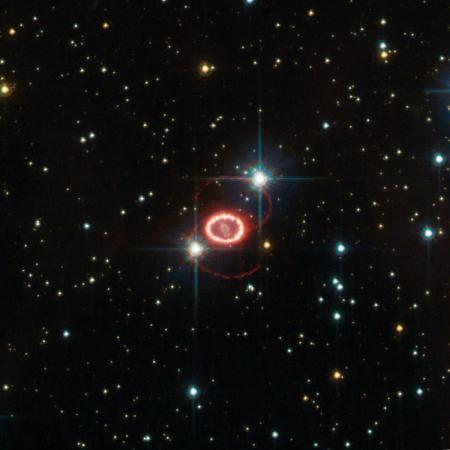 The still unraveling remains of supernova 1987A are shown here in this image taken by NASA’s Hubble Space Telescope. The bright ring consists of material ejected from the dying star before it detonated. The ring is being lit up by the explosion’s shock wave. Image credit: ESA/Hubble & NASA

By analyzing direction-dependent frequency changes—or Doppler shifts—of energy from titanium-44, Harrison and her team discovered that most of the material is moving away from NuSTAR. The finding, which appears in Science, is the best proof yet that the mechanism that triggers Type II supernovae is inherently lopsided.

NuSTAR recently created detailed titanium-44 maps of another supernova remnant, called Cassiopeia A, and there too it found signs of an asymmetrical explosion, although the evidence in this case is not as definitive as with 1987A.

Supernova 1987A was first detected in 1987, when light from the explosion of a blue supergiant star located 168,000 light-years away reached Earth. SN 1987A was an important event for astronomers. Not only was it the closest supernova to be detected in hundreds of years, but also it marked the first time that neutrinos had been detected from an astronomical source other than our sun.

These nearly massless subatomic particles had been predicted to be produced in large quantities during Type II explosions, so their detection during 1987A supported some of the fundamental theories about the inner workings of supernovae.

With the latest NuSTAR observations, 1987A is once again proving to be a useful natural laboratory for studying the mysteries of stellar death. For many years, supercomputer simulations predicted that the cores of pending Type II supernovae change shape just before exploding, transforming from a perfectly symmetric sphere into a wobbly mass made up of turbulent plumes of extremely hot gas. In fact, models that assumed a perfectly spherical core just fizzled out. Harrison said:

If you make everything just spherical, the core doesn’t explode. It turns out you need asymmetries to make the star explode.

According to the simulations, the shape change is driven by turbulence generated by neutrinos that are absorbed within the core.

Researchers say that a better understanding of the asymmetrical nature of Type II supernovae could help solve one of the biggest mysteries surrounding stellar deaths: why some supernovae collapse into neutron stars and others into a black hole to form a space-time singularity. It could be that the high degree of asymmetry in some supernovae produces a dual effect: the star explodes in one direction, while the remainder of the star continues to collapse in all other directions.

Bottom line: Supercomputer model predictions say that the deaths of stellar giants are lopsided – debris and the stars’ cores hurtle off in opposite directions. This one-minute movie shows the shock wave that is created when the core of a massive star collapses to a proto-neutron star.