How to watch online as the saucer-shaped Low Density Supersonic Decelerator, or LDSD, test is broadcast beginning at 7 a.m. HST, 1 p.m. EDT, 1700 UTC. 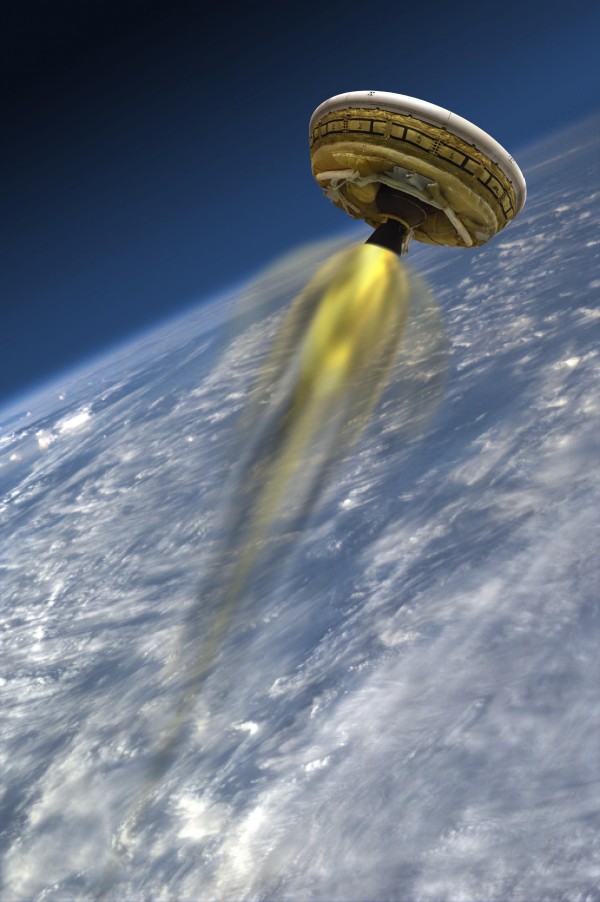 NASA plans to test its rocket-powered flying saucer – designed to demonstrate technologies that will come into play for delivering heavy payloads to Mars – today (June 4, 2015) from a test range in Hawaii. NASA Television and JPL’s Ustream channel both will carry live coverage of launch activities beginning at 7 a.m. HST, 1 p.m. EDT, 1700 UTC. Launch commentary begin 30 minutes prior to launch, which will occur no earlier than 7:30 a.m. HST.

The saucer-shaped Low Density Supersonic Decelerator, or LDSD, will be carried aloft by a high altitude balloon from the Navy’s Pacific Missile Range Facility on Kauai, Hawaii.

NASA said in a June 3 statement of today’s test:

The balloon may take two to three hours to reach its float altitude of 120,000 feet. After the balloon reaches test altitude, the saucer-shaped LDSD test vehicle will be dropped and its powered flight will begin.

A fraction of a second after dropping from the balloon, and a few feet below it, four small rocket motors will fire up to spin stabilize the saucer.

Just over two seconds later, a Star 48B long-nozzle, solid-fueled rocket engine will kick in with 17,500 pounds of thrust, sending the test vehicle to the edge of the stratosphere, or about 180,000 feet, at a speed of Mach 4. Shortly after reaching solid rocket motor burn out, four additional small rocket motors will fire up to de-spin the saucer.

The LDSD crosscutting technology demonstration mission will test two breakthrough technologies that will enable larger payloads to be landed safely on the surface of Mars or other planetary bodies with atmospheres, including Earth. 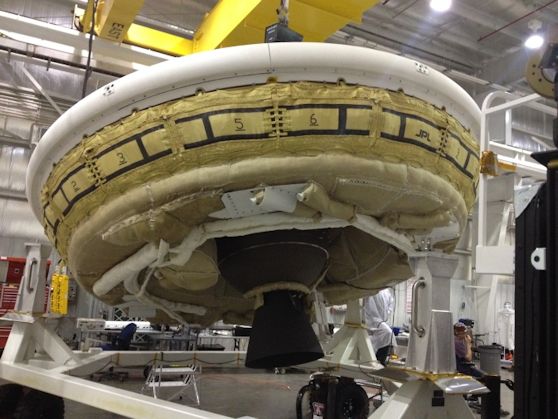 A saucer-shaped test vehicle holding equipment for landing large payloads on Mars is shown in the Missile Assembly Building at the US Navy’s Pacific Missile Range Facility in Kaua‘i, Hawaii. Image credit: NASA/JPL-Caltech

Bottom line: The saucer-shaped Low Density Supersonic Decelerator, or LDSD – – designed to demonstrate technologies that will come into play for delivering heavy payloads to Mars – will undergo a test today (June 4, 2015) from a test range in Hawaii. Watch online via NASA Television or JPL’s Ustream channel beginning at 7 a.m. HST, 1 p.m. EDT, 1700 UTC.