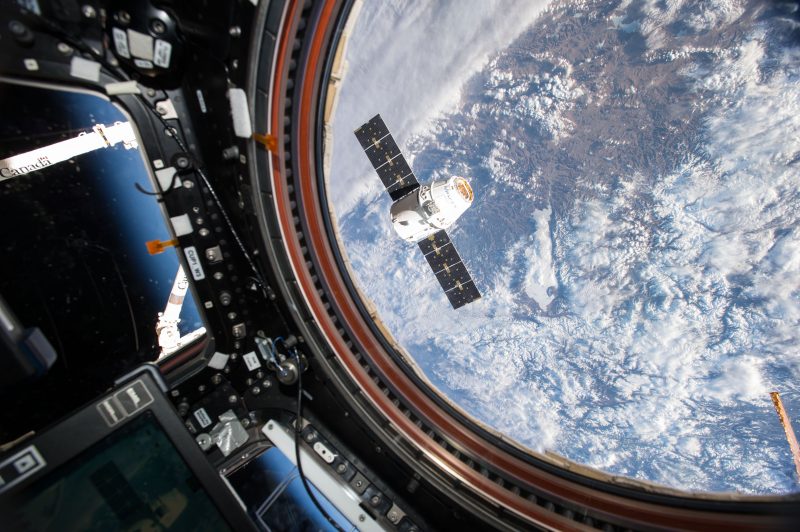 NASA astronaut Tim Kopra captured an image of the SpaceX Dragon spacecraft, on the company’s eighth Commercial Resupply Services mission, from the Cupola Module of the International Space Station during Expedition 47 in April 2016. Image via NASA

SpaceX’s Commercial Resupply Service-9 mission arrived at the ISS on July 20, 2016 and delivered almost 5,000 pounds of supplies, experiments and equipment – including a docking adapter for future American commercial crew spacecraft.

The Dragon spacecraft will be detached from the Earth-facing port of the Harmony module using the station’s Canadarm 2 robotic arm. Robotics controllers will send commands to maneuver the spacecraft into place before it’s released by Expedition 48 Flight Engineers Kate Rubins of NASA and Takuya Onishi of the Japan Aerospace Exploration Agency (JAXA) at 6:10 a.m.

The spacecraft will move to a safe distance from the station and fire its engines at 10:56 a.m. to drop out of orbit and descend back to Earth. A parachute-assisted splashdown in the Pacific is expected at 11:47 a.m. about 326 miles west of Baja California. A recovery team will retrieve the capsule and about 3,000 pounds of cargo and experiments for researchers and investigators.

The deorbit burn and splashdown will not air on NASA TV. In the event of adverse weather conditions in the Pacific, the backup departure and splashdown date is Sunday, August 28, 2016.