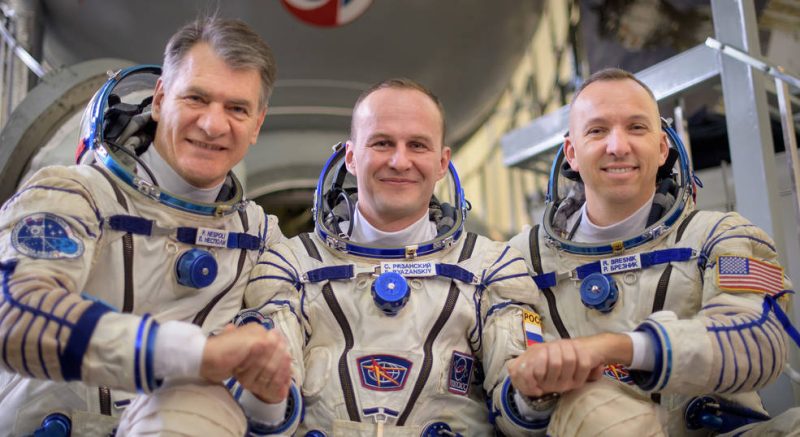 Expedition 52 flight engineers Paolo Nespoli of ESA, left, Sergey Ryazanskiy of Roscosmos, and Randy Bresnik of NASA pose for a photograph outside the Soyuz simulator. Image via NASA/ Bill Ingalls.

Three new crew members for the International Space Station (ISS) are scheduled to launch on Friday, July 28, 2017 from the Baikonur Cosmodrome in Kazakhstan. Live launch coverage will begin at 10:45 a.m. EDT (14:45 UTC) on NASA TV. The launch is scheduled for 11:41 a.m.(15:41 UTC) Translate to your timezone.

After launching, the trio – NASA astronaut Randy Bresnik, Sergey Ryazanskiy of Roscosmos and Paolo Nespoli of ESA (European Space Agency) – will travel for six hours in the Soyuz MS-05 spacecraft before docking to the space station’s Rassvet module. NASA TV coverage of the docking will begin at 5:15 p.m. EDT (21:15 UTC). The arriving crew will be welcomed onboard by Expedition 52 Commander Fyodor Yurchikhin of Roscosmos and Flight Engineers Peggy Whitson and Jack Fischer of NASA. Coverage of hatch opening and welcoming ceremonies will begin at 7 p.m. (23:00 UTC) Translate to your timezone.