On Tuesday, July 21, 2020, 2 NASA astronauts will perform the 2nd in a pair of International Space Station (ISS) spacewalks, to finish a 3.5-year effort to upgrade the station’s power system. How to watch. 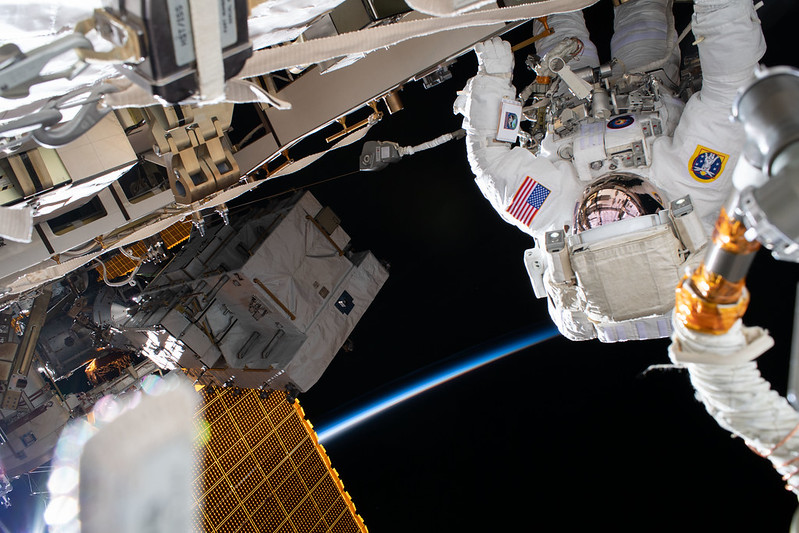 Astronaut Chris Cassidy works during a spacewalk on July 16 to install lithium-ion batteries on the station. The orbiting lab was flying into an orbital sunrise at the time this photograph was taken. Image via NASA.

On Tuesday, July 21, 2020, two NASA astronauts will perform the second in a pair of International Space Station (ISS) spacewalks, to finish a 3 1/2-year effort to upgrade the station’s power system. At completion, 24 new lithium-ion batteries and adapter plates will replace 48 aging nickel-hydrogen batteries. NASA TV’s live coverage of the spacewalk will begin on Tuesday at 10:00 UTC (6:00 a.m. EDT). The spacewalk itself will begin at around 11:35 UTC (7:35 a.m. EDT), and will last as long as 7 hours. Translate UTC to your time. The first of the spacewalks happened on Thursday, July 16. Watch here.

On Tuesday’s spacewalk NASA astronauts Chris Cassidy and Robert Behnken will remove two lifting fixtures used for ground processing of the station’s solar arrays prior to their launch. They’ll also begin preparing the Tranquility module for the installation of a commercial airlock scheduled to arrive on a SpaceX cargo flight later this year. The airlock will be used to deploy commercial and government-sponsored experiments into space.

Much gratitude to those #heroes around the world who are battling on the frontlines of the pandemic. Your selflessness will be forever appreciated. #thankyou pic.twitter.com/TlgmyrmhQ7

On the July 16 spacewalk, the astronauts removed six aging nickel-hydrogen batteries for the second of two power channels for the starboard 6 (S6) truss, installed three new lithium-ion batteries, and installed the three associated adapter plates that are used to complete the power circuit to the new batteries. Mission Control reports that all three new batteries are working.

In all, 12 spacewalks will have been performed since January 2017 to change out batteries for eight power channels used to route electricity on the station. 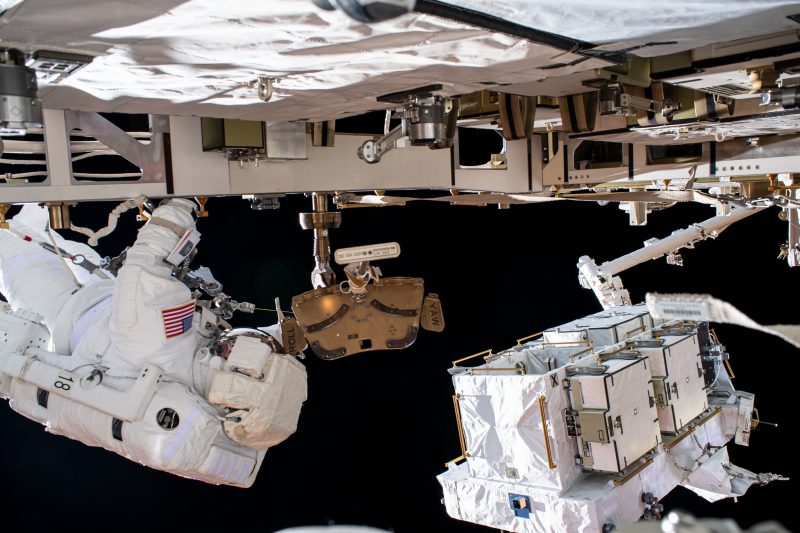 NASA astronaut Bob Behnken (at left) is pictured during a spacewalk to swap batteries and upgrade power systems on the International Space Station’s Starboard-6 truss structure. Pictured at lower right is an external pallet, gripped by the Canadarm2 robotic arm, that housed the batteries replaced on the orbiting lab. Behnken was joined during the 6-hour, 7-minute excursion by NASA astronaut Chris Cassidy (out of frame). Image via NASA.