Three International Space Station crew members will leave the spacecraft and return to Earth on Friday, September 11. Watch their departure and landing. 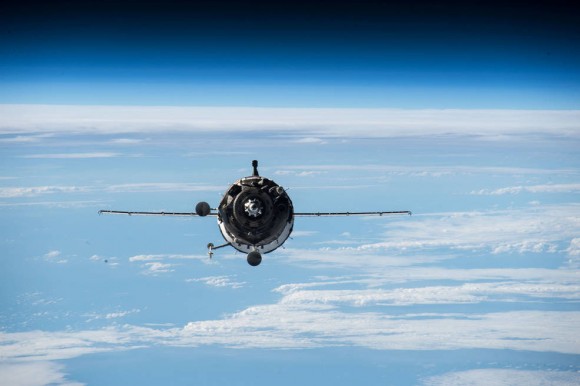 Three International Space Station crew members are set to return aboard the Soyuz TMA-16M spacecraft, which has been docked to the station since March. Image credit: NASA

On Friday (September 11, 2015) three crew members aboard the International Space Station (ISS) are scheduled to leave the orbiting laboratory and return to Earth. NASA Television will provide complete coverage of their departure and landing. Watch here.

Activities and NASA TV coverage times, (all EDT), are as follows:

The three crew members’ return will wrap up 168 days in space for Padalka since launching from Kazakhstan in March. Mogensen and Aimbetov spent 10 days in space, arriving at the station September 4 with Sergey Volkov of Roscosmos. The trio delivered a new Soyuz spacecraft that will return NASA astronaut Scott Kelly and Mikhail Kornienko of Roscosmos at the end of their one-year mission next March, along with Volkov.

With landing, Padalka will have logged a record 879 days in space on five flights, more than two months longer than cosmonaut Sergei Krikalev, the previous record holder.

At the time of undocking, Expedition 45 will formally begin aboard the station under Kelly’s command, along with crew mates Kornienko, NASA’s Kjell Lindgren, Russian cosmonauts Volkov and Oleg Kononenko and Kimiya Yui of the Japan Aerospace Exploration Agency. Expedition 45 will continue research and operational support of the station as it passes through the 15th anniversary of a permanent human presence on the laboratory that will be marked on November 2, 2015.

Bottom line: On Friday (September 11, 2015) NASA Television will provide complete coverage of the departure and landing of three International Space Station crew members as they leave the orbiting laboratory and return to Earth.