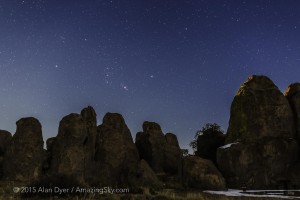 Orion rising with Comet Lovejoy (C/2014 Q2) at upper right as the fuzzy green spot, in a moonlit sky over the formations of the City of Rocks State Park, New Mexico, January 5, 2015. The Moon, a day past full, had risen and was behind the rocks lighting the sky and tops of the formations. Scattered light illuminated the scene. This is a single 13 second exposure at f/2.5 and ISO 2000 with the 35mm lens and Canon 6D, untracked.

Thank you! Your submission has been received!
Oops! Something went wrong while submitting the form.
END_OF_DOCUMENT_TOKEN_TO_BE_REPLACED