Watch clouds move over a methane sea on Titan

NASA has released an animation of methane clouds moving above a hydrocarbon sea on Saturn’s large moon, Titan.

Between July 20 and 22, 2014, the Cassini spacecraft – which has been orbiting Saturn since 2004 – tracked a system of clouds developing, then dissipating over a methane sea on Saturn’s large moon, Titan. Earthly scientists call this alien northern sea on Titan by the name Ligeia Mare. The scientists tracked the clouds, which are also made of methane, during this two-day period and made measurements of cloud motions revealing wind speeds of about 7 to 10 miles per hour (3 to 4.5 meters per second).

This renewed weather activity, considered overdue by researchers, could finally signal the onset of summer storms that atmospheric models have long predicted.

For several years after Cassini’s 2004 arrival in the Saturn system, scientists frequently observed cloud activity near Titan’s south pole, which was experiencing late summer at the time. Clouds continued to be observed as spring came to Titan’s northern hemisphere. But since a huge storm swept across the icy moon’s low latitudes in late 2010, only a few small clouds have been observed anywhere on the icy moon. The lack of cloud activity has surprised researchers, as computer simulations of Titan’s atmospheric circulation predicted that clouds would increase in the north as summer approached, bringing increasingly warm temperatures to the atmosphere there.

We’re eager to find out if the clouds’ appearance signals the beginning of summer weather patterns, or if it is an isolated occurrence. Also, how are the clouds related to the seas? Did Cassini just happen catch them over the seas, or do they form there preferentially?

NASA says that observing seasonal changes on Titan will continue to be a major goal for the Cassini mission as summer comes to Titan’s north and the southern latitudes fall into winter darkness. 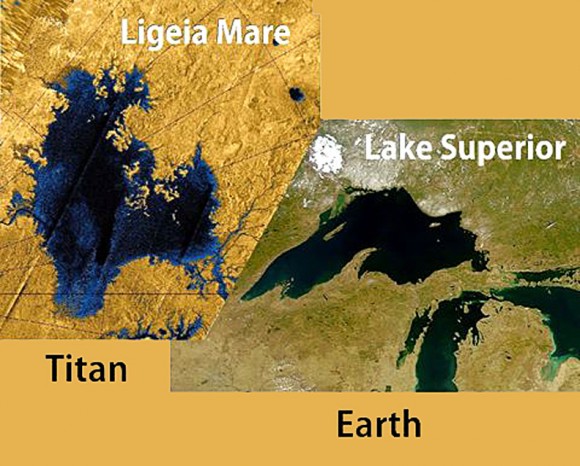 A comparison of the size of Lake Superior in the U.S. to Ligeia Mare on Titan, via AstroBob

Bottom line: NASA has released an animation of methane clouds moving above a hydrocarbon sea on Saturn’s large moon, Titan. The Cassini spacecraft acquired the images for the animation on July 20 and 22, 2014.