Watch an exoplanet orbit its star

A series of images has been made into a video, showing Beta Pictoris b moving through 18 months of its 22-year orbit around its star. Very cool!

University of Toronto released this video earlier this month. It’s made from a series of images captured between November 2013 and April 2015, and it shows an exoplanet, a planet orbiting a distant star, moving through 18 months of its 22-year orbit around its star. The star is called called Beta Pictoris, and it’s visible, faintly, in the night sky seen from Earth’s Southern Hemisphere. The exoplanet, called Beta Pictoris b, was already famous among the 1,957 exoplanets discovered as of September 21, 2015.

It’s famous because, although most exoplanets were detected via the transit method (astronomers detected a faint drop in a star’s brightness as an exoplanet passed between us and its star), Beta Pic b is one of the few planets beyond our solar system that has been directly detected.

In other words, unlike most of the other known exoplanets, we can see Beta Pictoris b with our own eyes.

First discovered in 2008, Beta Pic b is a gas giant planet 10 to 12 times the mass of Jupiter. It has an orbit around its star roughly the same diameter as planet Saturn in our solar system.

The star Beta Pictoris is 63 light-years from Earth and is central to a complex and dynamic system, which includes the one known planet (Beta Pictoris b), comets, orbiting gas clouds, and an enormous debris disk that in our solar system would extend from Neptune’s orbit (30 A.U., or 30 times the sun/Earth distance) to nearly 2,000 A.U. 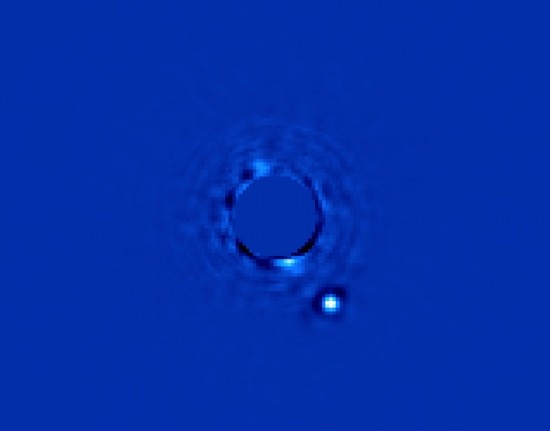 An earlier direct image of the planet Beta Pictoris b, via the Gemini Planet Imager instrument. This image is from 2014. Image via Christian Marois, NRC Canada.

Maxwell Millar-Blanchaer is a PhD-candidate in the Department of Astronomy and Astrophysics at University of Toronto, and he’s lead author of a paper on the new observations of Beta Pictoris b published September 16 in the Astrophysical Journal. The paper describes the 18 months of observations that went into making the video above.

Those observations were made with the Gemini Planet Imager (GPI) instrument on the Gemini South telescope in Chile. GPI uses an adaptive optics system with a spectrograph operating at infrared wavelengths to retrieve direct images of planets orbiting distant stars. It’s an impressive feat because these distant worlds are typically about a million times fainter than their stars. Millar-Blanchaer said:

The images in the series represent the most accurate measurements of [Beta Pictoris b’s] position ever made. 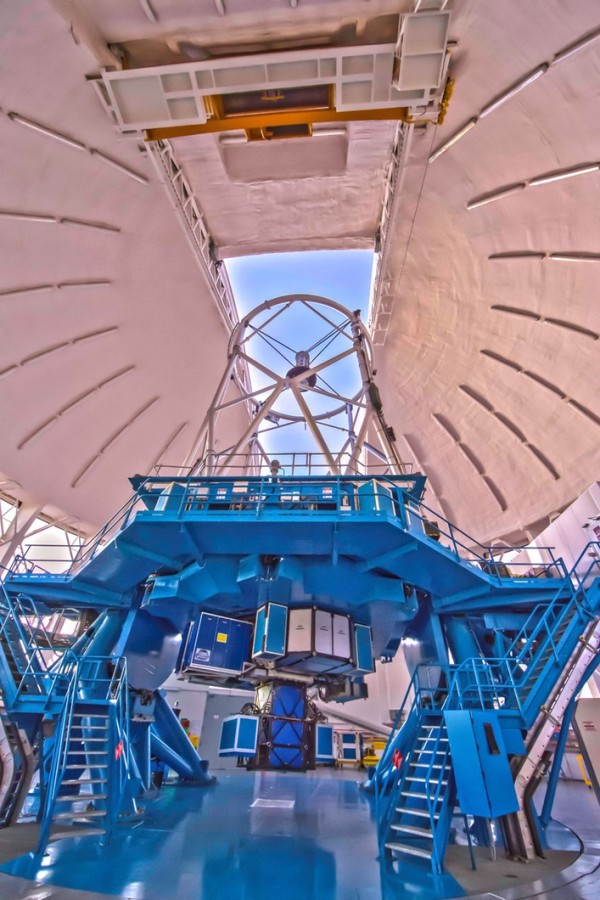 The Gemini Planet Imager instrument on the Gemini South telescope in Chile.

By the way, as you can read in this announcement from the Gemini South telescope in Chile, a series of earthquakes and aftershocks along the coast of Chile began on September 16, 2015 with an extremely powerful 8.3-magnitude earthquake. The epicenter of the quake was about 90 miles (150 km) from the Gemini South telescope, and the telescope did sustain damage. The September 17 announcement said:

Fortunately the staff at the summit and in [nearby] La Serena are all fine. A first check of the telescope and installations where done after the quake and nothing obvious was seen, but it was decided to cancel the night. After a thorough inspection of the telescope … it was found that the telescope had shifted on the azimuth platform. The telescope will remain closed over the weekend and next week. Over the next week, further diagnosis of the event will take place and we will then be able to better assess the extent of the damage and the steps needed to restore the telescope into working order.

I haven’t heard any direct word on the Gemini Planet Imager instrument, but presumably it is fine.

Bottom line: A series of images has been made into a video, showing Beta Pictoris b moving through 18 months of its 22-year orbit around its star.

Via University of Toronto and Gemini South telescope