For the first time, heavy metal gases like magnesium and iron have been detected floating away from an exoplanet, a planet orbiting a distant sun. Why? Because the planet – which is about as big as Jupiter – is orbiting perilously close to its star. 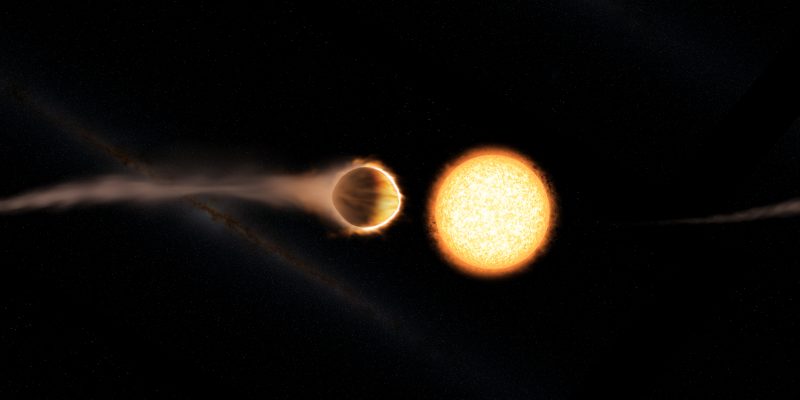 Artist’s concept of WASP-121b, which orbits so close to its star and is so hot that heavy metal gases in its atmosphere are escaping into space. Image via Engine House VFX/At-Bristol Science Centre/University of Exeter/JPL.

Exoplanets – worlds orbiting other stars – have been discovered in a wide variety of types and sizes, from small rocky worlds to sizzling hot gas giants orbiting close to their stars. The phrase “music of the spheres” comes to mind, an ancient philosophical concept that regarded the movements of the sun, moon and planets as a form of music. While that phrase tends to evoke thoughts of classical melodies, one exoplanet in particular seems to fit the heavy metal genre better.

The planet – WASP-121b, a hot Jupiter 900 light-years from Earth – orbits so close to its star that its upper atmosphere is a sizzling 4,600 degrees Fahrenheit (2,500 Celsius). The gravity of its host star has distorted the planet into the oblong shape of an American football. First discovered in 2015, the planet is 1.8 times the mass of Jupiter.

The Hubble Space Telescope (HST) detected gas escaping from the planet, iron and magnesium gas, dubbed “heavy metals.” These new peer-reviewed results were published on August 1 in The Astronomical Journal.

Evidence suggests that the lower atmosphere of WASP-121b is so hot that iron and magnesium remain in a gaseous state. They stream to the upper atmosphere, where they can escape into space on the coattails of hydrogen and helium gas. This is the first time that such gases have been observed escaping a hot Jupiter exoplanet. As David Sing, a researcher at Johns Hopkins University in Baltimore, Maryland, said:

Heavy metals have been seen in other hot Jupiters before, but only in the lower atmosphere. So you don’t know if they are escaping or not. With WASP-121b, we see magnesium and iron gas so far away from the planet that they’re not gravitationally bound. The heavy metals are escaping partly because the planet is so big and puffy that its gravity is relatively weak. This is a planet being actively stripped of its atmosphere.

How does this process occur? First, the star itself is hotter than the sun, and ultraviolet light from the star heats the planet’s upper atmosphere. The escaping iron and magnesium gas may also help to heat the atmosphere even more, according to Sing:

These metals will make the atmosphere more opaque in the ultraviolet, which could be contributing to the heating of the upper atmosphere.

Not only is the planet’s atmosphere severely affected, but so is the planet as well. It is actually approaching the point where it could be ripped apart by the star’s gravity. Right now though, it has been stretched into a football-like shape. WASP-121b offers a rare observation opportunity for scientists, as Sing noted:

We picked this planet because it is so extreme. We thought we had a chance of seeing heavier elements escaping. It’s so hot and so favorable to observe, it’s the best shot at finding the presence of heavy metals. We were mainly looking for magnesium, but there have been hints of iron in the atmospheres of other exoplanets. It was a surprise, though, to see it so clearly in the data and at such great altitudes so far away from the planet.

According to Drake Deming, an astronomer at the University of Maryland:

This planet is a prototype for ultra-hot Jupiters. These planets are so heavily irradiated by their host stars, they’re almost like stars themselves. The planet is being evaporated by its host star to the point that we can see metal atoms escaping the upper atmosphere where they can interact with the planet’s magnetic field. This presents an opportunity to observe and understand some very interesting physics.

Hot Jupiters this close to their host star are very rare. Ones that are this hot are even rarer still. Although they’re rare, they really stand out once you’ve found them. We look forward to learning even more about this strange planet.

These observations of WASP-121b are part of the Panchromatic Comparative Exoplanetary Treasury Program (PanCET) survey. It is the first large-scale ultraviolet, visible, and infrared comparative study of 20 different exoplanets, ranging in size from super-Earths (several times Earth’s mass) to Jupiters (over 100 times Earth’s mass). 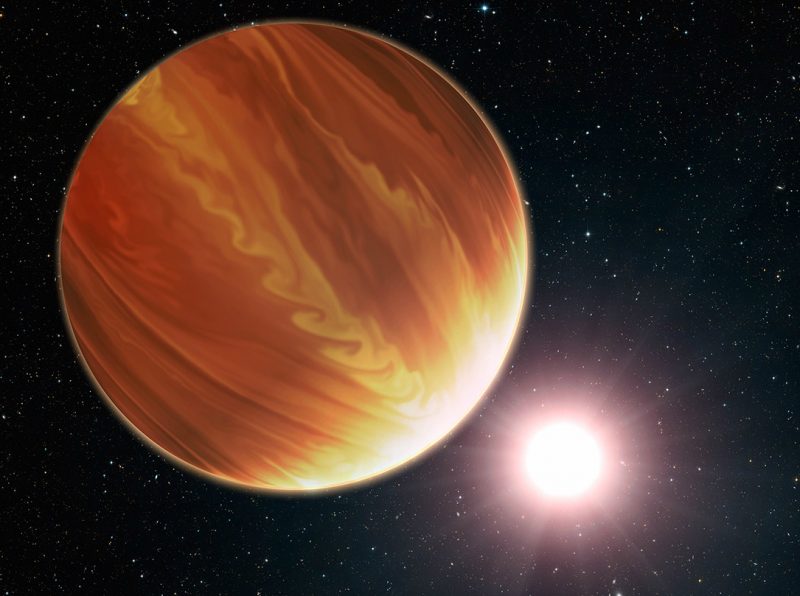 By studying WASP-121b and other hot Jupiters, scientists can learn more about how planets lose their primordial atmospheres. The atmospheres of still-forming planets tend to consist of the lighter-weight gases hydrogen and helium. But those atmospheres can be stripped away as a planet moves closer to its star. As Sing explained:

The hot Jupiters are mostly made of hydrogen, and Hubble is very sensitive to hydrogen, so we know these planets can lose the gas relatively easily. But in the case of WASP-121b, the hydrogen and helium gas is outflowing, almost like a river, and is dragging these metals with them. It’s a very efficient mechanism for mass loss.

WASP-121b is also an ideal target for future observations from the upcoming James Webb Space Telescope, which will be able to examine the atmosphere for water and carbon dioxide, and help provide a more complete analysis of all the chemical elements in the atmosphere. That data will help scientists better understand how worlds like hot Jupiters form, as well as planetary systems in general. 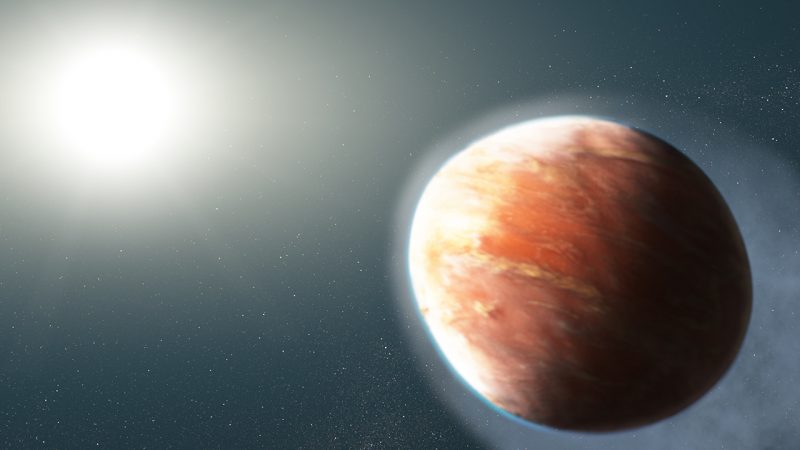 Artist’s concept of WASP-121b, which astronomers are describing as a heavy metal exoplanet. The planet is so hot that gases of magnesium and iron – called “heavy metals” because these elements’ atomic weights are greater than those of hydrogen or helium – are escaping its atmosphere. Meanwhile, the host star’s gravity is pulling on the planet and its atmosphere, stretching it into a football shape. Image via NASA/ESA/J. Olmsted (STScI)/Hubblesite.

Bottom line: WASP-121b is a kind of hot Jupiter exoplanet rarely seen, a world so hot and so close to its star that heavy metal gases are being stripped from its atmosphere and the planet itself is being stretched into the shape of a football.