New Horizons spacecraft will sweep past Pluto and its moons on July 15, revealing their surface features for the first time! You’re invited to help choose names.

On July 14, 2015, NASA’s New Horizons spacecraft will fly past Pluto, snapping the first-ever high resolution pictures of that small, distant world and its largest moon, Charon. As the surface features of these two worlds are revealed – craters, rifts, valleys – they’ll need names.

You can help decide what labels will go on the images and maps coming from the flyby. In cooperation with the International Astronomical Union, the SETI Institute has launched its “Our Pluto” campaign, which is soliciting input from the public on how to name features on the surfaces of Pluto and Charon. Vote/suggest names here 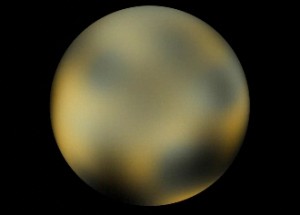 Based on Hubble Space Telescope images, this frame is a portion of a map of the surface of Pluto
Credit: NASA, ESA, and M. Buie (Southwest Research Institute)

Right now, even the best Hubble Space Telescope images of Pluto and Charon can’t discern surface details. Geological characteristics will emerge as New Horizons flies by the distant worlds in July. But the science team won’t have time to come up with names during the quick flyby, so they plan to assemble a library of names in advance.

You can vote for your favorites from a list of names, or suggest names not on the list. The names must be associated with a set of broad themes related to mythology and the literature and history of exploration. The website also includes a simple ballot to allow young children to participate.

The campaign runs until April 7, after which date the New Horizons team will sort through the names and submit their recommendations to the International Astronomical Union (IAU). The IAU will decide how the names are used.

Pluto belongs to everyone. So we want everyone to be involved in making the map of this distant world.

Currently, the best images of Pluto from the Hubble Space Telescope provide just a hint of what might be in store for the New Horizons cameras. It shows a world marked by sharp contrasts, with some areas as dark as asphalt and others as bright as snow.

Bottom line: In cooperation with the International Astronomical Union, the SETI Institute has launched its “Our Pluto” campaign, which is soliciting input from the public on how to name features on the surfaces of Pluto and Charon. The New Horizons spacecraft’s flyby of these distant worlds is July 15, 2015.