Whoa. It’s been 30 years since our 1st and last visit to Neptune 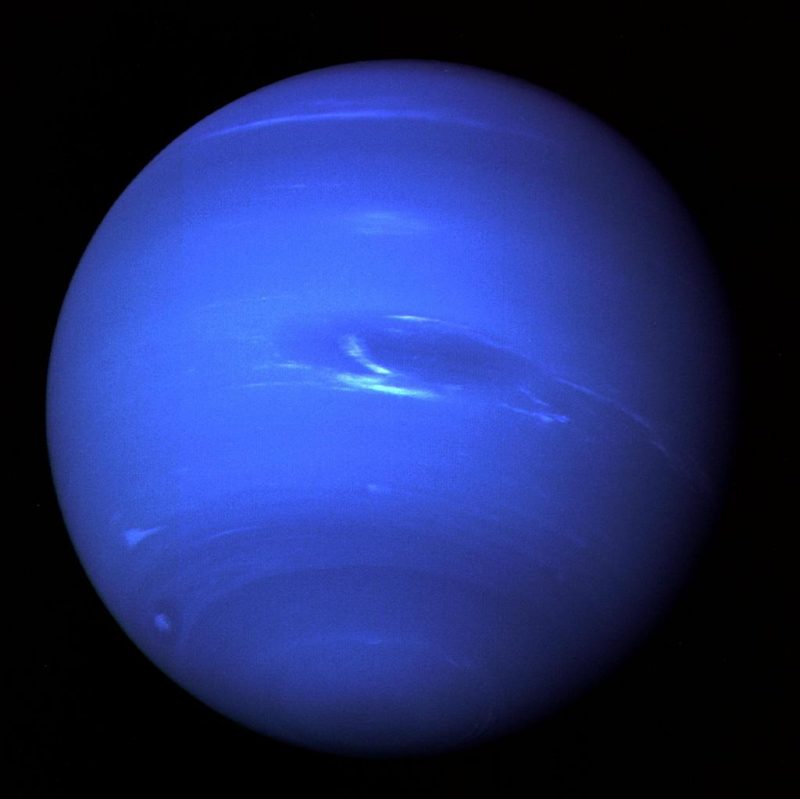 Voyager 2 acquired this image fewer than 5 days before its closest approach to Neptune on August 25, 1989. You can see Neptune’s Great Dark Spot – a storm in its atmosphere – and the bright, light-blue smudge of clouds that accompanies the storm. Read more about this image via NASA/JPL-Caltech.

Thirty years ago, on August 25, 1989, NASA’s Voyager 2 spacecraft made a close flyby of Neptune, giving humanity its first close-up of our solar system’s eighth planet. Marking the end of the Voyager mission’s Grand Tour of the solar system’s four giant planets – Jupiter, Saturn, Uranus and Neptune – that first was also a last: No other spacecraft has visited Neptune since. Ed Stone, a professor of physics at Caltech and Voyager’s project scientist since 1975, said:

The Voyager planetary program really was an opportunity to show the public what science is all about. Every day we learned something new.

Wrapped in teal- and cobalt-colored bands of clouds, the planet that Voyager 2 revealed looked like a blue-hued sibling to Jupiter and Saturn, the blue indicating the presence of methane. A massive, slate-colored storm was dubbed the Great Dark Spot, similar to Jupiter’s Great Red Spot. Six new moons and four rings were discovered. 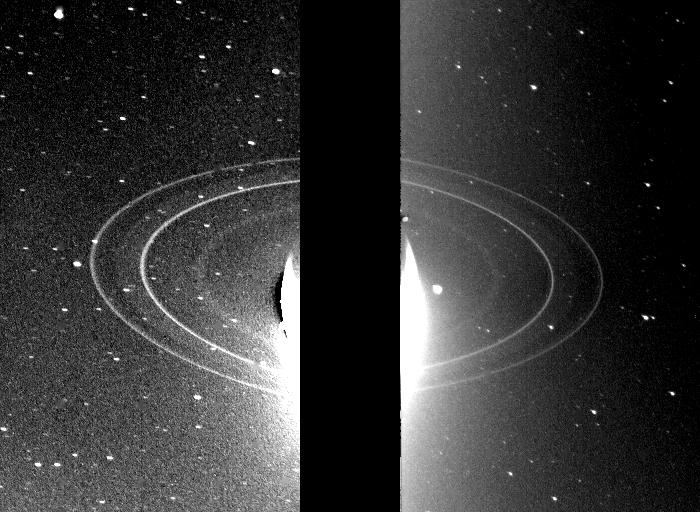 Voyager 2 took these 2 images of the rings of Neptune on August 26, 1989, just after closest approach. Neptune’s 2 main rings are clearly visible; 2 fainter rings are visible with the help of long exposure times and backlighting from the sun. Read more about this image via NASA PhotoJournal.

During the encounter, the engineering team carefully changed the probe’s direction and speed so that it could do a close flyby of the planet’s largest moon, Triton. The flyby showed evidence of geologically young surfaces and active geysers spewing material skyward. This indicated that Triton was not simply a solid ball of ice, even though it had the lowest surface temperature of any natural body observed by Voyager: minus 391 degrees Fahrenheit (minus 235 degrees Celsius).

About 30 times farther from the sun than Earth is, the icy giant receives only about 0.001 times the amount of sunlight that Earth does. In such low light, Voyager 2’s camera required longer exposures to get quality images. But because the spacecraft would reach a maximum speed of about 60,000 mph (90,000 kph) relative to Earth, a long exposure time would make the image blurry. (Imagine trying to take a picture of a roadside sign from the window of a speeding car.)

So the team programmed Voyager 2’s thrusters to fire gently during the close approach, rotating the spacecraft to keep the camera focused on its target without interrupting the spacecraft’s overall speed and direction.

The probe’s great distance also meant that by the time radio signals from Voyager 2 reached Earth, they were weaker than those of other flybys. But the spacecraft had the advantage of time: The Voyagers communicate with Earth via the Deep Space Network, or DSN, which utilizes radio antennas at sites in Madrid, Spain; Canberra, Australia; and Goldstone, California. During Voyager 2’s Uranus encounter in 1986, the three largest DSN antennas were 64 meters (210 feet) wide. To assist with the Neptune encounter, the DSN expanded the dishes to 70 meters (230 feet). They also included nearby non-DSN antennas to collect data, including another 64-meter (210 feet) dish in Parkes, Australia, and multiple 25-meter (82 feet) antennas at the Very Large Array in New Mexico.

The effort ensured that engineers could hear Voyager loud and clear. It also increased how much data could be sent back to Earth in a given period, enabling the spacecraft to send back more pictures from the flyby.

In the week leading up to that August 1989 close encounter, the atmosphere was electric at NASA’s Jet Propulsion Laboratory in Pasadena, California, which manages the Voyager mission. As images taken by Voyager 2 during its Neptune approach made the four-hour journey to Earth, Voyager team members would crowd around computer monitors around the Lab to see. Stone said:

One of the things that made the Voyager planetary encounters different from missions today is that there was no internet that would have allowed the whole team and the whole world to see the pictures at the same time. The images were available in real time at a limited number of locations.

But the team was committed to giving the public updates as quickly as possible, so from August 21 to August 29, they would share their discoveries with the world during daily press conferences. On August 24, a program called Voyager All Night broadcast regular updates from the probe’s closest encounter with the planet, which took place at 4 a.m. GMT (9 p.m. in California on August 24).

The next morning, Vice President Dan Quayle visited the Lab to commend the Voyager team. That night, Chuck Berry, whose song Johnny B. Goode was included on the Golden Record that flew with both Voyagers, played at JPL’s celebration of the feat. 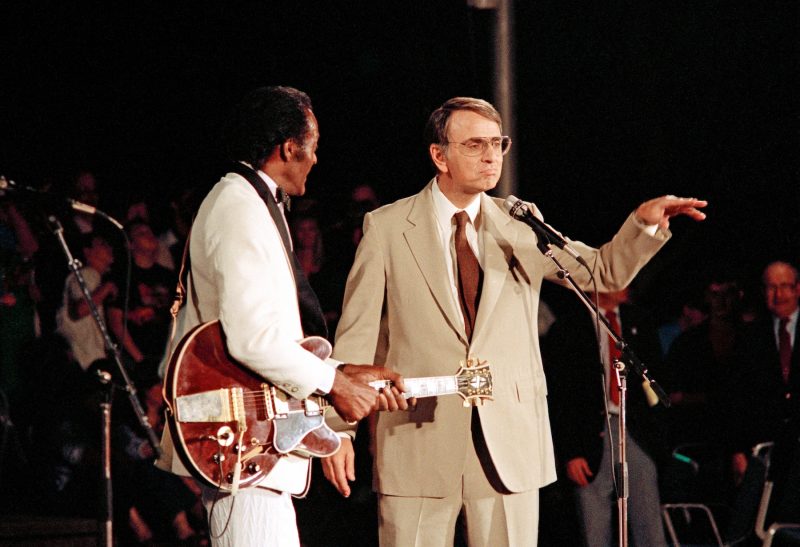 Chuck Berry (l) and Carl Sagan (r) at a Voyager 2 Neptune flyby celebration in August 1989. Berry’s song Johnny B. Goode is the only rock ‘n’ roll song on the Golden Records currently traveling into interstellar space aboard Voyagers 1 and 2. Image via NASA.

Of course, the Voyagers’ achievements extend far beyond that historic week three decades ago. Both probes have now entered interstellar space after exiting the heliosphere – the protective bubble around the planets created by a high-speed flow of particles and magnetic fields spewed outward by our sun.

They are reporting back to Earth on the “weather” and conditions from this region filled with the debris from stars that exploded elsewhere in our galaxy. They have taken humanity’s first tenuous step into the cosmic ocean where no other operating probes have flown.

Voyager data also complement other missions, including NASA’s Interstellar Boundary Explorer (IBEX), which is remotely sensing that boundary where particles from our sun collide with material from the rest of the galaxy. And NASA is preparing the Interstellar Mapping and Acceleration Probe (IMAP), due to launch in 2024, to capitalize on Voyager observations.

The Voyagers send their findings back to DSN antennas with 13-watt transmitters – about enough power to run a refrigerator light bulb. Stone said:

Every day they travel somewhere that human probes have never been before. Forty-two years after launch, and they’re still exploring.

For more information about the Voyager mission visit https://voyager.jpl.nasa.gov/

For more images of Neptune taken by Voyager 2 visit https://voyager.jpl.nasa.gov/galleries/images-voyager-took/neptune/ 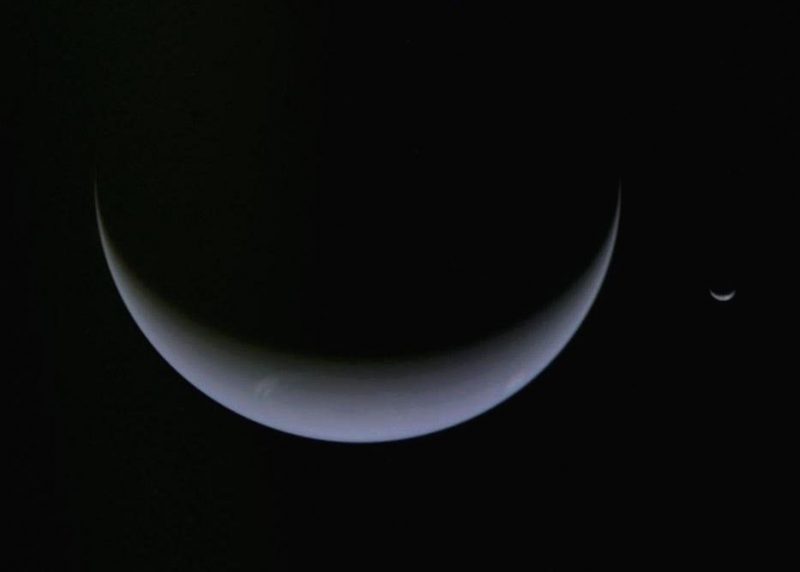 Neptune and its large moon Triton, via Voyager 2.

Bottom line: It’s been 30 years since Voyager 2 visited Neptune, as part of the Voyagers’ Grand Tour of our solar system’s four giant planets. As of today, no other earthly spacecraft has returned to Neptune.