Scientists are traveling to Tibet this summer to explore places that might be possible earthly analogs to regions on Mars once suitable for life. 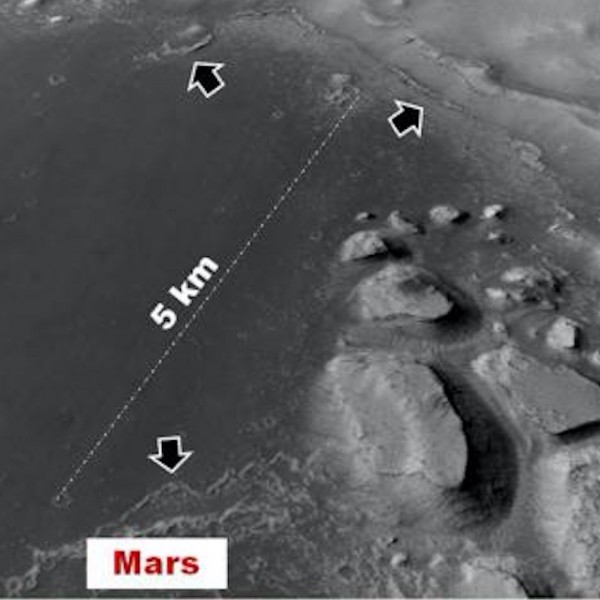 The floor of a basin on Mars where Rodriguez and others propose in this investigation that shallow lakes could have formed. These lakes could have provided an abode for life, these scientists say. Image via PSI.

For some time, scientists have been speculating on possible ancient shallow lakes on Mars, and their suitability for Martian life. This week (February 9, 2016), researchers pointed to a place on Mars where groundwater circulation beneath a massive tectonic rift zone – located along the flanks of some our solar system’s largest ancient volcanos – resulted in the formation of some the deepest basins on Mars more than three billion years ago. These basins may have been shallow lakes, filled with water as recently as the last few tens of millions of years, and thus this region may have been an abode for Mars life, these researchers say.

J. Alexis Palmero Rodriguez is lead author of a new study exploring the link between volcanos, ancient lakes and Mars life, which appears in the journal Planetary and Space Science. He said in a statement at website of the Planetary Science Institute, where he’s a senior scientist:

The temperature ranges, presence of liquid water, and nutrient availability, which characterize known habitable environments on Earth, have higher chances of forming on Mars in areas of long-lived water and volcanic processes.

Existing salt deposits and sedimentary structures of possible emplacement within Martian paleo-lakes are of particular astrobiological importance when looking for past habitable areas on Mars.

This is particularly true if the discharge of early Mars groundwater, perhaps liked to hydrothermal systems that were active for billions of years, contributed to the formation of the paleo-lakes, as it is proposed in this investigation.

Working in collaboration with the Chinese government, Rodriquez will visit Tibet this summer to investigate sites that may be analogs for similar environments on Mars. He said:

The detection of paleo-lake sites on Mars is particular challenging because under the planet’s frigidly cold and thin atmosphere, their ponded water would have behaved differently than on Earth

In this research we propose a Tibetan region where high mountain lakes show unique sets of landforms that might explain some basin interior features in the studied region of Mars.

The researchers said a key objective of the planned field expedition is to investigate the bizarre shoreline features seen on both Mars and Earth (see photos below) and characterize their potential for life on Mars. 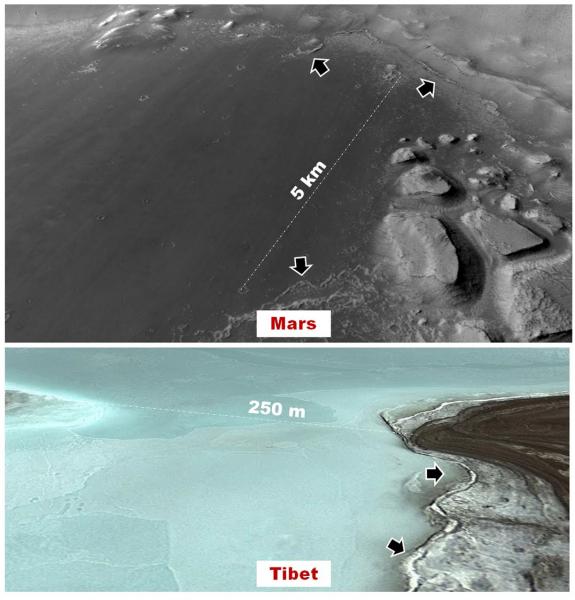 Top, the floor of a basin where Rodriguez and others propose in this investigation that shallow lakes could have formed within the last few tens of millions of years on Mars. Below, the floor of a proposed Martian analog high mountain lake in the Tibetan plateau, where Rodriguez will conduct a field investigation this coming summer. The arrows in both panels identify similar ridges that surround the basin’s floor. In the Tibetan lake case, the ridges are thought to form as sediments are pushed outwards by the freezing waters. These types of ridges might be diagnostic shoreline feature of lakes that formed under extremely cold and dry Martian conditions. Image via PSI.

Bottom line: Scientists exploring the connection between ancient lakes and tectonic activity on Mars are traveling to Tibet this summer to explore regions that might be possible earthly analogs.