The normally bland face of Uranus has become increasingly stormy, with enormous cloud systems so bright astronomers can see details in the planet’s hazy blue-green atmosphere. 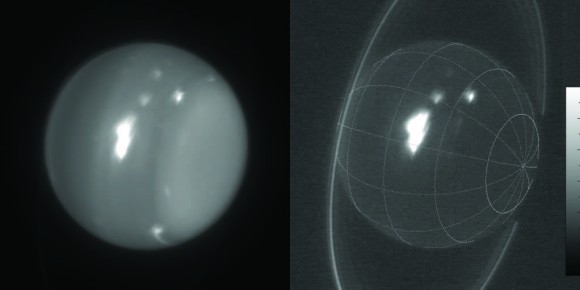 Infrared images of Uranus (1.6 and 2.2 microns) obtained on Aug. 6, 2014, with adaptive optics on the 10-meter Keck telescope. The white spot is an extremely large storm that was brighter than any feature ever recorded on the planet in the 2.2-micron band. The cloud rotating into view at the lower-right limb grew into the large storm that was seen by amateur astronomers at visible wavelengths. Image credit: Imke de Pater (UC Berkeley) & Keck Observatory. 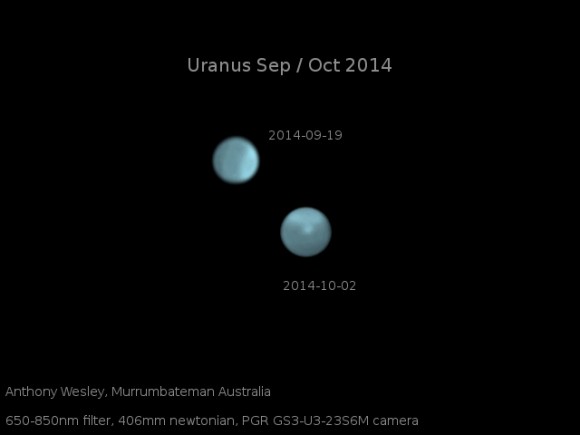 Optical images of Uranus on Sept. 19 and Oct. 2, showing the dramatic appearance of a bright storm on a planet that normally displays only a diffuse bright polar region. Image courtesy of amateur astronomer Anthony Wesley, Murrumbateman, Australia.

This year, astronomers – both professional and amateur, have been able to see extreme storms on the usually bland visible surface of planet Uranus.

The weather on Uranus is incredibly active, say scientists, but they’re not sure why. Heidi Hammel of the Association of Universities for Research in Astronomyis part of the team that first noticed the activity when observing the planet with adaptive optics on the W. M. Keck Observatory in Hawaii. She said:

This type of activity would have been expected in 2007, when Uranus’s once-every-42-year equinox occurred and the sun shined directly on the equator. But we predicted that such activity would have died down by now. Why we see these incredible storms now is beyond anybody’s guess.

In all, the team detected eight large storms on Uranus’s northern hemisphere when observing the planet with the Keck Observatory on August 5 and 6. One was the brightest storm ever seen on Uranus.

When amateur astronomers heard about the activity, they turned their telescopes on the planet and were amazed to see a bright blotch on the surface of a normally boring blue dot.

French amateur astronomer Marc Delcroix works for an auto-parts supplier in Toulouse and has been observing the skies – Jupiter in particular – with his backyard telescope since 2006. Delcroix said:

I was thrilled to see such activity on Uranus. Getting details on Mars, Jupiter or Saturn is now routine, but seeing detail on Uranus and Neptune is the new frontier for us amateurs and I did not want to miss that. I was so happy to confirm myself these first amateur images on this bright storm on Uranus, feeling I was living a very special moment for planetary amateur astronomy.

Interestingly, the extremely bright storm seen by the 10-meter Keck II telescope in the near infrared is not the one seen by the amateurs, which is much deeper in the atmosphere than the one that initially caused all the excitement.

Uranus is an ice giant, about four times the diameter of Earth, with an atmosphere of hydrogen and helium, with just a bit of methane to give it a blue tint. Because it is so distant – 19 times farther from the sun than Earth – astronomers were able to see little detail on its surface until adaptive optics on both Keck Observatory telescopes revealed features much like those on Jupiter.

Because Uranus has no internal source of heat, its atmospheric activity was thought to be driven solely by sunlight, which is now weak in the northern hemisphere. Hence astronomers were surprised when these observations showed such intense activity.