Check out this image from the Mars Reconnaissance Orbiter, showing tire tracks on Mars left by the Curiosity rover.

In the image below, released by NASA this week (September 6, 2012), you can see tire tracks on Mars, left from the first drives of NASA’s Curiosity rover. Another NASA spacecract – the Mars Reconnaissance Orbiter, which has been orbiting Mars since early 2006 – captured this image. The rover is seen where the tracks end. 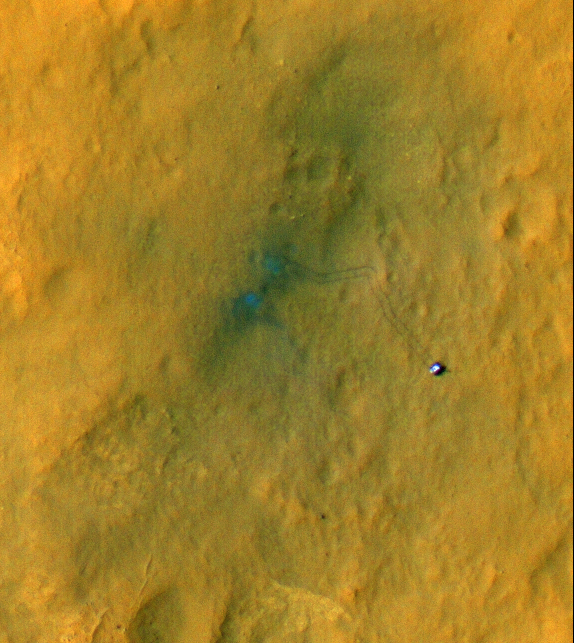 Tracks from the first drives of NASA’s Curiosity rover as seen by the Mars Reconnaissance Orbiter, which has been orbiting Mars since early 2006. The rover is seen where the tracks end.

Other rovers have left tracks on Mars, but not as deep or wide as those from Curiosity, which is significantly larger than previous rovers.

On September 4, Curiosity completed a drive of 100 feet (30.5 meters). This was during the mission’s Sol 29 – its 29th Martian day. The rover is traveling southeastward and made a zigzag move partway through the drive in order to skirt some sand. This was the mission’s longest drive so far and brought total driving distance to 358 feet (109 meters). 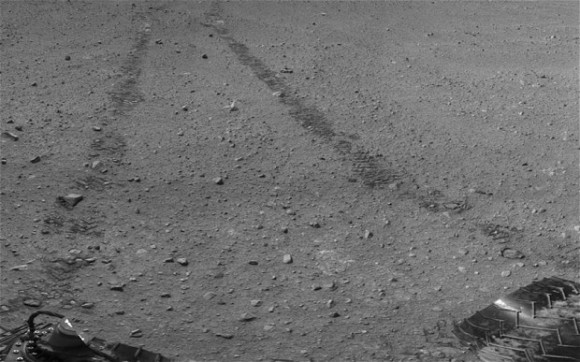 Tire tracks on Mars from Curiosity rover, which landed on the planet August 5-6, 2012. This mosaic of images was taken by Curiosity’s Navigation Camera. Image credit: NASA

Curiosity will not be traveling for several days, while space engineers check out its robotic arm. At the end of that arm is an array of scientific instruments designed to test rocks and the chemicals in the Martian soil, in Curiosity’s quest for the ingredients that could support life.

Bottom line: On September 6, NASA released an image from its Mars Reconnaissance Orbiter, showing tire tracks on Mars left from the first drives of the Curiosity rover.