Video: The solar system to scale

Beautiful short film depicting what happened when a group of friends built a scale model of the solar system on a dry lakebed in Nevada.

At first I thought I wouldn’t watch this, because it’s 7 minutes long. But then I did watch it, and I’m glad I did, because it’s a beautiful and touching depiction of the relationship between solid matter and empty space in our solar system. As the producers of the film – Wylie Overstreet and Alex Gorosh – point out, that relationship isn’t well understood by most of us. It’s impossible to capture in all the illustrations we’ve seen of our planets and sun because the planets are just so minuscule in contrast to the vast space of our own solar system, our local neighborhood of space. Any illustrations you’ve seen on paper or your computer screen just haven’t captured the matter-to-space relationship as it truly is.

That’s why these producers went to a dry lakebed in Nevada to make their film.

Some things I love about the film … the concept, of course, is wonderful, showing the planets and their orbits to the correct scale. But I also love the part of the film where the real sun rises and looks – from the “orbit” of their model Earth, a large marble – the same size as their model sun, which is a big illuminated ball about a meter-and-a-half wide. And I also love it when they say that, of the billions of people who live on Earth today or have ever lived on Earth, only 24 people have ever seen Earth as a ball in space with their own eyes.

Watch this film. It might change your concept of the world under your own feet. 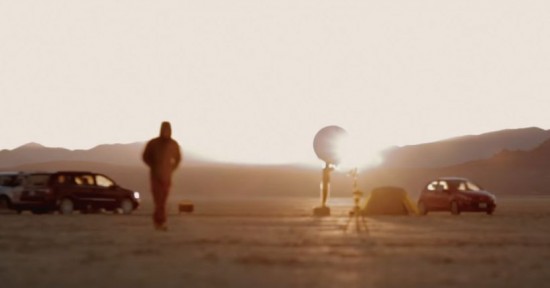 Video still from ‘To Scale: The Solar System’ by Wylie Overstreet and Alex Gorosh.

Bottom line: Film depicting a scale model of the solar system, built on a dry lakebed in Nevada, produced by Wylie Overstreet and Alex Gorosh.