Video of Andromeda Galaxy in many colors

Rainbow colors from our neighboring galaxy – some invisible to the eye, but visible to ESA telescopes – reveal the life cycle of stars.

Space telescopes launched and maintained by the European Space Agency (ESA) have captured the Andromeda Galaxy – also known as M31, the nearest large spiral galaxy to our Milky Way – in different wavelengths or colors of the electromagnetic spectrum. With the exception of visible light, which is just one small part of the electromagnetic radiation spectrum, these colors are invisible to the eye. And yet each wavelength or color shows a different aspect of the galaxy’s nature, as the video below illustrates.

Wavelengths that are invisible to us are visible to orbiting telescopes such as the ones from ESA.

For example, ESA’s Planck spacecraft collects microwaves, at the long wavelength end of the electromagnetic spectrum. Microwaves reveal particles of incredibly cold dust at just a few tens of degrees above a temperature of absolute zero.

ESA’s Herschel space telescope observes shorter, infrared wavelengths and reveals dust of slightly higher temperature. In the spiral arms of the Andromeda Galaxy, this dust marks the area where new stars are being born. 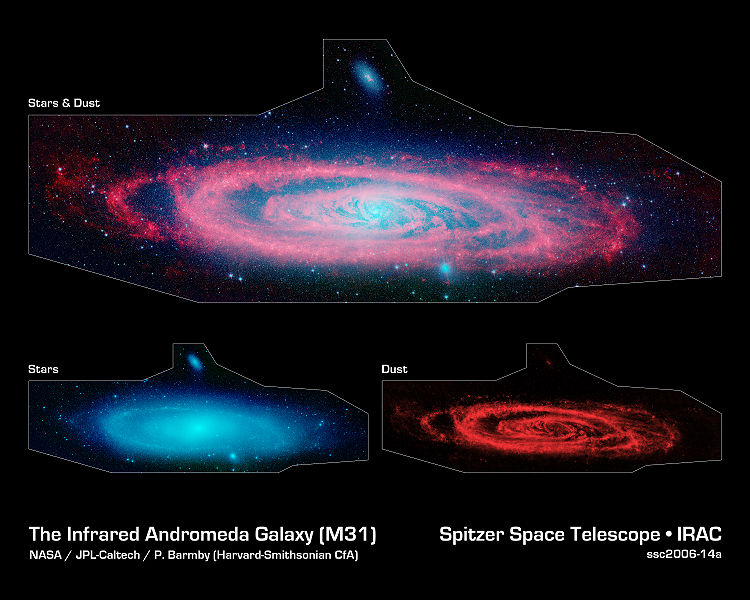 The XMM-Newton telescope detects ultraviolet light and X-rays. These wavelengths or colors show older stars, many nearing the end of their lives, and also stars that have already exploded, sending shockwaves through space. By monitoring the core of Andromeda since 2002, XMM-Newton has revealed many variable stars, some of which have undergone large stellar detonations known as novae. 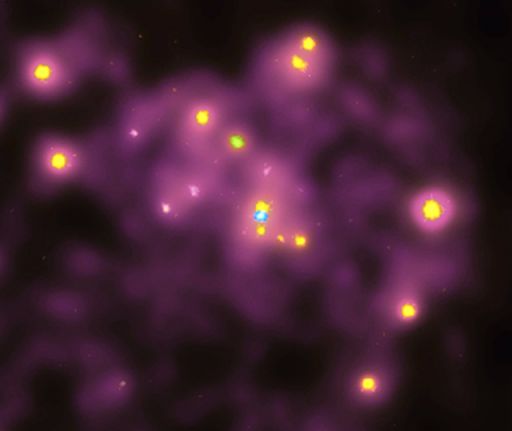 X-rays from the center of Andromeda. Image Credit: NASA

Ultraviolet wavelengths also display the light from extremely massive stars. These are young stars that will not live long, as they exhaust their nuclear fuel and explode as supernovae typically within a few tens of millions of years after they are born. The UV light is usually absorbed by dust and re-emitted as infrared; the areas where UV light is seen directly correspond to relatively clear, dust-free parts of Andromeda.

By capturing a spectrum of light from Andromeda, the European Space Agency (ESA) has created imagery that assists astronomers in following the life cycle of the stars.

Best ever portrait of Andromeda galaxy in ultraviolet