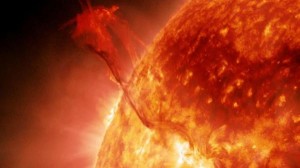 A huge filament of super-hot plasma, nicknamed the Dragon Tail by solar scientists. It erupted from the sun on January 31, 2013. Image via NASA’s Solar Dynamics Observatory.

Thank you! Your submission has been received!
Oops! Something went wrong while submitting the form.
END_OF_DOCUMENT_TOKEN_TO_BE_REPLACED