Video: Golden ring, and dragon tail, from our sun

Posted by David Callejas and Deborah Byrd in Space | February 3, 2013

Our sun is an awesome, life-giving energy machine. Containing more than 99.8% of the total mass of our solar system (Jupiter contains most of the rest, says the great Nine Planets website), it converts about 700,000,000 tons of hydrogen to about 695,000,000 tons of helium every second, via thermonuclear fusion in its interior. In the process, the sun creates about 5,000,000 tons (=3.86e33 ergs) of energy that eventually makes its way to the sun’s surface to be released as the light and warmth that, among other things, sustains all life on Earth. On January 31, 2013, the sun belched energy in two particularly lovely features, both of which were caught on video by NASA’s Solar Dynamics Observatory.

One feature had the shape of the ring, and the other lashed out like a dragon’s tail. 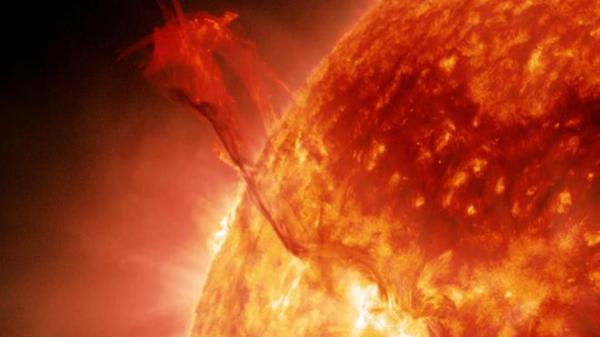 On January 31, 2013, a huge filament of super-hot plasma erupted from the sun. Scientists nicknamed it the Dragon Tail. Image via NASA’s Solar Dynamics Observatory.

This first video shows a variety of views of the break-up of the Dragon Tail filament on January 31, 2013. Solar filaments are not the same as coronal mass ejections, or CMEs (although there was a CME on January 31, too, described below). Filaments are anchored to the sun’s surface in its photosphere – or visible surface – and extend outwards hundreds of kilometers into the sun’s hot outer atmosphere, called the corona. Filaments tend to form over timescales of about a day, and the more stable ones may persist in the corona for several months. The January 31 Dragon Tail filament did not persist, though. The entire event lasted approximately 4 hours, and nothing was released from the sun. The materials in the filament fell back to the sun’s surface due to the pull of gravity.

But there was another event on January 31 that did release material from the sun into space. It was coronal mass ejection (CME), accompanied by an unusual, ring-shaped prominence. 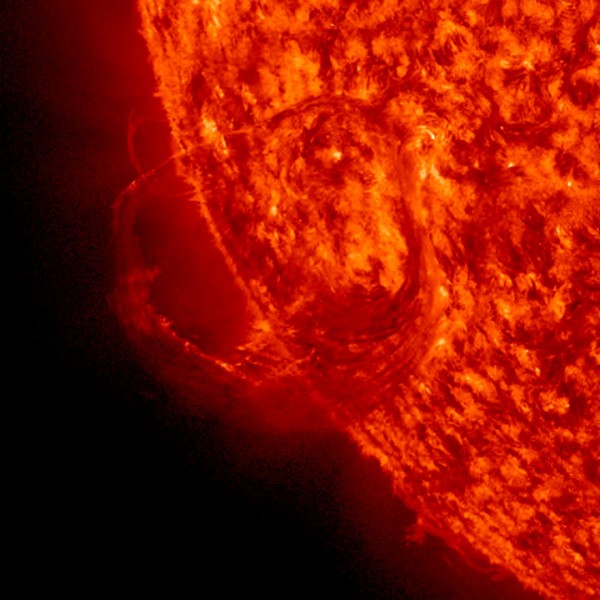 NASA scientists said they did not recall ever seeing this before: a ring-shaped prominence that lay flat above the sun’s surface on January 31, 2013. Image via NASA’s Solar Dynamics Observatory.

On January 31, 2013 at 2:09 EST (6:09 UTC) the sun erupted with an Earth-directed coronal mass ejection (CME). It left the sun at a speed that is about average for CMEs: 575 miles (925 kilometers) per second. It was accompanied by an unusual ring-shaped solar prominence – really, the same thing as a filament, but viewed against a different background – that lay flat above the sun’s surface. On the video, look in the lower left of the sun for the ring-shaped feature. It marks the spot of the CME’s eruption.

When a CME is aimed towards the Earth, it might cause a geomagnetic storm. EarthSky astronomy blogger Christopher Crockett explains this event:

If we see any photos from geomagnetic activity caused by the January 31 CME, we’ll post them here!

Bottom line: Photos and video of the ringed-shaped coronal mass ejection from the sun, and the Dragon Tail solar filament, on January 31, 2013.

What are coronal mass ejections? By Christopher Crockett

What’s the difference between a filament and a prominence on the sun?