On Earth, a fast runner takes a few hours to complete a marathon. On Mars, it took the Opportunity rover 11 years. New short video on Opportunity’s marathon trek.

This year, NASA’s Mars rover Opportunity completed its first Red Planet marathon – 26.219 miles – with a finish time of roughly 11 years and two months. The new video above – released on May 14, 2015 – tells the story. At the time, Opportunity principal investigator Steve Squyres at Cornell said:

Opportunity’s mission is to search for signs of ancient water on Mars. Today the Red Planet has a breathtakingly thin atmosphere, with conditions deadly to almost every known form of life on Earth.

Billions of years ago, however, things might have been different. Many researchers believe that Mars was once warmer, wetter, and friendlier to potential Martian life. Opportunity’s job is to search for clues to that ancient time. 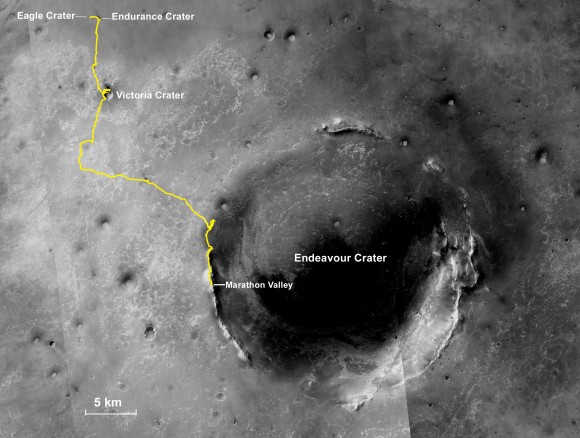 This map shows the rover’s entire traverse from landing to the end of Opportunity’s 26.219-mile marathon on Mars. Image via NASA/JPL-Caltech/MSSS/NMMNHS