Comet PANSTARRS closest to the sun in early March

Whether you’ve managed to glimpse the comet or not, you’ll love this video showing PANSTARRS as seen from space. Bright dot on the right is Earth!

Whether you’ve managed to glimpse Comet PANSTARRS in the night sky or not, you’ll love these two vidoes of PANSTARRS. The first is from NASA’s solar monitoring spacecraft STEREO-B, located on the sun’s far side as seen from Earth. The on-board space telescope snapped hundreds of images of the comet as it rounded the sun from March 9 to 16, 2013 (it was closest on March 10). This video, which I first spotted on National Geographic’s site, is thanks to analyst Karl Battams of the Naval Research Lab, who stitched together the images.

Hard to believe, isn’t it, that this is the same comet so many are struggling to glimpse in the sunset sky? PANSTARRS is still there, by the way, but you have to look hard to see it. 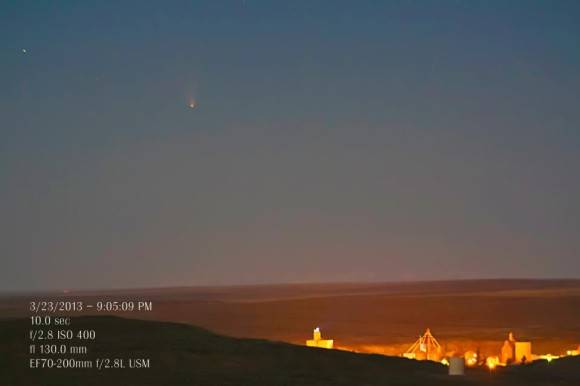 Comet PANSTARRS on March 23, 2013 from our friend Susan Gies Jensen in Odessa, Washington. She said, “Was lucky to have a clear night sky last night and to find PANSTARRS (after looking for weeks)! It is pretty dim and the night was bright with the waxing Moon, but I was able to find the comet with binoculars.”

The images in the movie above were captured by the Heliospheric Imager (HI), an instrument that looks to the side of the sun to watch coronal mass ejections (CMEs) as they travel toward Earth. The bright light on the left comes from the sun and the bursts from the left represent the solar material erupting off the sun in a CME. While it appears from STEREO’s point of view that the CME passes right by the comet, the two are not lying in the same plane, which scientists know since the comet’s tail didn’t move or change in response to the CME’s passage.