Vesta: An asteroid or not an asteroid?

The asteroid Vesta will soon get a visitor. The Dawn spacecraft will enter Vesta orbit in July, 2011. In the meantime, scientists and media are turning their gaze toward this little world.

Scientists and media are turning their focus in on the large asteroid Vesta, which has an estimated 9% of the mass of the entire asteroid belt and is the second-biggest object in the belt after Ceres. The increase in scrutiny is because Vesta is soon to get a visitor. In July 2011, NASA’s Dawn spacecraft will go into orbit around Vesta to take a closer look at this survivor from the beginning of our solar system. The spacecraft will map Vesta’s terrain, analyze its surface composition, and precisely measure its gravity to determine internal structure. 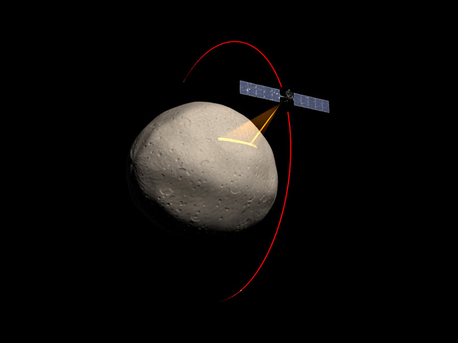 The Delta II rocket carrying the Dawn spacecraft launched from Cape Canaveral, Florida in September 2007. After orbiting Vesta for one year, Dawn will head over to the dwarf planet Ceres.

As the arrival at Vesta approaches, scientists are talking the talk about Vesta. What talk? Well, for one thing, NASA issued a press release this week titled When is an Asteroid Not an Asteroid. That NASA release quoted Tom McCord, who is a Dawn co-investigator based at the Bear Fight Institute, Winthrop, Wash. Back in the 1970s, McCord and his colleagues found that Vesta has a basaltic rock surface. Scientists suspect the basalt flowed from Vesta’s molten interior 4.5 billion years ago. McCord was quoted as saying:

I don’t think Vesta should be called an asteroid. Not only is Vesta so much larger, but it’s an evolved object, unlike most things we call asteroids.

In fact, Vesta is known to have layers like the Earth: crust, mantle, core.

This gritty little protoplanet has survived bombardment in the asteroid belt for over 4.5 billion years, making its surface possibly the oldest planetary surface in the solar system. Studying Vesta will enable us to write a much better history of the solar system’s turbulent youth.

Vesta and Ceres are the two most massive members of the asteroid belt, which lies between Mars and Jupiter. Scientists suspect that the belt may have formed during the beginnings of our solar system. Typically, planets form from the accretion (addition) of separate smaller objects. Jupiter”s gravity may have interfered with this process, creating a belt of protoplanets. Collisions reduced the size of most of the protoplanets, increasing the number of asteroids and moving them to other parts of the solar system. Vesta has remained mostly intact.

Vesta was discovered on March 29, 1807 by Heinrich Wilhelm Olbers of Germany and was the fourth asteroid discovered. Vesta is so bright that it’s the only asteroid that can be seen with the unaided eye, if you know where and how to look. This object is about 578 by 560 by 458 kilometers, or approximately the length of the state of Arizona.

Vesta also has an intriguingly large crater on its south pole. Dawn will study the crater as well as the composition of the protoplanet’s surface.

Ceres will be the next stop on Dawn’s voyage. Ceres is the largest asteroid and has recently been reclassified as a dwarf planet. It was discovered on January 1, 1801 by Giuseppe Piazzi of Italy – the first asteroid/dwarf planet discovered. It is 975 by 909 kilometers, about the size of Texas. Ceres is nearly spherical and has denser material at the core than near the surface. Scientists suspect that water-ice might be buried under Ceres’s crust and it could even have frost-covered polar caps. Dawn is expected to enter orbit around Ceres in February 2015 and leave July 2015.

Dawn is the ninth project in NASA’s Discovery Program, intended as a series of low-cost scientific missions to objects in our solar system. When Dawn is done with its mission, we will have a better understanding of Ceres and Vesta and the formation of our solar system. At that time, will Vesta still be considered an asteroid? Probably. But is it possible the forces of solar system nomenclature might indeed start raging around Vesta, as they did around Pluto?