Venus was once more Earth-like, but climate change made it uninhabitable

A severe climate change event on Venus may have transformed an Earth-like climate to the current uninhabitable-to-humans state. 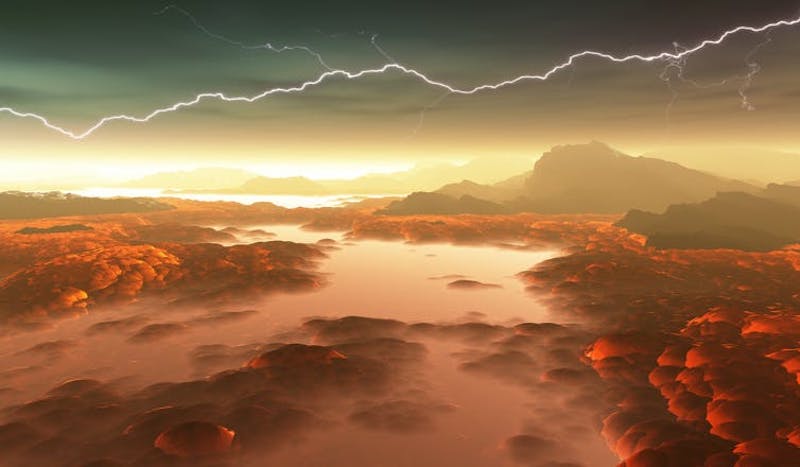 An artist’s rendering of the surface of Venus. Image via Shutterstock/ The Conversation.

We can learn a lot about climate change from Venus, our sister planet. Venus currently has a surface temperature of 840 degrees F (450 degrees C) – the temperature of an oven’s self-cleaning cycle – and an atmosphere dominated by carbon dioxide (96%) with a density 90 times that of Earth’s.

Venus is a very strange place, totally uninhabitable, except perhaps in the clouds some 40 miles (60 km) up where the recent discovery of phosphine may suggest floating microbial life. But the surface is totally inhospitable.

However, Venus once likely had an Earth-like climate. According to recent climate modeling, for much of its history Venus had surface temperatures similar to present day Earth. It likely also had oceans, rain, perhaps snow, maybe continents and plate tectonics, and even more speculatively, perhaps even surface life.

Less than one billion years ago, the climate dramatically changed due to a runaway greenhouse effect. It can be speculated that an intensive period of volcanism pumped enough carbon dioxide into the atmosphere to cause this great climate change event that evaporated the oceans and caused the end of the water cycle.

This hypothesis from the climate modelers inspired Sara Khawja, a master’s student in my group (co-supervised with geoscientist Claire Samson), to look for evidence in Venusian rocks for this proposed climatic change event.

Since the early 1990s, my Carleton University research team – and more recently my Siberian team at Tomsk State University – have been mapping and interpreting the geological and tectonic history of Earth’s remarkable sister planet.

Soviet Venera and Vega missions of the 1970s and 1980s did land on Venus and take pictures and evaluated the composition of the rocks, before the landers failed due to the high temperature and pressure. However, our most comprehensive view of the surface of Venus has been provided by NASA’s Magellan spacecraft in the early 1990s, which used radar to see through the dense cloud layer and produce detailed images of more than 98% of Venus’s surface.

A visualization of Venus’s surface produced by radar on board the Magellan spacecraft.

Our search for geological evidence of the great climate change event led us to focus on the oldest type of rocks on Venus, called tesserae, which have a complex appearance suggestive of a long, complicated geological history. We thought that these oldest rocks had the best chance of preserving evidence of water erosion, which is a such an important process on Earth and should have occurred on Venus prior to the great climate change event.

Given poor resolution altitude data, we used an indirect technique to try to recognize ancient river valleys. We demonstrated that younger lava flows from the surrounding volcanic plains had filled valleys in the margins of tesserae.

To our astonishment these tesserae valley patterns were very similar to river flow patterns on Earth, leading to our suggestion that these tesserae valleys were formed by river erosion during a time with Earth-like climatic conditions. My Venus research groups at Carleton and Tomsk State universities are studying the post-tesserae lava flows for any geological evidence of the transition to extremely hot conditions. 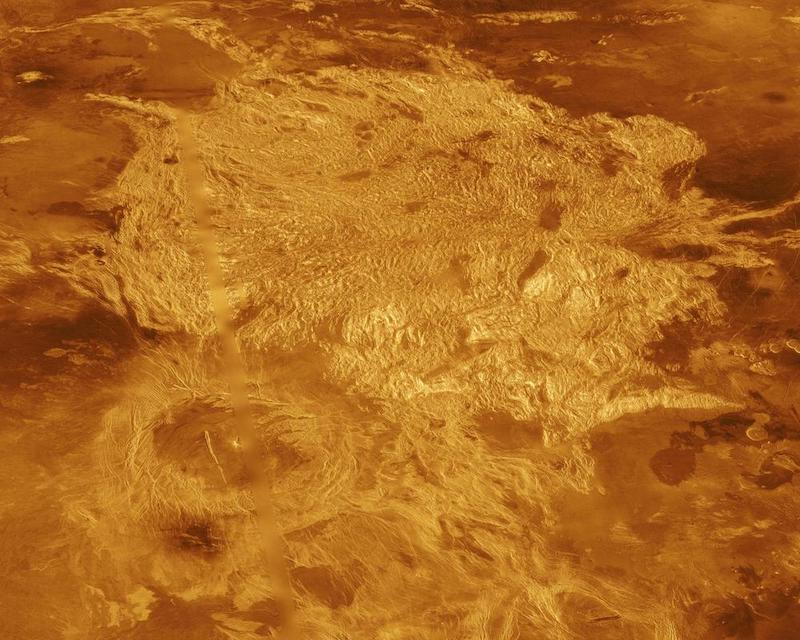 A portion of Alpha Regio, a topographic upland on the surface of Venus, was the first feature on Venus to be identified from Earth-based radar. Image via NASA-JPL.

In order to understand how volcanism on Venus could produce such a change in climate, we can look to Earth history for analogs. We can find analogies in super-eruptions like the last eruption at Yellowstone that occurred 630,000 years ago.

But such volcanism is small compared to large igneous provinces (LIPs) that occur approximately every 20-30 million years. These eruption events can release enough carbon dioxide to cause catastrophic climate change on Earth, including mass extinctions. To give you a sense of scale, consider that the smallest LIPs produce enough magma to cover all of Canada to a depth of about 30 feet (10 meters). The largest known LIP produced enough magma that would have covered an area the size of Canada to a depth of nearly 5 miles (8 km).

If LIP-style volcanism was the cause of the great climate change event on Venus, then could similar climate change happen on Earth? We can imagine a scenario many millions of years in the future when multiple LIPs randomly occurring at the same time could cause Earth to have such runaway climate change leading to conditions like present-day Venus.

Bottom line: Venus has a surface temperature of 840 degrees F (450 degrees C) and an atmosphere dominated by carbon dioxide, with a density 90 times that of Earth’s. However, for much of its history, Venus likely had an Earth-like climate, with oceans, rain, perhaps snow, maybe continents and plate tectonics, and even more speculatively, perhaps even surface life. Then, less than a billion years ago, Venus’ climate dramatically changed due to a runaway greenhouse effect.