Venus and Jupiter dance in daylight

Most of us think only of viewing planets at night, but sometimes you can catch them in broad daylight! The next great chance to do that is Saturday, June 20. 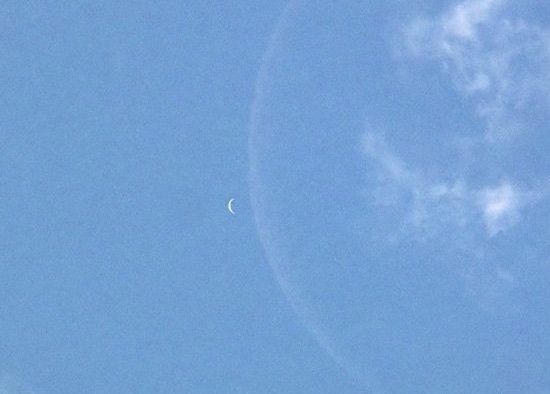 Telescopic view of daytime Venus (l) and moon via NASA

You may have seen that Venus and Jupiter are drawing closer daily in the western dusk, heading toward a very close approach on June 30, 2015. If not, see “check out this video on the jaw-dropping Venus/Jupiter encounter.  What you may not know is that this event also offers several very good opportunities to catch both of these planets in broad daylight. The first series is June 19 through 21. The second is on and around June 30 itself. Determined observers can find Venus easily enough before and after that as well.

Venus is frequently (and fairly easily) observable in broad daylight, but only if you know exactly where to look. To make it easier, it’s always best to have a celestial “landmark” nearby. On June 19 through 21, the waxing crescent moon passes near both Venus and Jupiter. It should make for a spectacular view just after sunset! But, if you can locate the moon before sunset, you can use the moon to steer you to bright Venus as well. 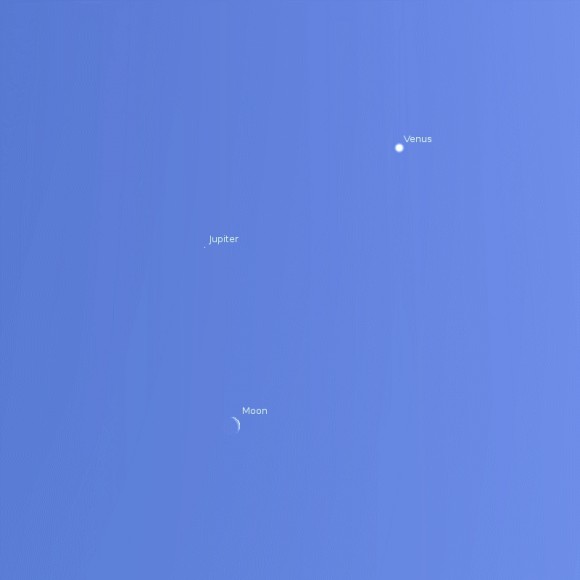 The image above shows the crescent moon along with Venus and Jupiter on June 20 as it crosses the meridian – the midline in the sky, extending from due north to due south. The chart is set for Denver, Colorado, but Venus and Jupiter will be near the moon as seen from around the world on this date.

Brilliant as it is, during daylight hours Venus appears as a tiny bright speck in the sky, easily missed but quite prominent when you find it.

Jupiter, however, is not bright enough to make this easy, so finding it with the unaided eye may not be possible. Still, you may be able to locate it in binoculars focused on infinity. The key here is to determine beforehand where Venus and/or Jupiter will appear relative to the moon. The best way to do this is with software, such as Stellarium, which is free and online. Another good one is Starry Night, which is available for a fee. Once you have this sort of software, you can accurately set for your specific geographic location and time.

Finding a crescent moon during the day isn’t always extremely easy, either, but knowing to look due south (or north, if you’re in the Southern Hemisphere) at the time of meridian crossing – called transit by astronomers – helps. This U.S. Naval Observatory page will let you find transit times for the moon and planets, and be sure to look at the bottom of this article for information on how to use the U.S. Naval Observatory page.

Once you find the moon, finding Venus should be easy, although finding Jupiter may still be a challenge requiring binoculars. 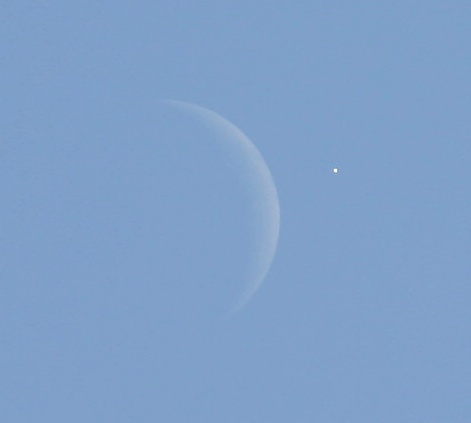 Daylight observation of moon and Venus in 2012 via Martin Powell at nakedeyeplanets.com 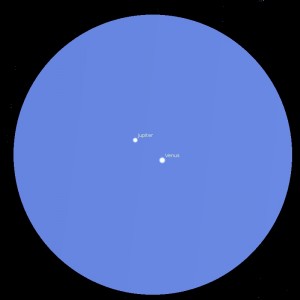 Simulated binocular view of Venus and Jupiter encounter on June 30. It shows a binocular field centered on Venus. Although much fainter, Jupiter is visible to the upper left. Image courtesy of Stellarium.

The second series of opportunities to see these objects in daylight centers around June 30, which is the date of the closest approach between Venus and Jupiter. On this date, Venus and Jupiter will appear closer in our sky than they will again until August of 2016.

However, on June 30, there will be no moon to serve as a landmark. Knowing when to look in a particular direction is essential. Specifically, you need to determine the exact time when Venus passes the meridian. That is, you need to know when Venus is due south in the sky (or, from the Southern Hemisphere, due north) from your location.

Then you can scan the southern (or northern) sky with binoculars until you find it.

Once located, you can refer to software for the relative position of Jupiter (if needed).

1. Notice you can see for U.S. locations (top of page) or worldwide locations (bottom of page).

2. Set your location, and the date you want.

3. Select Venus as the “Celestial object of interest.”

4. Select “Compute data.” On the resulting page you will see the transit time and altitude of Venus above your horizon.

5. Note: The heading “Transit Alt.” may seem like one column, but it actually is two, one for transit time and the other for altitude in degrees. For example, if it lists the transit time as 16:10 and altitude as 65, that means that Venus will be due south (or north) at 4:10 pm at your location, and it will be about 65 degrees above the southern horizon. That’s a bit more than two-thirds of the way up to the zenith, or highest point in the sky.

Remember that the exact positions of Jupiter, Venus and the moon change depending on the time and geographic location of the observer. Information for June 19 will not be valid for June 20. Be sure to use the information for your location and your observing time.

Have fun with the daylight observation, and remember … never look at the sun without proper eye protection! 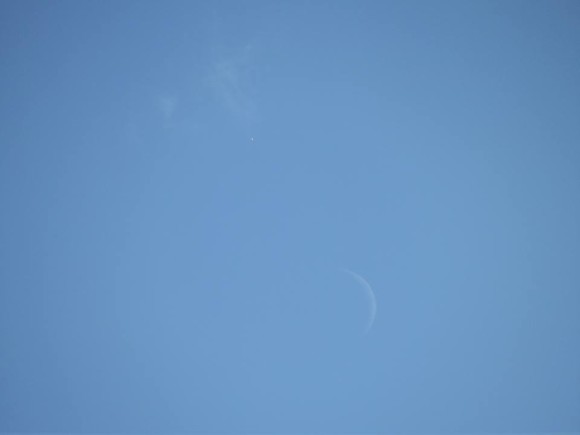 Venus and moon in daylight on September 8, 2013, as captured by Enrique Fiset in Canada.

Bottom line: Venus and Jupiter are drawing exceptionally close in the evening sky, but don’t wait for sunset. Given a little preparation and reasonable eyesight, you can catch them before the sun goes down.