Check out this beautiful photo of Venus, only 8 hours before it passed more or less between the Earth and sun on January 11, 2014.

Remember the wonderful transit of Venus in June of 2012, when this world – next inward in orbit around the sun – passed directly in front of the sun as seen from Earth? On that day, astronomers would have said that Venus was in inferior conjunction to the sun. Both Venus and the Earth are moving, and so it takes 584 days – or about 1 year, 7 months – for Venus to gain a lap on Earth and pass between us and the sun again. It has now been 584 days since that 2012 transit of Venus, and this inner planet crossed, more or less, between us and the sun today (January 11, 2014). Shahrin Ahmad in Malaysia captured Venus about 8 hours before inferior conjunction. 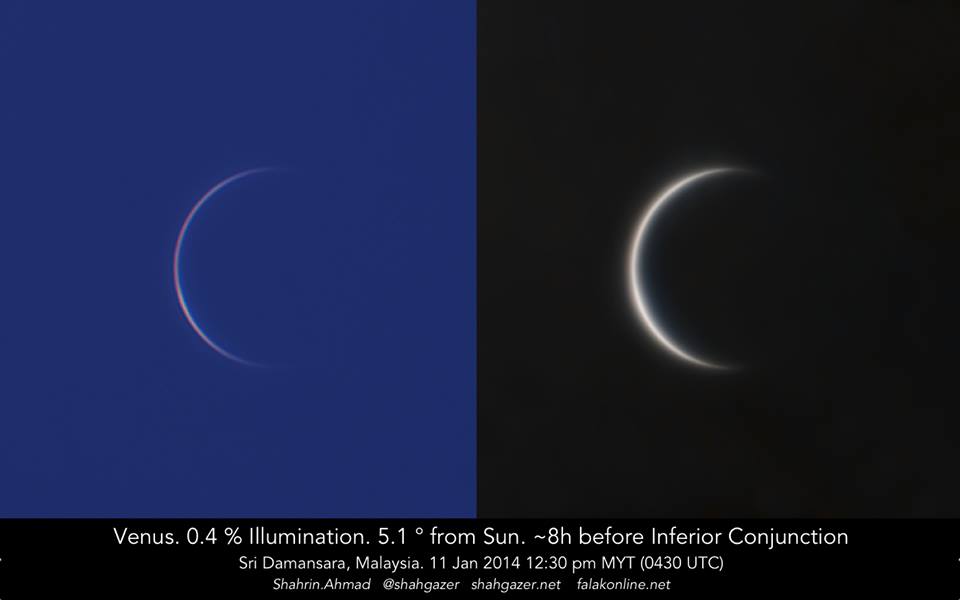 View larger. | The planet Venus, about 8 hours before the January 11, 2014 inferior conjunction. The daylight hemisphere of the planet is facing almost entirely away from Earth. Photo by EarthSky Facebook friend Shahrin Ahmad in Malaysia. Thank you, Shahrin! Visit Shahrin’s blog and photo gallery.

At this 2014 inferior conjunction of Venus, the planet did not pass directly in front of the sun. A transit of Venus is a very rare event. It won’t happen again until the year 2117. On January 11, Venus passed about 5 degrees N. of the sun as seen from Earth. Shahrin Ahmad wrote:

Around 12.30 p.m. local noon time, there was a brief of good seeing, and probably the best one so far. Suits nicely as a parting shot. After that the sky seeing began to deteriorate really fast!

Even without stretching the original photo, we can easily see how the crescent has reach beyond 180 degrees around Venus.

This is the closest Venus I’ve ever imaged (apart from 2012 transit, but even during that time I didn’t follow its path few days before the transit). A personal record for me.

And a beautiful photo of Venus, Ahmad. Thank you for sharing!