For the first time, astronomers have detected the vaporized remains of the crusts of long-dead Earth-like and Mars-like planets in the atmospheres of white dwarf stars. 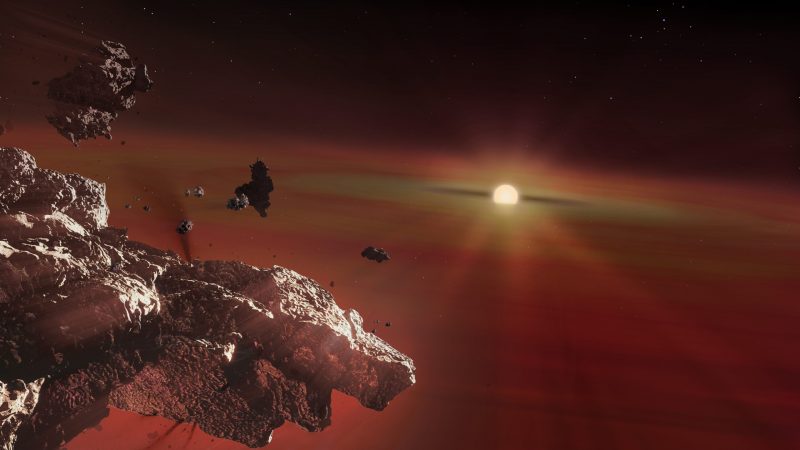 Artist’s concept of planetary crust fragments being vaporized around a white dwarf star. Image via University of Warwick/ Mark Garlick.

Finding other Earth-like planets in our Milky Way galaxy has been a holy grail of exoplanet research. Astronomers have found Earth-sized exoplanets. But is an Earth-sized planet going to be Earth-like? We still don’t know. Now, though, scientists at the University of Warwick in the U.K. have announced another clue that some exoplanets can, and do, have Earth-like compositions. The results come not from the planets themselves, but rather the vaporized remains of their crusts in the atmospheres of white dwarf stars.

White dwarfs are the burnt-out cores of once-active stars like our sun. It seems likely that – at one time – some may have had their own solar systems. So far, astronomers have detected the dusty remains of planetary crusts in the atmospheres of four white dwarfs.

The researchers reported these fascinating peer-reviewed results in Nature Astronomy on February 11, 2021.

According to analysis of the vaporized material found, these are the remains of the outer layers, the crusts, of planets similar in rocky composition to Earth and Mars that used to orbit those stars. The chemical composition of these crusts was very similar to Earth’s continental crust. The planets would have been vaporized when the former stars – ones like our sun that are not massive enough to become neutron stars – turned into red giant stars before finally shrinking down to a leftover core, or white dwarf. The term Earth-like is used here in the sense that the rocky composition of these worlds was similar to ours, although that doesn’t tell us what the actual conditions were like on their surfaces. including temperature, atmosphere, etc. 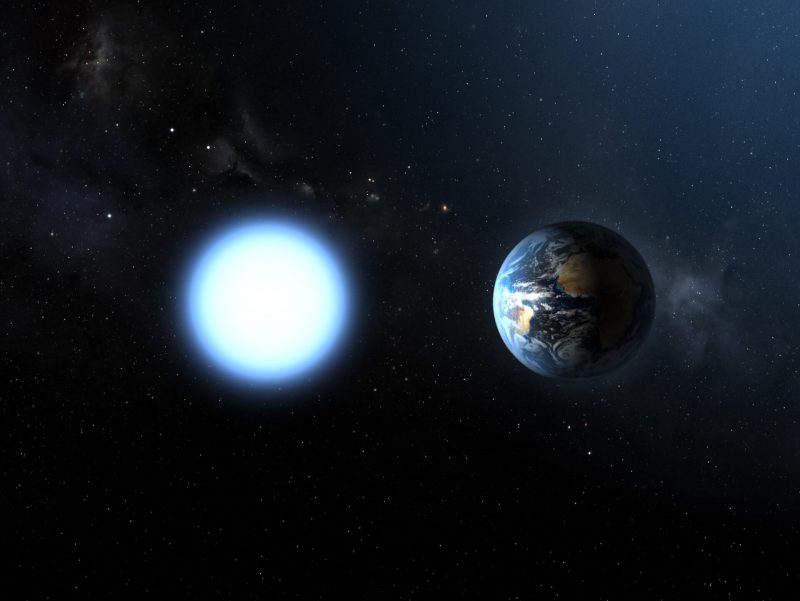 Size comparison of the white dwarf Sirius B to Earth. White dwarfs are the remaining burnt-out cores of formerly active stars like our sun. Image via ESA/ NASA.

The discovery was made using data about more than 1,000 nearby white dwarf stars from the European Space Agency’s Gaia telescope. One star in particular stood out when they analyzed the data using spectroscopy. This way, the researchers could determine what elements are present in the atmospheres of the white dwarfs. The white dwarf of special interest turned out to have lithium in its atmosphere. It was then found in three more white dwarfs as well, and one of those also had potassium.

Why is this significant? The researchers compared the ratios of those two elements with two others that were also found: sodium and calcium. Surprisingly, the ratios match those found in the rocky crusts of Earth and Mars. The scientists estimated that they had been present in the stars’ atmospheres for about 2 million years, after the crusts of the former planets had been vaporized. As lead author Mark Hollands noted in a statement:

In the past, we’ve seen all sorts of things like mantle and core material, but we’ve not had a definitive detection of planetary crust. Lithium and potassium are good indicators of crust material, they are not present in high concentrations in the mantle or core.

Now we know what chemical signature to look for to detect these elements, we have the opportunity to look at a huge number of white dwarfs and find more of these. Then we can look at the distribution of that signature and see how often we detect these planetary crusts and how that compares to our predictions.

The researchers think that the vaporized elements came from rocky pieces that broke off from planets rather than from entire planets. There is a lot of this material, about 300,000 gigatons in each star (one gigaton is equal to one billion tons), which includes up to 60 gigatons of lithium and 3,000 gigatons of potassium, equivalent to a 37 mile (60 km) sphere of similar density to Earth’s crust. 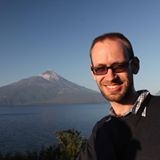 The discovery of this crust material is exciting since it provides valuable clues as to what the former planets were composed of, but is more difficult to detect than material from the inner core or mantle, which has been seen before in white dwarfs.

These white dwarfs are also very old, burning up their fuel about 10 billion years ago. That also means that the former planetary systems were some of the oldest known in the galaxy. If any of these planets, older than any in our solar system, actually were Earth-like to some degree (apart from just composition), then any possible life would have had an even longer time to evolve before their stars bloated into red giants and consumed them. Co-author Pier-Emmanuel Tremblay said:

In one case, we are looking at planet formation around a star that was formed in the galactic halo, 11-12.5 billion years ago, hence it must be one of the oldest planetary systems known so far. Another of these systems formed around a short-lived star that was initially more than four times the mass of the sun, a record-breaking discovery delivering important constraints on how fast planets can form around their host stars.

Interestingly, one of the white dwarfs is about 70% more massive than average. The researchers think that there must be more crustal material in a surrounding debris disk that is replenishing the amount in the white dwarf’s atmosphere. Otherwise, the material should have disappeared already. An excessive amount of infrared light was also detected, evidence for a debris disk being heated by the star and the re-radiated at longer wavelengths. 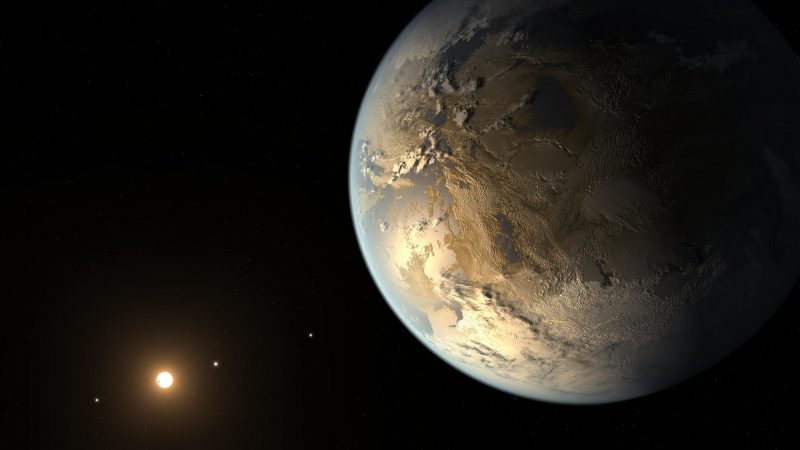 Artist’s concept of Kepler-186f, the first Earth-sized rocky planet found in the habitable zone of its star. The discovery of the vaporized remains of crusts in white dwarfs that are similar in composition to Earth and Mars further suggests that such worlds are common in our galaxy. Image via NASA/ SETI Institute/ JPL-Caltech.

As we understand it, rocky planet formation happens in a similar way in different planetary systems. Initially, they are formed from similar material in composition to the star, but over time those materials separate and you end up with different chemical compositions in different parts of the planets. We can see that at some point that these objects have undergone differentiation, where the composition is different to the starting composition of the star.

It is now well understood that most normal stars like the sun harbor planets, but now there’s the opportunity to look at the frequency of different types of material as well.

We already know from detections of exoplanets by telescopes that there are many rocky worlds in our galaxy similar in size to Earth, and some a bit larger, known as super-Earths. Some smaller Mars-sized planets are even being found now. The discovery and study of crustal remains of similar but now long-gone worlds around white dwarfs show that at least some of those planets have compositions very similar to Earth. When it comes to the search for evidence of life elsewhere, that is an exciting and tantalizing finding indeed.

Bottom line: Astronomers have detected the vaporized remains of former planetary crusts in the atmospheres of white dwarf stars for the first time.