A galaxy about 43 million light years from Earth with an actively growing black hole at its center. 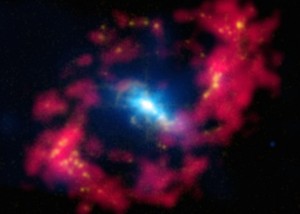 This composite image features the central region of the
spiral galaxy NGC 4151. In the pupil of the “eye,” X-rays (blue) from
Chandra are combined with optical data (yellow) showing positively
charged hydrogen. The red around the pupil reveals neutral hydrogen
detected by radio observations. A study has shown that the X-ray
emission was likely caused by an outburst powered by the supermassive
black hole located in the white region in the center of the galaxy.
Evidence for this idea comes from the elongation of the X-rays running
from the top left to the bottom right and details of the X-ray spectrum.

Thank you! Your submission has been received!
Oops! Something went wrong while submitting the form.
END_OF_DOCUMENT_TOKEN_TO_BE_REPLACED