“Eye of Sauron” is a nickname for an active supermassive black hole at the core of a distant galaxy. Researchers measured its distance at 62 million light-years. 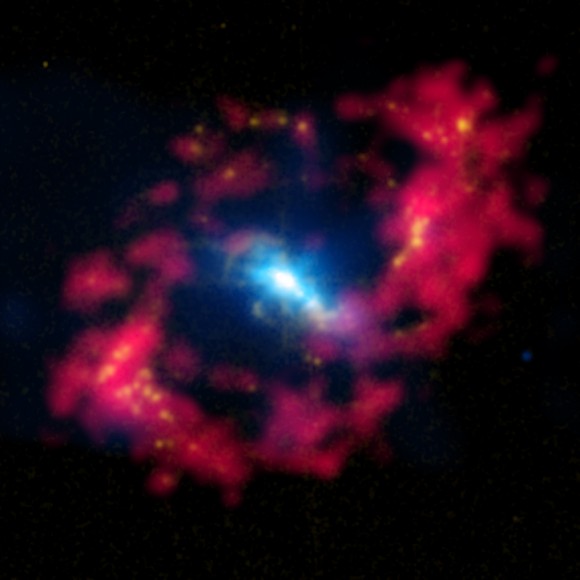 “Eye of Sauron,” an actively growing supermassive black hole at the center of the galaxy called NGC 4151. Read more about this image

How do we know the distances across space? Astronomers start with an actual measurement of nearby stars via stellar parallax and use a stepping stone method to estimate the vast distances beyond the closest stars. It’s impressive, but the method is full of guesstimates, and thus cosmic distances are known to be uncertain. Now researchers from the Niels Bohr Institute at the University of Copenhagen say they’ve demonstrated that precise distances can be measured using supermassive black holes. The scientific journal Nature published their results, which they announced today (November 26, 2014).

To probe the usefulness of this method, the researchers used the central region of an active galaxy called NGC 4151. Its central region is the famous Eye of Sauron – not the one from Lord of the Rings, but a realm of space surely as formidable: a supermassive black hole at the center of NGC 4151, which we – at our great distance across space – see as still active. IN other words, unlike the dormant supermassive black hole at the center of our own Milky Way galaxy, the supermassive black hole in NGC 4151 still accretes – or accumulate – matter via gas clouds surrounding it. The researchers say it’s this process of accretion that makes it possible to measure the distance to the galaxy.

Darach Watson of the Dark Cosmology Center at the Niels Bohr Institute and study leader Sebastian Hönig, who now works at the University of Southampton in the U.K., worked together to obtain these results. Watson explained:

… a hundred times better resolution than the Hubble Space Telescope — and allows them to measure the angle the dust ring makes in the sky, (about twelve millionth of a degree).

Then the researchers combined data about the angular size of the dust ring on the sky’s dome with the physical size of 30 light-days, to find the distance to the supermassive black hole in NGC 4151. Watson said:

We calculated the distance to be 62 million light-years. The previous calculations based on redshift (a change in the wavelength of the light due to the velocity of the object away from us) were between 13 million and 95 million light-years, so we have gone from a great deal of uncertainty to now being able to determine the precise distance. This is very significant for astronomical calculations of cosmic scale distances. 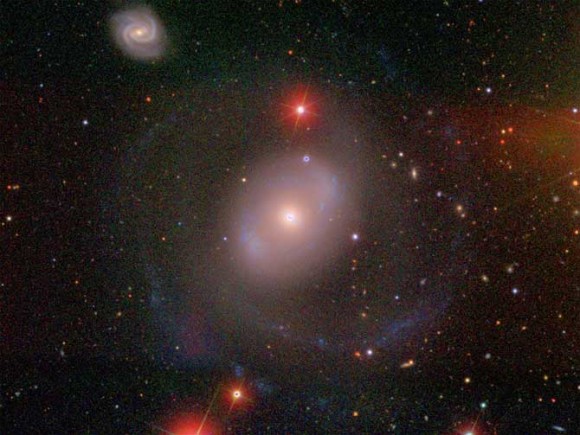 Here is the entire galaxy NGC 4151. It’s located in the direction to what we see as the constellation Canes Venatici. Image via David W. Hogg, Michael R. Blanton, and the Sloan Digital Sky Survey Collaboration.

Watson said he and Sebastian Hönig were both

… thrilled with the results.

The process was almost magical. The most important thing about measuring distance is high precision — how accurate is the method. We knew that if we could get the uncertainty down to about 10 percent, it would be significant, but we had no idea that it was possible. When we first realized that we could carry out this measurement, we knew that the precision of the measurements of the angular size using interferometry and the physical size based on the time delay were both only about 30 percent. Normally, when you combine two such numbers, the accuracy of the ratio is worse, so we expected an overall accuracy of 40 percent or so. But that was not what happened. It turned out that the greatest uncertainty in both measurements was the distribution of the brightness across the dust ring. And it was the same in both measurements, so when we took the ratio, the uncertainties cancelled — simply disappeared. Sebastian Hönig, after making the first calculation, came to me and said: ‘You’ll never believe what the precision is, guess!’ Usually in science you fight so hard to get something to fit or work properly. But every so often — very rarely, something magical happens — it’s like a gift and everything just falls into place. That is what happened here. 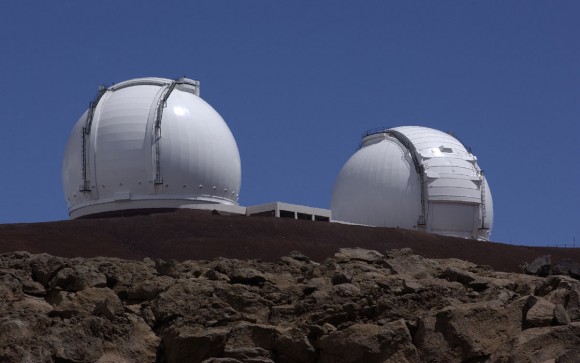 The two Keck 10-meter (33 feet) telescopes. The black hole researchers used these two telescopes in a way that made them act equivalently to one telescope with a perfect 85-meter diameter mirror. Image via NASA/JPL