Comet Lovejoy has been visible with binoculars in the predawn sky, near the famous Beehive star cluster. How to spot it, plus best photos, here. 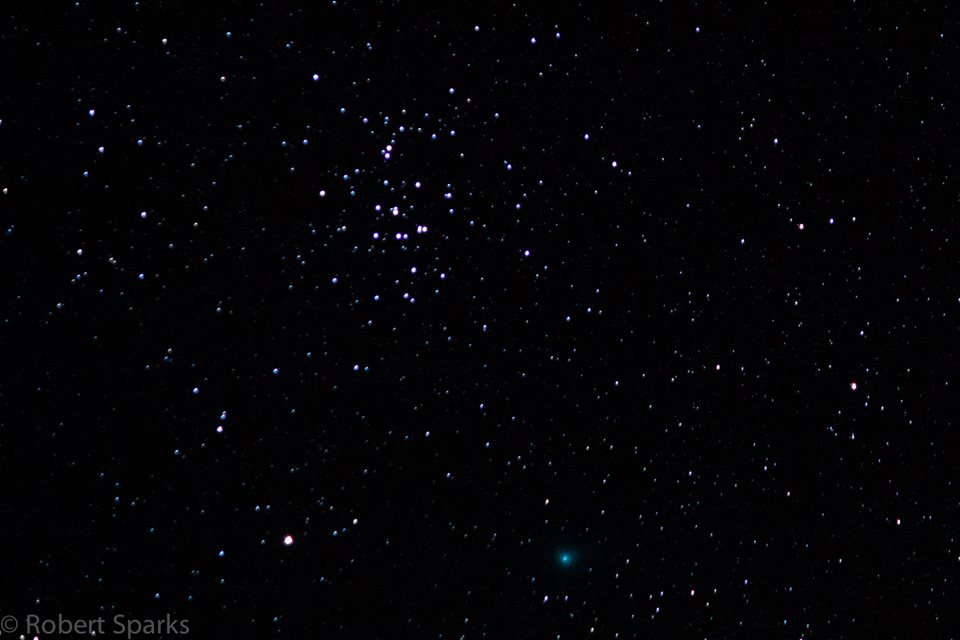 View larger. | Robert Sparks captured this photo of Comet Lovejoy [bottom, right of center, bluish color] and the Beehive cluster cluster on November 6, 2013. He wrote, “Canon 60D and EF-s 55-250mm zoom lens; 163mm and f/5 on the iOptron SkyTracker. Lovejoy is easily visible (much brighter than ISON) and looks lovely in my 8×42 binoculars.” 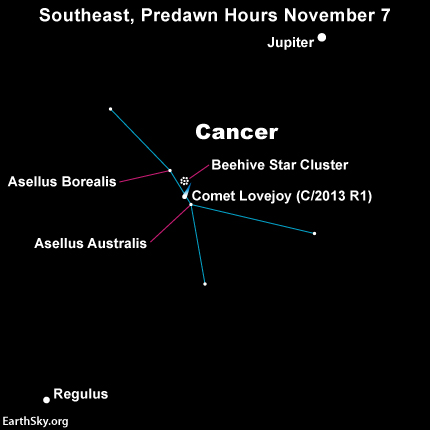 Find Comet Lovejoy near the Beehive cluster sometime between midnight and dawn on and near November 7. The Beehive is between the very bright planet Jupiter – brightest starlike object up before dawn – and the star Regulus. Jupiter reaches its highest point for the night in the southern sky around 4:30 a.m. local time.

Comet Lovejoy probably isn’t bright enough to see with the eye, but you can pick it up this week with binoculars. Animation of Comet Lovejoy via Ian Musgrave in Adelaide, Australia. 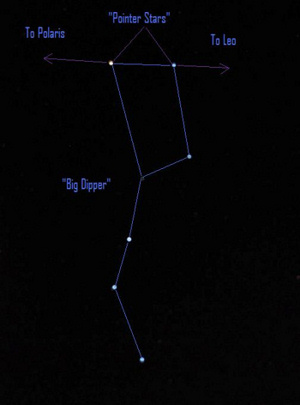 Not sure which star is Regulus? Regulus is the brightest star in Leo. Use the Pointer Stars in the Bowl of the Big Dipper to find Leo and Regulus. 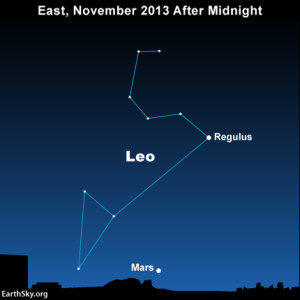 Although Comet Lovejoy (C/2013 R1) was discovered only recently – in September 2013 – it is now the brightest comet in the November 2013 morning sky. Surprisingly, it’s even brighter than Comet ISON (C/2012 S1), which has been the most talked-about comet since its discovery in late 2012. This week, many have been catching Comet Lovejoy with a small telescope or ordinary binoculars. I saw it myself through my 10×50 binoculars around 3:30 a.m. Tuesday morning (November 5). For a few days centered on November 7, this comet is near the beautiful Beehive star cluster in the constellation Cancer the Crab. Check out some of the photos of the comet and the Beehive on this page!

Comet Lovejoy (C/2013 R1) is expected to brighten this month. You might even be able to see it with the naked eye in a week or two. Catch it this week, and watch it brighten.

When to look for Comet Lovejoy. If you’re a night owl or an early bird, up and about between midnight and dawn, you’re in luck. The ideal time to look is during the dark hours before dawn, when Comet Lovejoy shines fairly high in a dark nighttime sky.

Where in the sky to look. Practiced stargazers use the technique of star hopping to find the comet, and you can, too. It’s as easy as one-two-three.

1. First, locate the planet Jupiter, the brightest starlike object in the morning sky. Jupiter will be high overhead before dawn, and somewhat toward the western sky, at dawn. It’ll be hard to miss dazzling Jupiter because it’s so bright!

2. Then locate the star Regulus, the brightest light in the constellation Leo the Lion. Regulus is more of a challenge than Jupiter, but Regulus helps you to find the Beehive and hence the comet. Are you familiar with the Big Dipper asterism? The Big Dipper stands more or less upright in the northeastern November predawn sky. Once you find it, use the pointer stars (Dubhe and Merak) in the Bowl of the Big Dipper to star-hop to the constellation Leo and the star Regulus. Regulus is the brightest star in Leo, and it marks the bottom tip of a famous backwards-question-mark pattern in Leo.

This all sounds a bit complicated, if you don’t know these sky signposts. But if you have binoculars, and you can find Jupiter and Regulus, just scan with your binoculars between them for the Beehive. Then look closer. The comet will be that small fuzzy object in the field of view. Need another chart? Click here for a Comet Lovejoy chart courtesy of Comet Chasing. 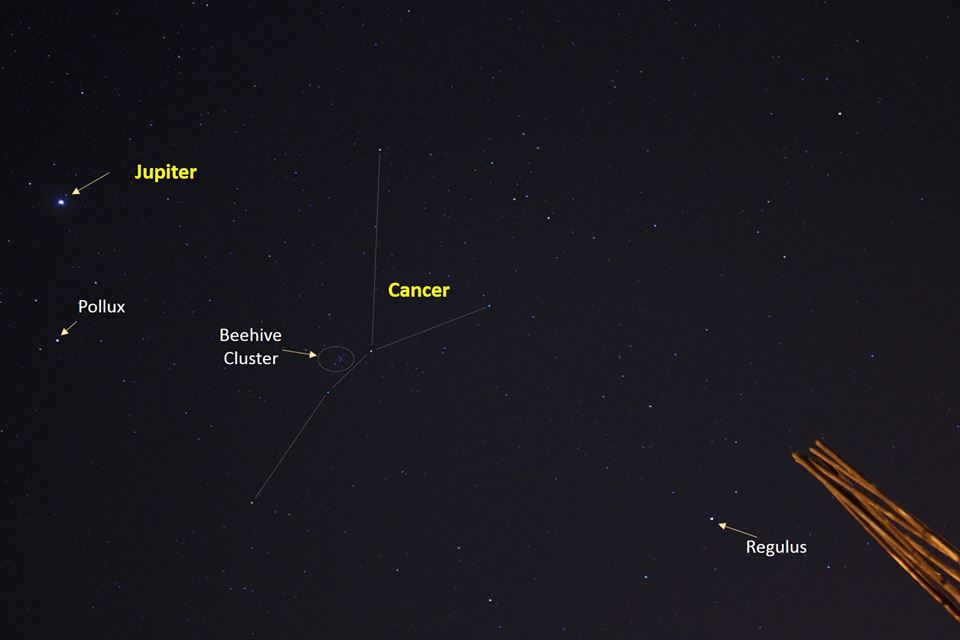 View larger. | EarthSky Facebook friend Billoy Baluso in the Philippines kindly provided this photo of the part of the night sky containing the objects mentioned in this post: bright planet Jupiter, star Regulus and Beehive star cluster. Comet Lovejoy isn’t labeled, but it’s near the Beehive. Thank you, Biloy! 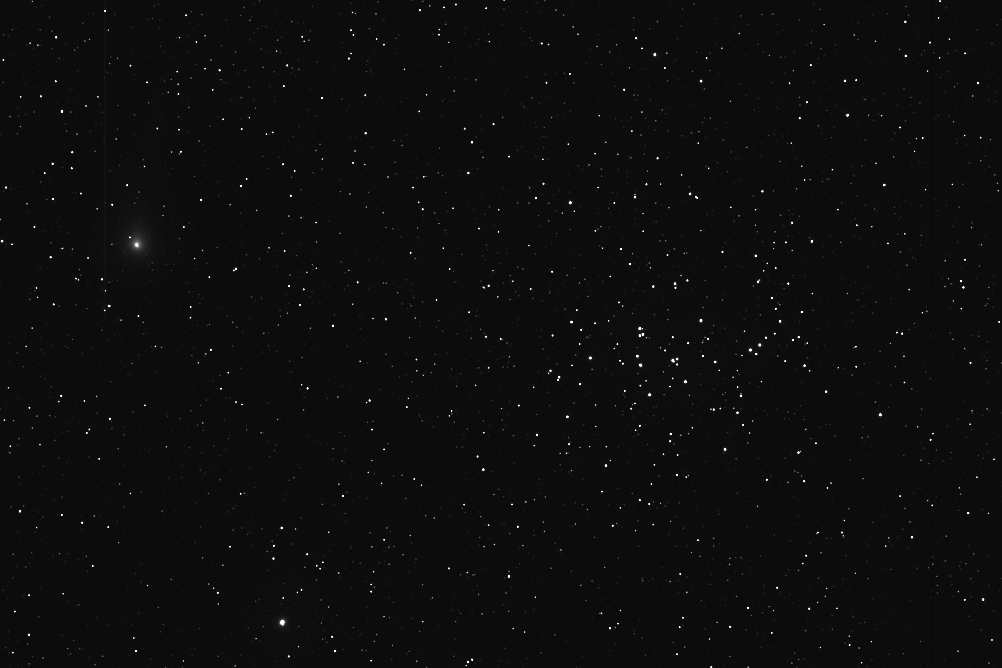 View larger. | Comet Lovejoy as captured by Ian Musgrave in Australia on November 6, 2013. 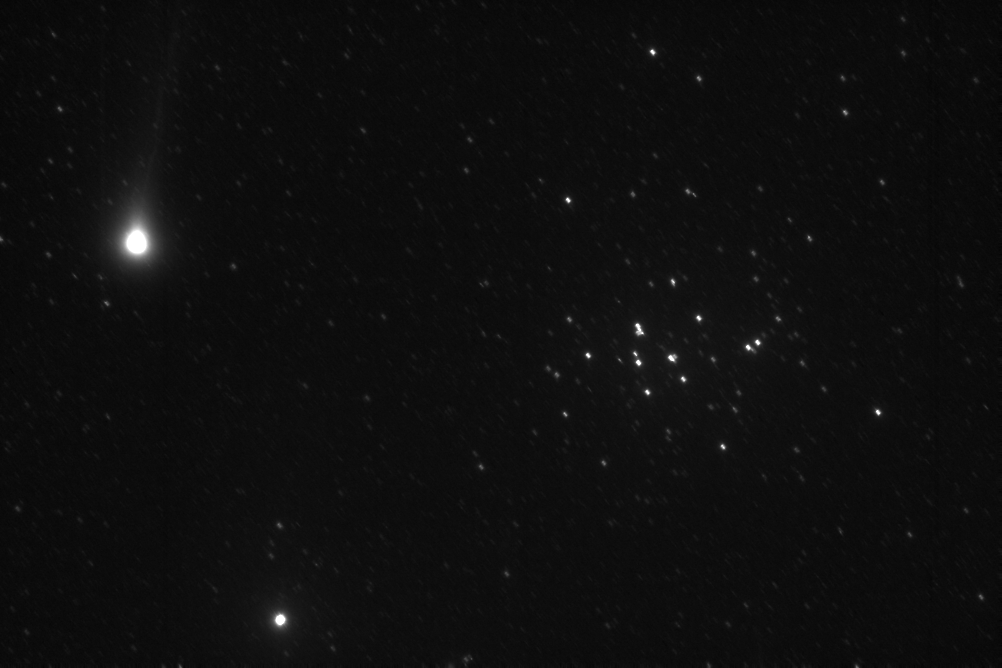 View larger. | Ian Musgrave also sent this stacked photo and said, “Median stack of 10×60 sec images, brings out the tail of Lovejoy while keeping some of the details of the cluster.” 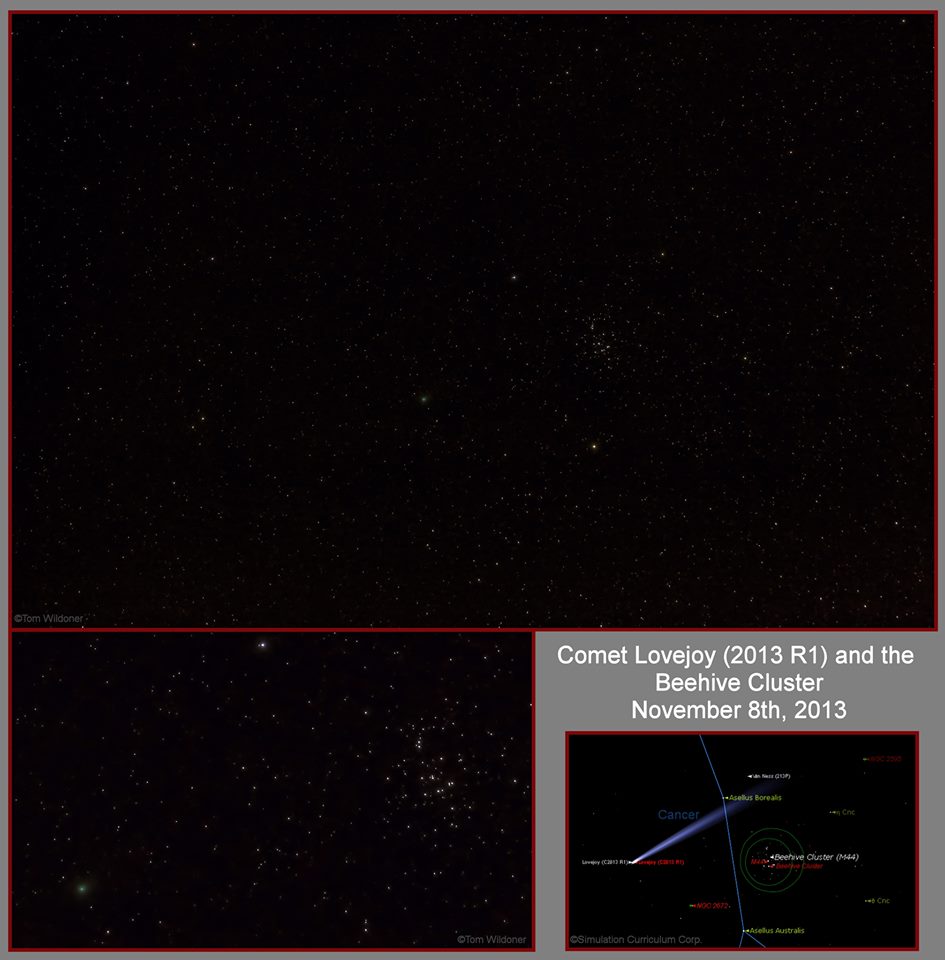 View larger. | Tom Wildoner captured this image of Comet Lovejoy and the Beehive on November 8, 2013. 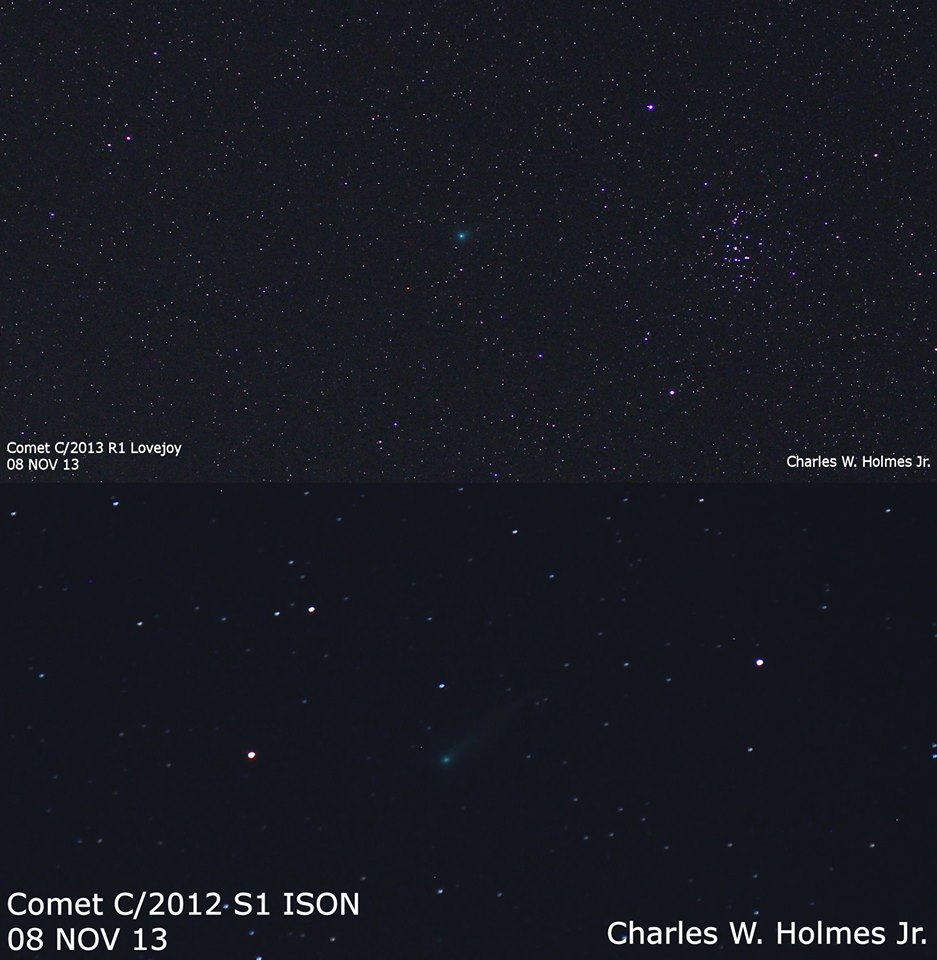 View larger. | Here are two comets – Lovejoy and ISON – as captured by EarthSky Facebook friend Charles W. Holmes on the morning of November 8, 2013. Thank you, Charles!

Bottom line: Comet Lovejoy (C/2013 R1) might turn out to be a fun comet for all of us. Catch it this week near the Beehive star cluster, or at least enjoy the photos in this post. The comet is near the Beehive for a few days centered on November 7, 2013. Best time to look: before dawn. By all reports, it’s pretty easy to catch in decent-sized binoculars.