The rings of the 7th planet, Uranus, are thin and dark. But new thermal images from the ALMA and VLT telescopes show them glowing brightly. 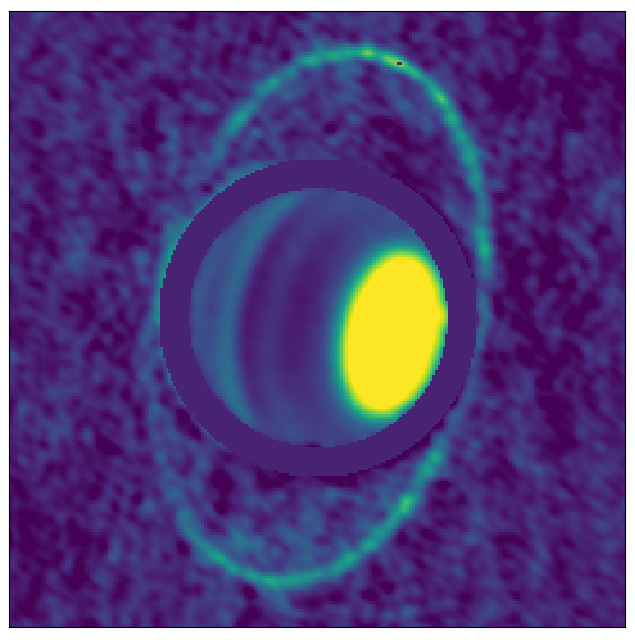 Here’s a composite thermal image, showing both Uranus’ atmosphere and rings. These observations marked the first measurement of the “heat” of the rings, which are actually extremely cold. Image via UC Berkeley/Edward Molter/Imke de Pater.

Saturn is, of course, famous for its majestic rings, but Jupiter, Uranus and Neptune all have ring systems as well. Those ring systems are all much less massive and fainter than Saturn’s, and you need a very powerful telescope or a spacecraft to see them well. But now astronomers have taken some new earth-based thermal images of Uranus’ rings, where they look surprisingly bright. For the first time, researchers were also able to measure the temperature of the rings: a very chilly 320 degrees below zero Fahrenheit (-195 Celsius).

The peer-reviewed results were published this week in The Astronomical Journal by Imke de Pater at UC Berkeley and Michael Roman and Leigh Fletcher from the University of Leicester in the United Kingdom.

Uranus’ ring system as seen in 2019 by the ALMA and VLT telescopes. The planet itself is masked off as it is much brighter than the rings. Uranus’ rings are normally so faint that they can’t be seen through telescopes. They were only discovered in 1977, when astronomers saw them passing in front of a star, blocking its light. Image via Edward Molter/Imke de Pater/Michael Roman/Leigh Fletcher, 2019.

Two different telescopes – the Atacama Large Millimeter/submillimeter Array (ALMA) and the Very Large Telescope (VLT), both in northern Chile – captured the new images. They found that Uranus’ brightest and densest ring – the epsilon ring – is unlike any other known ring in the solar system. The data show how it differs from Saturn’s rings in composition, with only larger particles, according to de Pater:

Saturn’s mainly icy rings are broad, bright and have a range of particle sizes, from micron-sized dust in the innermost D ring, to tens of meters in size in the main rings. The small end is missing in the main rings of Uranus; the brightest ring, epsilon, is composed of golf ball-sized and larger rocks. 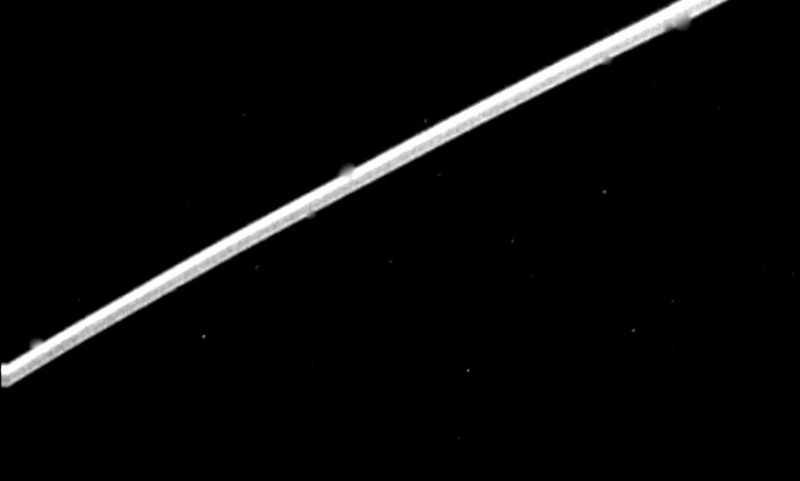 Voyager 2 acquired this high-resolution image of the epsilon ring of Uranus on January 23, 1986, from a distance of 1.12 million kilometers (690,000 miles). Image via NASA JPL. Read more about the epsilon ring.

Uranus’ rings are also markedly different from Jupiter’s or Neptune’s rings. The particles in Jupiter’s rings are very small, micron-sized dust, only a thousandth of a millimeter in size, while Neptune’s rings are mostly dust-sized particles. But Uranus does also have broad sheets of dust, in between the main rings composed of the larger particles. As noted by graduate student Edward Molter:

We already know that the epsilon ring is a bit weird, because we don’t see the smaller stuff. Something has been sweeping the smaller stuff out, or it’s all glomming together. We just don’t know. This is a step toward understanding their composition and whether all of the rings came from the same source material, or are different for each ring. 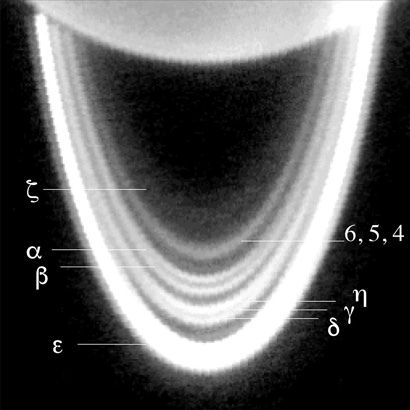 This near-infrared image of Uranus’ rings was taken by the Keck telescope in Hawaii in July 2004. Unlike the other images on this page – which are heat images, showing heat radiating – this one shows sunlight reflected off the rings. Image via UC Berkeley/Imke de Pater/Seran Gibbard/Heidi Hammel, 2006.

How else are Uranus’ rings unique? They are very dark and narrow, as Molter explained:

The rings of Uranus are compositionally different from Saturn’s main ring, in the sense that in optical and infrared, the albedo is much lower: they are really dark, like charcoal. They are also extremely narrow compared to the rings of Saturn. The widest, the epsilon ring, varies from 20 to 100 kilometers wide [12 to 125 miles], whereas Saturn’s are hundreds or tens of thousands of kilometers wide.

He added that he was surprised when his equipment showed Uranus’ rings. The rings, after all, weren’t known until 1977, and then astronomers didn’t actually see them from Earth; they only deduced their presence when the rings passed in front of a star, blocking its light. Molter commented:

It’s cool that we can even do this with the instruments we have [now]. I was just trying to image the planet as best I could and I saw the rings. It was amazing.

All in all, the new observation results from ALMA and VLT were surprising to the scientists; they were not expecting the rings to look as bright as they did. They were actually using the telescopes to measure the temperature of Uranus’ atmosphere instead, and the bright rings were a bonus. As Fletcher noted:

We were astonished to see the rings jump out clearly when we reduced the data for the first time. 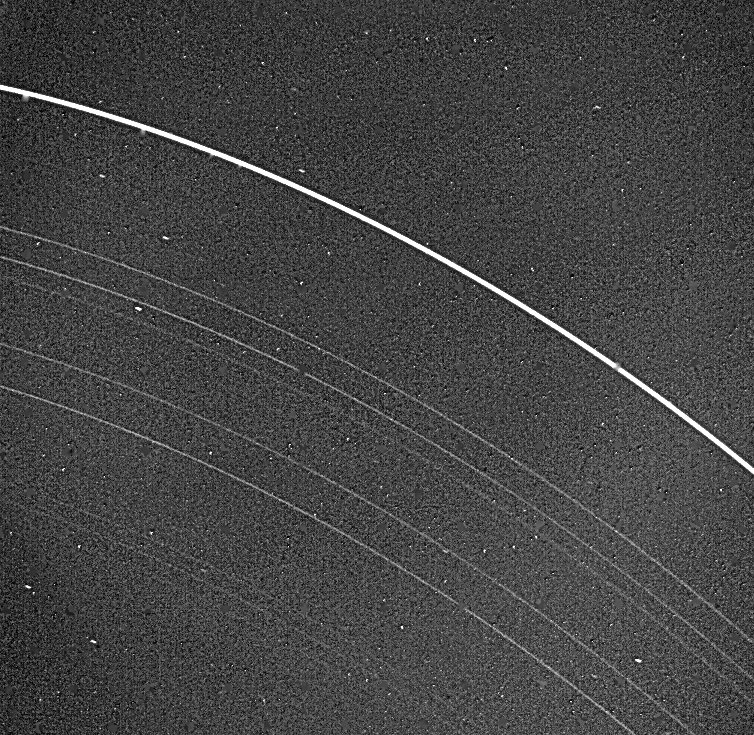 Another view of the rings from Voyager 2. Image via NASA/Wikipedia.

Uranus has 13 known rings, along with the bands of smaller dust-sized particles between them. Just why the rings themselves only have larger particles isn’t known yet, but it’s interesting to see the variation of rings among different planets. NASA’s Voyager 2 spacecraft first photographed Uranus’ rings up close in 1986 and also found that the main rings had little to no smaller particles in them. Unfortunately, it wasn’t equipped to measure their temperature, however.

Until another mission is eventually sent to Uranus, scientists will have to mostly rely on observations from Earth to further study the ice giant and its rings and moons. But before that, the upcoming James Webb Space Telescope (JWST) will be able to take a more detailed look at the rings, including spectroscopic analysis. They may not be as spectacular as Saturn’s, but they do glow brighter than ever before in these latest images.

Bottom line: New thermal images of Uranus’ rings from the ALMA and VLT telescopes show them glowing more brightly than ever seen before.