Update on Dawn mission to Ceres

The Dawn spacecraft is still orbiting Ceres. It went into an extended mission mode on July 1. Some mission highlights and current thinking, here.

NASA’s Dawn spacecraft completed its primary mission at dwarf planet Ceres on June 30, 2016, just in time for the global celebration known as Asteroid Day. Since July 1, Dawn has been in an extended mission. In fact, all mission objectives were met by the end of March 2016, and continuing observations allowed for full imaging of the protoplanet at 115-foot (35-meter) resolution. The original plan was for 650-foot (200-meter) resolution global imaging with selected targets only at 35 meters. So now we have a data set of both 4 Vesta (which Dawn orbited from July 2011 to September 2012) and 1 Ceres (which Dawn has been orbiting since March 2015) that where not thought even feasible at launch at Dawn’s September 2007 launch. All in all, the Dawn mission has been an enormous success, bringing into fantastic detail the largest and third-largest members of the asteroid belt.

Thus Dawn has been in space for nine years. It was launched with four gyroscopes – three working and one backup – to enable it to maintain a stable orientation. Now Dawn has only two working gyroscopes, as No. 1 and the backup No. 4 have both failed.

Back in June when the original mission was coming up to its original end date, engineering data showed that the Dawn spacecraft was still fully operational, with the solar arrays having degraded a little, but still producing ample power and still enough hydrazine left for at least another year of operation. 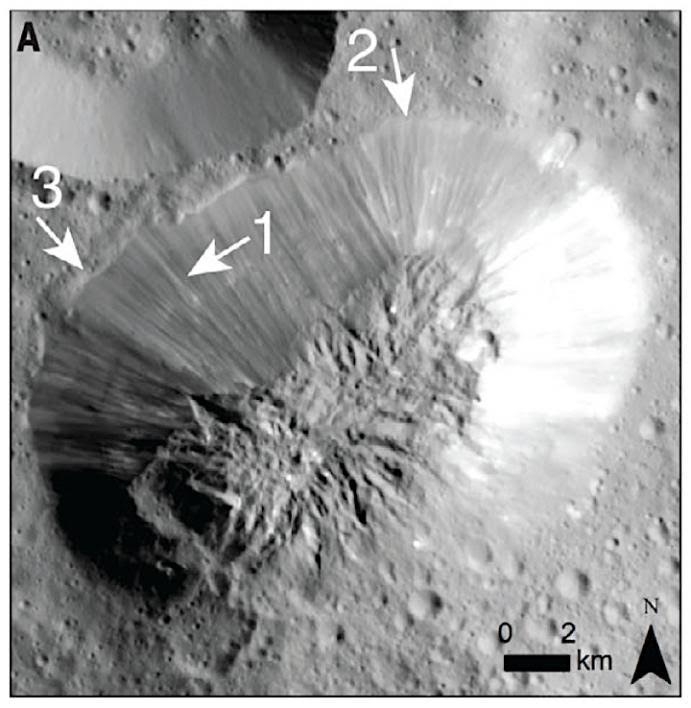 Ahuna Mons on Ceres, as from overhead by Dawn spacecraft.

This led to some interesting ideas. The main one initially was for the Dawn spacecraft to start spiralling away from Ceres in July 2016. It might have gone back into solar orbit and made a nearly three-year trip (hydrazine usage for the cruise would have been almost non-existent) for a very close, slow encounter with the large (99-mile-wide or 160-km-wide) main belt asteroid 145 Adeona in May 2019.

However, the science committee in NASA decided instead to keep the Dawn spacecraft in orbit around Ceres. Since September 2, 2016, Dawn has been climbing back up to a second phase of its High Altitude Mapping Orbit (HAMO) to an orbital altitude of 915 miles (1,472 km), but this time will be passing over the 1 p.m. to 1 a.m. line on Ceres, whereas in the original HAMO orbit the orbital track was close to the terminator at roughly the 6 a.m. – 6 p.m. line. This new orientation of the orbiter will enable viewing of features under a higher sun, and thus warmer terrain. As Ceres reaches perihelion (closest point to the sun) in April 2018, Dawn may spy activity.

It has also been determined that the curious mountain on Ceres – Ahuna Mons – is indeed a cryovolcano, made from frozen muddy, salty ice. This mountain is 16,400 feet 5,000 meters) tall from its base on Ceres’ lowlands. It lies antipodal (on the opposite side of the globe) to the large Kerwan Crater (170 miles or 280 kilometers wide). This positioning now appears to be related. The impact that created the Kerwan Crater sent massive seismic waves through Ceres and they converged exactly opposite to the point of impact. The seismic waves shattered the crust here and temporarily compressed the subsurface, ice rich crust, warming it, causing eruptions, creating this huge mountain. 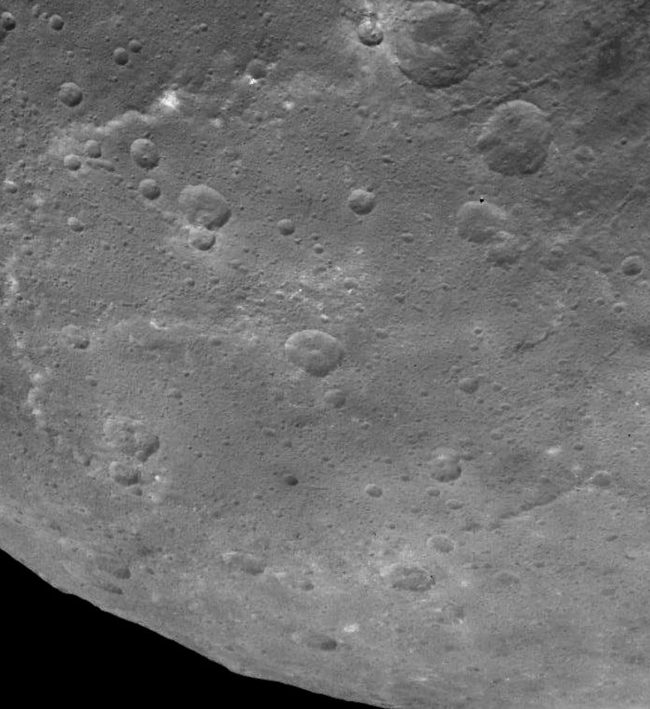 Ceres is approximately 599 miles wide (964 km) through its equator and 554 miles (891 km) through its poles, a difference of 7.5%. It orbits the sun in the asteroid belt between the planets Mars and Jupiter, completing a single orbit once every 4 years, 7 months and 6 days.

Ceres rotates once every 9 hours 4 minutes in a prograde (west to east) direction.

The density of Ceres suggests it is 70% rock and 30% ice in composition, very similar to Eris and Pluto.

There have been suggestions that Ceres did indeed originate in the realm of the outer solar system where Eris and Pluto reside – the Kuiper Belt – then was ejected inwards and was sent into an orbit within the asteroid belt by Jupiter. But Ceres may also have formed close to its current orbit. In the early solar system, the infant sun was approximately 30% dimmer than now, so that region was much colder than now. Jupiter probably prevented Ceres from forming into a fully fledged planet.

A recent discovery made by the Hubble Space Telescope suggests minor plume activity when Ceres is at perihelion, closest point to the sun, with plume activity lining up with two large impact craters, showing that two relatively recent impacts have exposed ice rich materials.

Simulated perspective view from the south of the strange, lonely mountain known as Ahuna Mons on Ceres (no vertical exaggeration). Image via Science.

Bottom line: The Dawn spacecraft has been orbiting the dwarf planet Ceres – largest body in the asteroid belt between Mars and Jupiter – since March 2015. The spacecraft went into an extended mission phase on July 1, 2016. It has been spectacularly successful. Some mission highlights and current thinking, here.