Here’s a very cool movie from NASA’s Solar and Heliospheric Observatory (SOHO) of an unusual comet skimming past the sun between February 18 and 21, 2015. See it? The comet is a little dot sailing along, most visible after it rounds the sun about halfway through the movie, and afterwards headed toward the left side of the frame. The comet is called C/2015 D1 (SOHO). As an extra added attraction in this movie, toward the end of the video – as the comet begins to develop a tail – the sun releases a coronal mass ejection, or CME. Blam-o!

And guess what? We might get to see this comet in our evening sky. Maybe. More about that below.

Comet C/2015 D1 (SOHO) is interesting for two reasons. First it’s what’s called a non-group comet, meaning it’s not part of any known family of comets. Most comets seen by SOHO belong to the Kreutz family – all of which are thought to have broken off from a single giant comet many centuries ago. 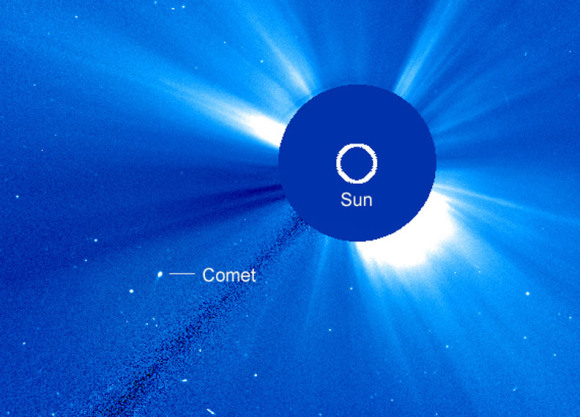 The second reason C/2015 D1 is interesting is that the vast majority of comets that come close enough to the sun to be seen by SOHO do not survive the trip. Known as sungrazers, these comets usually evaporate in the intense sunlight. This comet made it to within 2.2 million miles of the sun’s surface. At least for now, it appears to have survived the sun’s heat and gravitational tides and is turning around to the east … headed for our evening sky.

Will the comet survive the trip and show up in your evening sky? No one say for sure.

Karl Battams is a solar scientist at the Naval Research Lab in Washington, D.C. He said:

There’s a half-decent chance that ground observers might be able to detect it in the coming weeks. But it’s also possible that events during its trip around the sun will cause it to die fairly fast.

Astronomers calculated the comet’s changing position in the SOHO images and the Minor Planet Center used the data to publish an orbit, which Bob King of Universe Today and AstroBob then used to chart the comet’s path across our sky: 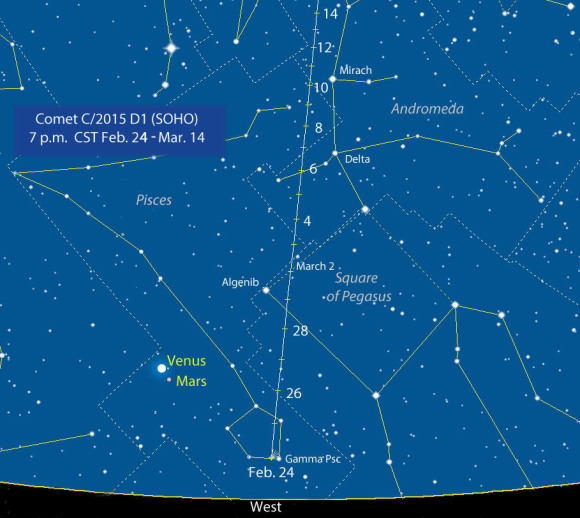 If it shows up at all, newly-named Comet C/2015 D1 (SOHO) will share the sky with Venus and Mars at dusk. At first, it will be quite low and nearly impossible to see. Its situation improves over time as the comet moves rapidly northward into Pegasus and Andromeda. Tick marks show the comet’s position each evening. Stars are shown to magnitude +6.5. Via Bob King at Universe Today

Based on this preliminary orbit, I’ve plotted SOHO-2875’s path for the next couple weeks as it tracks up through Pisces and Pegasus during the early evening hours. Given that it’s probably no brighter than magnitude +6 [ed. note: limit of viewing with the unaided eye] at the moment and very low in the west at dusk, it may still be swamped in twilight’s glow.

What’s not known yet is whether the comet will go the way of the erstwhile Comet ISON. Remember Comet ISON? Comet-of-the-century Comet ISON? It was so much fun to watch it round the sun around Thanksgiving Day, 2013. That was a very similar situation to this one, with a sungrazing comet rounding the sun and due to enter our skies. But – sigh – Comet ISON disintegrated after coming closest to the sun. It became a diffuse cloud of comet dust. As Bob King said:

More about sungrazing comets this video: