Perturbations in the orbit of Uranus let astronomers discover the planet Neptune in 1846. Now this same technique has been used to find a planet 1,000 light-years away. 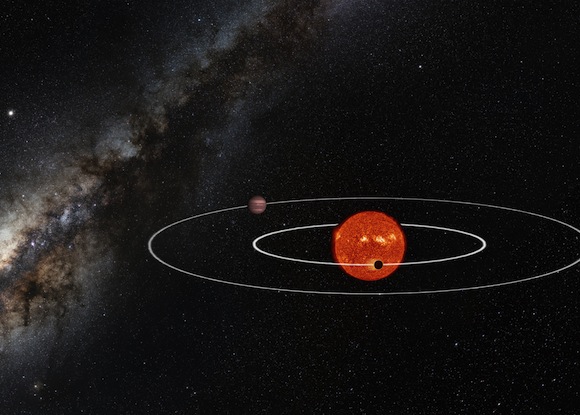 For the first time, astronomers have confirmed an unseen planet in a distant solar system thanks to the gravitational perturbation it was causing on another planet in that system. A perturbation is just a deviation in the movement of a planet, caused by the pull of gravity from an outside influence. Perturbations in the orbit of Uranus let astronomers discover the planet Neptune in 1846. Neptune is in our solar system, relatively nearby. The Kepler-88 system is over 1,000 light-years away. This is the first time astronomers have confirmed the presence of an exoplanet – planet orbiting a star besides our sun – using this technique. The newly confirmed world is now called Kepler-88 c. It was causing minor shifts in the orbit of its brother world, Kepler-88 b.

Astronomer Alexandre Santerne of the Centre for Astrophysics at the University of Porto in Portugal led the work. He and his team used the SOPHIE spectrograph at the Observatoire de Haute-Provence in France to measure the mass of Kepler-88 c, thus confirming that it exists.

Astronomers learned over a year ago that the orbit of Kepler-88 b is strongly perturbed. In other words, transits of this planet in front of the face of its star did not come exactly when expected. Rodrigo Diaz, a researcher working at the Geneva Observatory, said in a press release issued today (December 17, 2013):

This system presents such strong interactions that it has earned the nickname of the king of transit variations.

David Nesvorny of the Southwest Research Institute had previously performed a careful analysis of the dynamical interaction between the known planet and the hypothetical, unseen planet. This work helped to put tight constraints on masses of both planets, thus suggesting a location for the unseen planet. 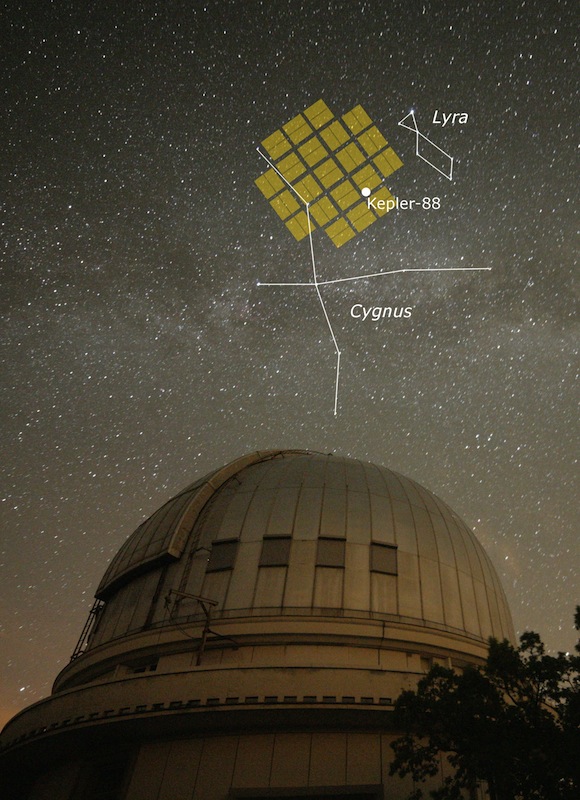 See full size | Picture of the dome of the 1.93-m telescope of Haute-Provence Observatory (France) which hosts the SOPHIE spectrograph, with the Kepler field-of-view. Credit: Alexandre Santerne (CAUP)

SOPHIE is a French instrument capable of measuring the velocity of stars with a precision equivalent to the speed of a bicycle. It has been used to characterize nearly 20 Kepler planets so far.

The inferred mass for the unseen planet is in agreement with the value that was predicted, making this the first time that the mass of an unseen exoplanet – inferred based on transit timing variations – is independently confirmed by another technique.

The work piggybacks on the amazing Kepler space observatory – launched in 2009 – which had the goal of searching for periodic transits in hundreds of thousands of stars. Kepler’s activities have been on hold since May 2013, when the telescope’s positioning system failed. But the transits it observed are what enabled the space observatory to discover thousands planets so far. According to the press release:

More than 3,500 of such periodic transits were found during the 4 years of the mission. However, not all the planets located in the Kepler field-of-view are transiting their host star. Indeed, if their orbital plane is slightly misaligned (only a few degrees is enough) with the line of sight from the Earth, the planet is not transiting and, thus, is “unseen” from the Kepler spacecraft.

Planets that share the same host star gravitationally interact with each other. This interaction between planets can cause perturbations in the predicted times of transit of planets in multi-planetary systems.

Ultimately, these perturbations in the predicted times of transit may prove to be another powerful technique for finding and confirming planets in distant solar systems.

Bottom line: In 1846, Neptune was found because it was altering the orbit of its neighboring world, Uranus. Astronomers have now used the same technique to find a planet in a distant solar system.