Unexpected storm at a galaxy’s core

At the core of a galaxy called the Teacup, jets from a central supermassive black hole may be gradually destroying the galaxy’s ability to form new stars. 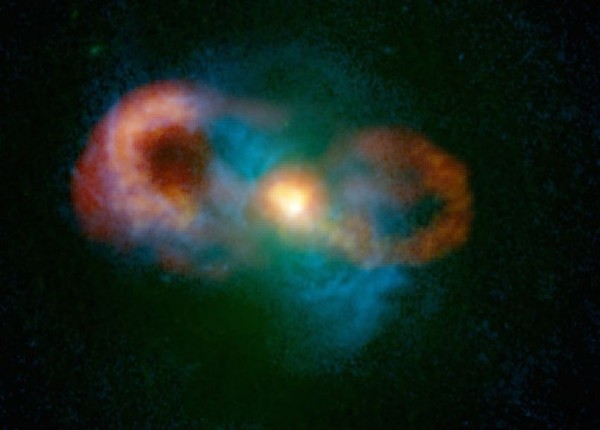 View larger. | Composite image of Teacup Galaxy. Green shows starlight, blue shows gas and the red/yellow shows radio emission. The bright yellow blobs in the center of the image show where the radio jets, launched by the galaxy’s black hole, are driving into the gas and accelerating it to 1,000 km/s (200,000 miles per hour). Image via C. Harrison, A. Thomson; Bill Saxton, NRAO/AUI/NSF; NASA.

Astronomers studying a galaxy 1.1 billion light-years from Earth have found a “storm” in the area of its central supermassive black hole, indicating it may be transforming from an actively star-forming galaxy to a type of galaxy that no longer continues to form stars. The galaxy is called J1430+1339 – also known as the Teacup. The recent observations with the Very Large Array showed that the galaxy has “bubbles” extending from 30,000 to 40,000 light-years on each side of its core, along with smaller jet-like structures, about 2,000 light-years in size. These jet-like structures are located at the position where visible-light observations indicate gas is being accelerated to speeds up to about 1,000 kilometers per second. The astronomers say their discovery provides important insight on how supermassive black holes can have a catastrophic effect on the galaxies in which they reside.

Chris Harrison, the lead-author of the study, from The Centre for Extragalactic Astronomy at Durham University in the U.K., said:

It appears that a supermassive black hole is explosively heating and blasting around the gas in this galaxy and, as a result, is transforming it from an actively star-forming galaxy into one devoid of gas that can no longer form stars.

Two major types of galaxies are spirals, rich in gas and actively forming stars, and ellipticals, gas-poor and with very little star formation. The massive ellipticals, astronomers think, started life as actively star-forming galaxies. Powerful jets and winds of material, powered by supermassive black holes at the galaxies’ centers, are believed to remove or destroy the raw material needed for continued star formation. The Teacup galaxy may be in the midst of that process. Harrison said:

For many years, we’ve seen direct evidence of this happening in galaxies that are extremely bright when viewed through radio telescopes. These, rare, radio-bright galaxies harbor powerful jets, launched at the black hole, that plow into the surrounding gas.

However, to understand how all of galaxies in our universe formed, we needed to know if these same processes occur in less extreme galaxies that better represent the majority. This was the focus of our study.

Alasdair Thomson, another Durham astronomer involved in the study, said:

These radio observations have revealed that the central black hole is whipping up a storm at the center of this galaxy, by launching powerful jets that are accelerating the gas in the host galaxy and are colliding with the gas on larger scales. This is the same kind of powerful process we’d previously seen in rare, extremely radio-luminous galaxies. The incredible capabilities of the VLA have allowed us to discover that these processes can occur in the more-common, radio-faint galaxies, as long as you look hard enough.

This storm in the Teacup means that the jet-driven process in which a black hole is removing or destroying star-forming material may be much more typical than we knew before, and could be a crucial piece in the puzzle of understanding how the galaxies we see around us were formed.

Follow-on observations with NASA’s Hubble Space Telescope also revealed evidence that the Teacup has the appearance of a elliptical-type galaxy, but is surrounded by gas that suggests it is still in the process of transforming from a star-forming galaxy. Meanwhile, Harrison and his collaborators now have observed eight more such objects with the VLA and are analyzing their data to see if the others show similar characteristics.

Bottom line: New observations of a galaxy called the Teacup – aka J1430+1339 – suggest a process at the galaxy’s core in which jets from a central supermassive black hole are gradually destroying the galaxy’s ability to form new stars.