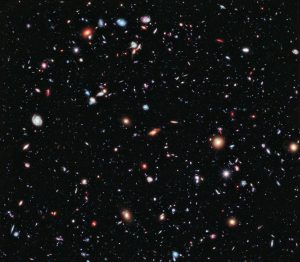 Hubble eXtreme Deep Field (XDF). With a total of over two million seconds of exposure time, it is the deepest image of the Universe ever made, combining data from previous images including the Hubble Ultra Deep Field (taken in 2002 and 2003) and Hubble Ultra Deep Field Infrared (2009). Image Credit: NASA, ESA, G. Illingworth, D. Magee, and P. Oesch (University of California, Santa Cruz), R. Bouwens (Leiden University), and the HUDF09 Team.

Thank you! Your submission has been received!
Oops! Something went wrong while submitting the form.
END_OF_DOCUMENT_TOKEN_TO_BE_REPLACED