These Ultra Luminous InfraRed Galaxies emit a trillion suns worth of infrared light, driven by bursts of star formation in colliding galaxies.

Behold the Ultra Luminous InfraRed Galaxies, or ULIRGs. As the name suggests, they are galaxies that pump out prodigious amounts of infrared light – much more than a typical galaxy.  What powers these infrared beacons is not entirely understood, but they appear to be driven by massive bursts of star formation following collisions between entire galaxies!

Discovered by the Infrared Astronomical Satellite in 1983, ULIRGs have been a puzzle for some time.  Though they emit light at all wavelengths, 98% of it is infrared (unlike our galaxy, which emits about 30% infrared).  The ULIRGs infrared luminosity is equivalent to over one trillion suns.  Furthermore, this immense energy is concentrated in the centers of these galaxies, radiating from a compact region a few thousand light-years across.

How does a galaxy concentrate so much energy into a relatively tiny volume of space?  By smashing two galaxies together. 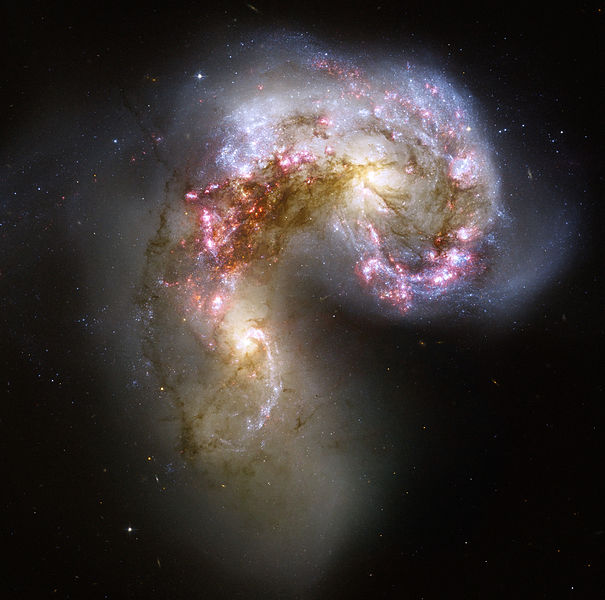 Collisions between galaxies are common.  All across the sky, astronomers see pairs of galaxies merging to form a new, larger galaxy.  Our own galaxy is currently cannibalizing two tiny systems – the Large and Small Magellanic Clouds visible in the Southern Hemisphere – and is on a collision course with our largest galactic neighbor, the Andromeda Galaxy, four billion years from now.

When galaxies collide, they rarely smash into each other head-on.  The collision is more like a glancing blow.  The two galaxies pass each other and, as they do, their mutual gravitational attraction slows them down.  Threads of stripped off gas and stars – called tidal tails – form bridges connecting the galaxies.  Robbed of momentum, the galaxies slow to a stop, turn around, and start falling towards each other again.  The galaxies become further entangled as their stars intermingle.  Eventually, their separate identities are lost as two galaxies become one.

A galactic collision is quite a spectacular and energetic sight.  In the individual galaxies, gravitational torques cause interstellar hydrogen gas to spiral into the galactic center.  All this inrushing gas gets rapidly compressed.  Shock waves ripple through the funneled hydrogen and trigger waves of star formation – a starburst.  The center of the galaxy lights up with the hot, blue light of young stars.

Starbursts typically only last a few hundred million years.  Usually, the visible and ultraviolet light of new stars is hidden by shrouds of interstellar dust that get caught up in the galactic gas flows.  The hot light from these young stars heats up the dust cocoons in which they are born.  The dust responds by glowing with infrared light.  The most powerful show up in our telescopes as ULIRGs. 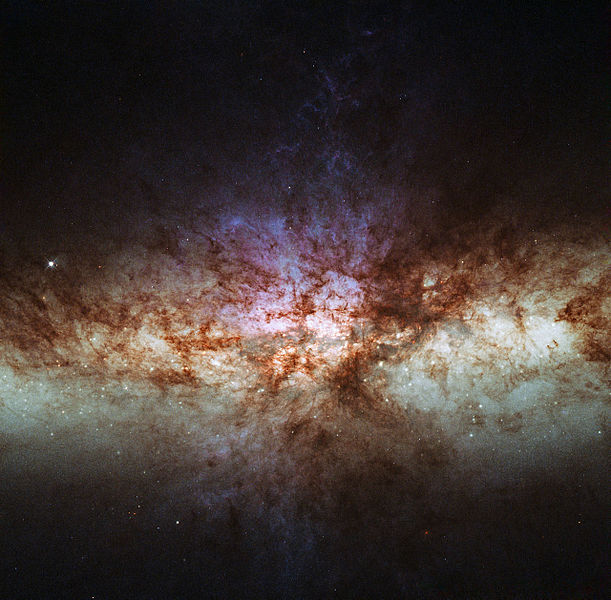 ULIRGs are just one step in the evolution of galaxies.  The sudden appearance of new, massive stars leads to a wave of supernovae in the galactic core and the creation of black holes.  The black holes feed on the banquet of raw material surrounding them and eventually become supermassive monsters many millions or billions of times heavier than our sun.  These exotic beasts can drive engines of superheated gas disks spiraling down upon them.  The disks release enough energy to blow the interstellar material thousands of light-years into intergalactic space, evacuating the galactic core and momentarily shining as a super-bright quasar.  Robbed of fresh ingredients, both the starburst and the black hole eventually shut down and go quiet. 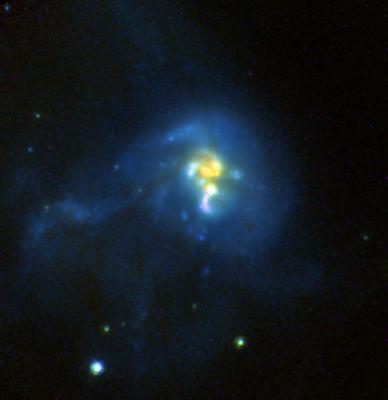 IRAS 19297-0406 is a ULIRG caused by four galaxies merging together one billion light-years from Earth. The colliding region (yellow and blue), where 200 new stars are born per year, is 100 times brighter than the Milky Way and about half its size. Credit: NASA, the NICMOS Group (STScI, ESA), and the NICMOS Science Team (Univ. of Arizona)

Our own galaxy might have gone through a similar period – or possibly waves of starbursting epochs – as it grew through the coalescence of smaller galaxies.  Perhaps in four billion years time, as we collide with Andromeda, it will happen again.  What would that look like to humanity’s grandchildren?  The Milky Way currently produces only a couple of new stars annually. In what way would the sky change if we lived in a galaxy that burst with the light of hundreds of new stars lighting up every year?

ULIRGs – Ultra Luminous InfraRed Galaxies – help unravel the story of galactic evolution and the history of the Milky Way.  In infrared telescopes, they shine with the light of a trillion suns – but only for a while.  They are, much like ourselves, ephemeral.  They fill the universe with infrared light from interstellar dust that is bombarded with the energy of a multitude of new stars and then, quietly, fade back into obscurity.