One moon is small and irregular, and the other is larger and round. These two moons typify the sorts of objects you see throughout our solar system. 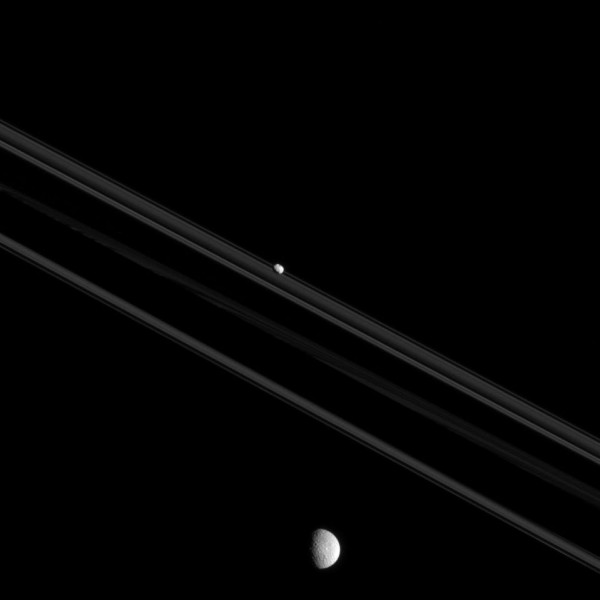 Saturn’s rings, and two of its moons, Mimas and Pandora. Image via Cassini spacecraft.

NASA released this image this week of two very different moons of the planet Saturn. The moon at the top of the image is Pandora. It’s small as Saturn moons go, only 50 miles (81 km) across, and it’s elongated and irregular in shape. The moon at the bottom of the image is Mimas, 246 miles (396 km) across. Mimas is considered a medium-sized moon of Saturn, and it’s large enough to have pulled itself into a the shape of sphere via its own self-gravity. These two moons typify the sorts of objects we have found throughout our solar system … and, no doubt, will find orbiting distant suns as well. NASA said in an October 13, 2015 statement about this image:

The shapes of moons can teach us much about their history. For example, one explanation for Pandora’s elongated shape and low density is that it may have formed by gathering ring particles onto a dense core.

This view looks toward the unilluminated side of the rings from 0.26 degrees below the ring plane. The image was taken in visible light with the Cassini spacecraft narrow-angle camera on July 26, 2015.