Traffic around Mars gets busy

With five active spacecraft now orbiting the planet, NASA has beefed up its traffic monitoring to make sure the Mars orbiters don’t get too close to each other. 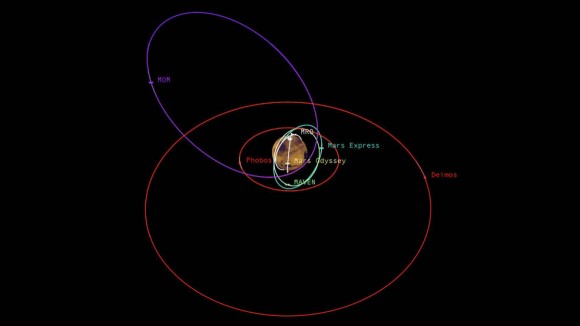 NASA has beefed up its collision-avoidance process – traffic monitoring, communication and maneuver planning – to ensure that Mars orbiters do not approach each other too closely.

Last year’s addition of two new spacecraft orbiting Mars brought the census of active Mars orbiters to five, the most ever. NASA’s Mars Atmosphere and Volatile Evolution (MAVEN) and India’s Mars Orbiter Mission joined the 2003 Mars Express from ESA (the European Space Agency) and two from NASA: the 2001 Mars Odyssey and the 2006 Mars Reconnaissance Orbiter (MRO). The newly enhanced collision-avoidance process also tracks the approximate location of NASA’s Mars Global Surveyor, a 1997 orbiter that is no longer working.

Traffic management at Mars is much less complex than in Earth orbit, where more than 1,000 active orbiters plus additional pieces of inactive hardware add to hazards. As Mars exploration intensifies, though, and will continue to do so with future missions, precautions are increasing. The new process was established to manage this growth as new members are added to the Mars orbital community in years to come.

It’s not just the total number spacecraft that matters, but also the types of orbits missions use for achieving their science goals. MAVEN, which reached Mars on September 21, 2014, studies the upper atmosphere. It flies an elongated orbit, sometimes farther from Mars than NASA’s other orbiters and sometimes closer to Mars, so it crosses altitudes occupied by those orbiters. For safety, NASA also monitors positions of ESA’s and India’s orbiters, which both fly elongated orbits.

Previously, collision avoidance was coordinated between the Odyssey and MRO navigation teams. There was less of a possibility of an issue. MAVEN’s highly elliptical orbit, crossing the altitudes of other orbits, changes the probability that someone will need to do a collision-avoidance maneuver. We track all the orbiters much more closely now. There’s still a low probability of needing a maneuver, but it’s something we need to manage.

All five active Mars orbiters use the communication and tracking services of NASA’s Deep Space Network, which is managed at JPL. This brings trajectory information together, and engineers can run computer projections of future trajectories out to a few weeks ahead for comparisons.

It’s a monitoring function to anticipate when traffic will get heavy. When two spacecraft are predicted to come too close to one another, we give people a heads-up in advance so the project teams can start coordinating about whether any maneuvers are needed.

The amount of uncertainty in the predicted location of a Mars orbiter a few days ahead is more than a mile (more than two kilometers). Calculating projections for weeks ahead multiplies the uncertainty to dozens of miles, or kilometers. In most cases when a collision cannot be ruled out from projections two weeks ahead, improved precision in the forecasting as the date gets closer will rule out a collision with no need for avoidance action. Mission teams for the relevant orbiters are notified in advance when projections indicate a collision is possible, even if the possibility will likely disappear in subsequent projections. This situation occurred on New Year’s weekend, 2015.

On January 3, automated monitoring determined that two weeks later, MAVEN and MRO could come within about two miles (three kilometers) of each other, with large uncertainties remaining in the exact passing distance. Although that was a Saturday, automatic messages went out to the teams operating the orbiters. Guinn said:

In this case, before the timeline got short enough to need to plan an avoidance maneuver, the uncertainties shrank, and that ruled out the chance of the two spacecraft coming too near each other.

This is expected to be the usual pattern, with the advance warning kicking off higher-level monitoring and initial discussions about options.

If preparations for an avoidance maneuver were called for, spacecraft commands would be written, tested and approved for readiness, but such commands would not be sent to a spacecraft unless projections a day or two ahead showed probability of a hazardous conjunction. The amount of uncertainty about each spacecraft’s exact location varies, so the proximity considered unsafe also varies. For some situations, a day-ahead projection of two craft coming within about 100 yards (100 meters) of each other could trigger a maneuver.

The new formal collision-avoidance process for Mars is part of NASA’s Multi-Mission Automated Deep-Space Conjunction Assessment Process. A side benefit of it is that information about when two orbiters will be near each other – though safely apart – could be used for planning coordinated science observations. The pair could look at some part of Mars or its atmosphere from essentially the same point of view simultaneously with complementary instruments.

Bottom line: Five active spacecraft are now orbiting Mars. To make sure the orbiters don’t get too close to each other, NASA has beefed up its collision-avoidance process – traffic monitoring, communication and maneuver planning.