Astronomers have traced some mysterious near-Earth asteroids back to their likely source. 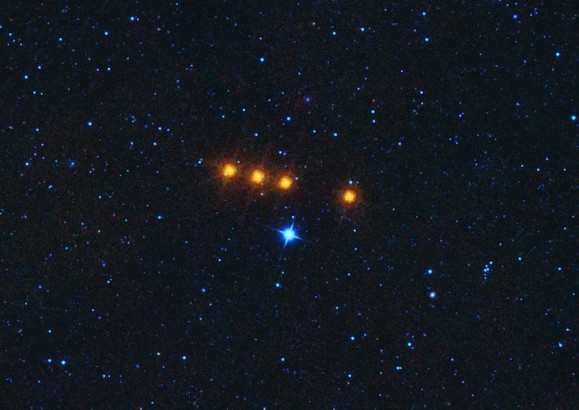 The asteroid Euphrosyne glides across a field of background stars in this time-lapse view from NASA’s WISE spacecraft. WISE obtained the images used to create this view over a period of about a day around May 17, 2010, during which it observed the asteroid four times. Image credit: NASA/JPL-Caltech

A new NASA study has traced some mysterious members of the near-Earth asteroid population back to their likely source – the Euphrosyne family of dark asteroids in the outer asteroid belt.

There are over 700,000 asteroidal bodies currently known in the main belt between planets Mars and Jupiter, ranging in size from large boulders to about 60 percent of the diameter of Earth’s moon, with many yet to be discovered. This makes finding the specific point of origin of most of near-Earth asteroids extremely difficult.

Distributed at the outer edge of the asteroid belt, the Euphrosynes (pronounced you-FROH-seh-nees) have an unusual orbital path that juts well above the ecliptic, the equator of the solar system. The asteroid after which they are named, Euphrosyne – for an ancient Greek goddess of mirth – is about 156 miles (260 kilometers) across and is one of the 10 largest asteroids in the main belt. Current-day Euphrosyne is thought to be a remnant of a massive collision about 700 million years ago that formed the family of smaller asteroids bearing its name. Scientists think this event was one of the last great collisions in the solar system.

The new study, conducted by scientists at NASA’s Jet Propulsion Laboratory (JPL) in Pasadena, California, used the agency’s orbiting Near-Earth Object Wide-field Infrared Survey Explorer (NEOWISE) telescope to look at these unusual asteroids to learn more about Near Earth Objects, or NEOs, and their potential threat to Earth.

NEOs are bodies whose orbits around the sun approach the orbit of Earth; this population is short-lived on astronomical timescales and is fed by other reservoirs of bodies in our solar system. As they orbit the sun, NEOs can occasionally have close approaches to Earth. For this reason alone – the safety of our home planet – the study of such objects is important.

As a result of their study, the JPL researchers believe the Euphrosynes may be the source of some of the dark NEOs found to be on long, highly inclined orbits. They found that, through gravitational interactions with Saturn, Euphrosyne asteroids can evolve into NEOs over timescales of millions of years.

NEOs can originate in either the asteroid belt or the more distant outer reaches of the solar system. Those from the asteroid belt are thought to evolve toward Earth’s orbit through collisions and the gravitational influence of the planets. Originating well above the ecliptic and near the far edge of the asteroid belt, the forces that shape their trajectories toward Earth are far more moderate.

Joseph Masiero, is JPL’s lead scientist on the Euphrosynes study. He said:

The Euphrosynes have a gentle resonance with the orbit of Saturn that slowly moves these objects, eventually turning some of them into NEOs. This particular gravitational resonance tends to push some of the larger fragments of the Euphrosyne family into near-Earth space.

By studying the Euphrosyne family asteroids with NEOWISE, JPL scientists have been able to measure their sizes and the amount of solar energy they reflect. Since NEOWISE operates in the infrared portion of the spectrum, it detects heat. Therefore, it can see dark objects far better than telescopes operating at visible wavelengths, which sense reflected sunlight. Its heat-sensing capability also allows it to measure sizes more accurately.

The 1,400 Euphrosyne asteroids studied by Masiero and his colleagues turned out to be large and dark, with highly inclined and elliptical orbits. These traits make them good candidates for the source of some of the dark NEOs the NEOWISE telescope detects and discovers, particularly those that also have highly inclined orbits. Masiero said:

Most near-Earth objects come from a number of sources in the inner region of the main belt, and they are quickly mixed around. But with objects coming from this family, in such a unique region, we are able to draw a likely path for some of the unusual, dark NEOs we find back to the collision in which they were born.

A better understanding of the origins and behaviors of these mysterious objects will give researchers a clearer picture of asteroids in general, and in particular the NEOs that skirt our home planet’s neighborhood. Such studies are important, and potentially critical, to the future of humanity.

Bottom line: A new NASA study has traced some mysterious members of the near-Earth asteroid population back to their likely source – the Euphrosyne family of dark asteroids in the outer asteroid belt.