An alarm indicated a possible leak of toxic ammonia. Astronauts evacuated the U.S. side of the station. Later, NASA said the problem might have been a faulty sensor. 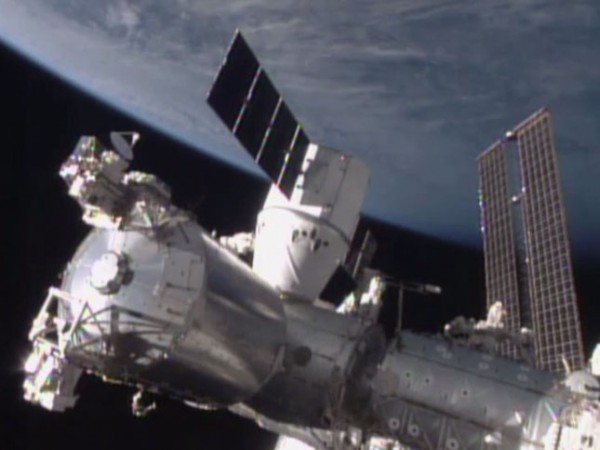 This image of ISS is from Monday of this week, when the SpaceX Dragon cargo spacecraft arrived and berthed to ISS, bringing needed supplies. Image via NASA

NASA confirmed at 11 a.m. EST Wednesday (January 14, 2015 at 1600 UTC) that there was no hard evidence for a real leak of toxic chemicals on the International Space Station (ISS). The U.S. side of the space station was evacuated and sealed off earlier Wednesday following coolant loop pressure increases that possibly indicated a leak of toxic ammonia. The evacuation occurred around 4 a.m. EST (0900 UTC) Wednesday morning. NASA spent the day powering systems back up on the U.S. side, and analyzing the event throughout the day.

All six members of the space station’s crew are safe. Once NASA confirmed that the emergency was a false alarm, the astronauts still had to wait on the Russian side of ISS throughout the day, waiting for equipment on the U.S. segment to be powered back up. NASA tweeted at 3:05 p.m. EST that the hatch was reopened and the astronauts returned. There was no ammonia in the area, NASA said. 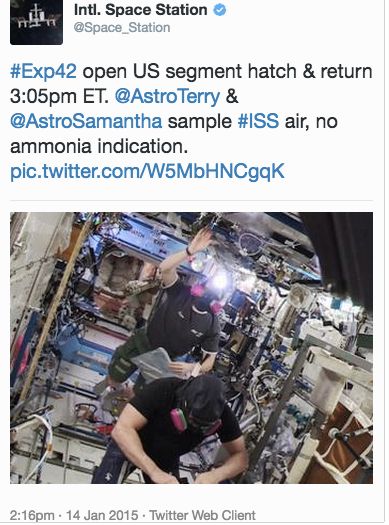 NASA said the crew “acted appropriately” in evacuating the U.S. portion of the station and that toxic chemical leaks (especially an ammonia leak) is one of three emergency scenarios that the crew trains for, the other two being decompression (sudden pressure loss in the capsule) and fire.

The six-member crew donned emergency masks and hurried to the Russian side of the orbiting lab after the alert. They closed the hatch to the U.S. side behind them. NASA said that, although the crew was unable to carry out experiments that were planned, no scientific research has been lost as a result of this incident.

The Russian Federal Space Agency had told news outlets in Moscow that the cause was a toxic chemical leak – characterizing the situation as a leak of “harmful substances” – but NASA said there was no data to confirm a leak, and stressed that the crew was safe.

The crew is safe, they’re in the Russian segment, and we’re working on understanding exactly what went on … we saw an increase in water loop pressure, on the crew cabin pressure, that could be indicative of an ammonia leak in a worst-case scenario.

Although some reports, citing NASA officials, characterized the issue as an ammonia leak, NASA tweeted on Wednesday morning that there is “no ammonia leak confirmed.”

Ammonia is used in the cooling and heating systems at the orbiting outpost. It is a toxic substance that can cause major health problems if breathed in.

Bottom line: An alarm on the International Space Station at 4 a.m. EST (0900 UTC) on Wednesday, January 14, 2015, appeared to indicate a possible leak of toxic ammonia. Astronauts evacuated the U.S. side of the station. NASA later confirmed that the crew is safe and the problem might have been a faulty sensor.