Take a video tour of asteroid Bennu’s remarkable terrain and read a list of 10 cool things scientists know about this pristine remnant from the early days of our solar system.

Captured on October 20, 2020, during the OSIRIS-REx mission’s sample collection event on asteroid Bennu, this series of 82 images shows the spacecraft’s field of view as it approaches and touches down on Bennu’s surface. The sampling event brought the spacecraft all the way down to the sample site, and the team on Earth received confirmation of a successful touchdown at 6:08 p.m. Preliminary data show the sampling head touched Bennu’s surface for approximately 6 seconds, after which the spacecraft performed a back-away burn. See more video and read more from NASA.

On Tuesday (October 20, 2020), NASA’s OSIRIS-REx spacecraft unfurled its robotic arm and touched an asteroid – known as Bennu – to collect dust and pebbles from the surface. The aim of the OSIRIS-REx mission is to bring the sample back to Earth for study in 2023.

The OSIRIS-REx spacecraft, about the size of a 15-passenger van, is currently orbiting the asteroid Bennu 200 million miles (321 million km) from Earth. When the OSIRIS-REx spacecraft arrived at asteroid Bennu in December 2018, its close-up images confirmed what mission planners had suspected: Bennu is made of loose material weakly clumped together by gravity, and shaped like a spinning top.

Scientists had expected Bennu’s surface to consist of fine-grained material, like a sandy beach, but the spaceship’s images showed instead a rugged world littered with boulders the size of cars, the size of houses, even the size of football fields. Using OSIRIS-REx’s high-resolution imagery and data from its laser altimeters – devices that use lasers to map Bennu’s terrain – NASA scientists have created the video tour, below, of Bennu’s remarkable terrain.

Bennu contains material from the early solar system and may contain the molecular precursors to life and Earth’s oceans. OSIRIS-REx engineers and scientists will use several techniques to identify and measure Tuesday’s sample remotely. If the October 20 sample collection event provided enough of a sample, mission teams will command the spacecraft to begin stowing the cargo to begin its journey back to Earth in March 2021. Otherwise, they will prepare for another attempt in January 2021.

On October 15, 2020, NASA released the following list of what we already know (and some of what we hope to find out) about this pristine remnant from the early days of our solar system.

Bennu is classified as a B-type asteroid, which means it contains a lot of carbon in and along with its various minerals. Bennu’s carbon content creates a surface on the asteroid that reflects about 4% of the light that hits it, and that’s not a lot. For contrast, the solar system’s brightest planet, Venus, reflects around 65% of incoming sunlight, and Earth reflects about 30%. Bennu is a carbonaceous asteroid that hasn’t undergone drastic, composition-altering change, meaning that on and below its deeper-than-pitch-black surface are chemicals and rocks from the birth of the solar system.

Bennu has been (mostly) undisturbed for billions of years. Not only is it conveniently close and carbonaceous, it is also so primitive that scientists calculated it formed in the first 10 million years of our solar system’s history, over 4.5 billion years ago. Thanks to the Yarkovsky effect – the slight push created when the asteroid absorbs sunlight and re-emits that energy as heat – and gravitational tugs from other celestial bodies, it has drifted closer and closer to Earth from its likely birthplace: the main asteroid belt between Mars and Jupiter. 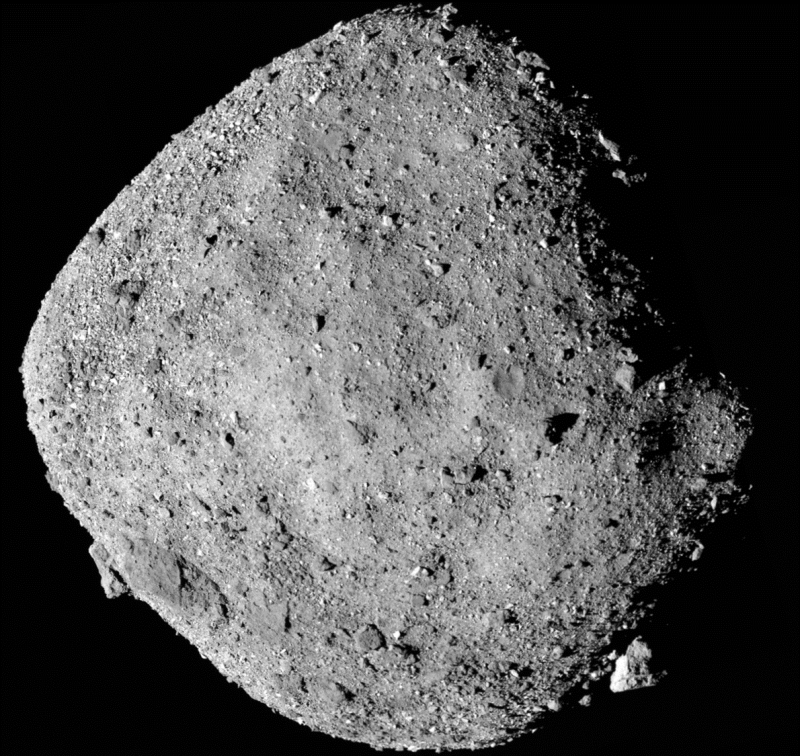 This mosaic image of asteroid Bennu is composed of 12 PolyCam images collected on December 2, 2018, by the OSIRIS-REx spacecraft from a range of 15 miles (24 km). Image via NASA/ Goddard/ University of Arizona.

3. Bennu is a ‘rubble-pile’ asteroid. But don’t let the name trick you.

Is Bennu space trash or scientific treasure? While “rubble pile” sounds like an insult, it’s actually a real astronomy classification. Rubble-pile asteroids like Bennu are celestial bodies made from lots of pieces of rocky debris that gravity compressed together. This kind of detritus is produced when an impact shatters a much larger body (for Bennu, it was a parent asteroid around 60 miles [about 100 km] wide). Bennu, for contrast, is about as tall as the Empire State Building (1,454 feet or 443 m). It likely took just a few weeks for these shards of space wreckage to coalesce into the rubble-pile that is Bennu. Bennu is full of holes inside, with 20% to 40% of its volume being empty space. The asteroid is actually in danger of flying apart, if it starts to rotate much faster or interacts too closely with a planetary body.

4. Asteroids may harbor hints about the origin of all life on Earth …

Bennu is a primordial artifact preserved in the vacuum of space, orbiting among planets and moons and asteroids and comets. Because it is so old, Bennu could be made of material containing molecules that were present when life first formed on Earth. All Earth life forms are based on chains of carbon atoms bonded with oxygen, hydrogen, nitrogen and other elements. However, organic material like the kind scientists hope to find in a sample from Bennu doesn’t necessarily always come from biology. It would, though, further scientists’ search to uncover the role that asteroids rich in organics played in catalyzing life on Earth.

Extraterrestrial jewelry sounds great, and Bennu is likely to be rich in platinum and gold compared to the average crust on Earth. Although most asteroids aren’t made almost entirely of solid metal (but Psyche may be!), many do contain elements that could be used industrially in lieu of Earth’s finite resources. Closely studying this asteroid will give answers to questions about whether asteroid mining during deep-space exploration and travel is feasible. Although rare metals attract the most attention, water is likely to be the most important resource in Bennu. Water (two hydrogen atoms bound to an oxygen atom) can be used for drinking or separated into its components to get breathable air and rocket fuel. Given the high cost of transporting material into space, if astronauts can extract water from an asteroid for life support and fuel, the cosmic beyond is closer than ever to being human-accessible.

Gravity isn’t the only factor involved with Bennu’s destiny. The side of Bennu facing the sun gets warmed by sunlight, but a day on Bennu lasts just 4 hours and 17.8 minutes, so the part of the surface that faces the sun shifts constantly. As Bennu continues to rotate, it expels this heat, which gives the asteroid a tiny push towards the sun by about 0.18 miles (approximately 0.29 km) per year, changing its orbit.

7. There’s a small change that Bennu will impact Earth late in the next century.

The NASA-funded Lincoln Near-Earth Asteroid Research team discovered Bennu in 1999. NASA’s Planetary Defense Coordination Office continues to track near-Earth objects (NEOs), especially those like Bennu that will come within about 4.6 million miles (7.5 million kilometers) of Earth’s orbit and are classified as potentially hazardous objects. Between the years 2175 and 2199, the chance that Bennu will impact Earth is only 1 in 2,700, but scientists still don’t want to turn their backs on the asteroid. Bennu swoops through the solar system on a path that scientists have confidently predicted, but they will refine their predictions with the measurement of the Yarkovsky effect by OSIRIS-REx and with future observations by astronomers.

Captured on August 11, 2020, during the second rehearsal of the OSIRIS-REx mission’s sample collection event, this series of images shows the SamCam imager’s field of view as the NASA spacecraft approaches asteroid Bennu’s surface. The rehearsal brought the spacecraft through the first three maneuvers of the sampling sequence to a point approximately 131 feet (40 meters) above the surface, after which the spacecraft performed a back-away burn. Read more about this image. Image via NASA/ Goddard/ University of Arizona.

8. Sampling Bennu will be harder than we thought

Early Earth-based observations of the asteroid suggested it had a smooth surface with a regolith (the top layer of loose, unconsolidated material) composed of particles less than an inch (a couple of centimeters) large at most. As the OSIRIS-REx spacecraft was able to take pictures with higher resolution, it became evident that sampling Bennu would be far more hazardous than what was previously believed: new imagery of Bennu’s surface show that it’s mostly covered in massive boulders, not small rocks. OSIRIS-REx was designed to be navigated within an area on Bennu of nearly 2,000 square yards (meters), roughly the size of a parking lot with 100 spaces. Now, it must maneuver to a safe spot on Bennu’s rocky surface within a constraint of less than 100 square yards, an area of about five parking spaces.

9. Bennu was named after an ancient Egyptian deity

Bennu was named in 2013 by a nine-year-old boy from North Carolina who won the Name that Asteroid! competition, a collaboration between the mission, the Planetary Society, and the LINEAR asteroid survey that discovered Bennu. Michael Puzio won the contest by suggesting that the spacecraft’s Touch-and-Go Sample Mechanism (TAGSAM) arm and solar panels resemble the neck and wings in illustrations of Bennu, whom ancient Egyptians usually depicted as a gray heron. Bennu is the ancient Egyptian deity linked with the sun, creation and rebirth. Puzio also noted that Bennu is the living symbol of Osiris. The myth of Bennu suits the asteroid itself, given that it is a primitive object that dates back to the creation of the solar system. Themes of origins and rebirth are part of this asteroid’s story. Birds and bird-like creatures are also symbolic of rebirth, creation and origins in various ancient myths. 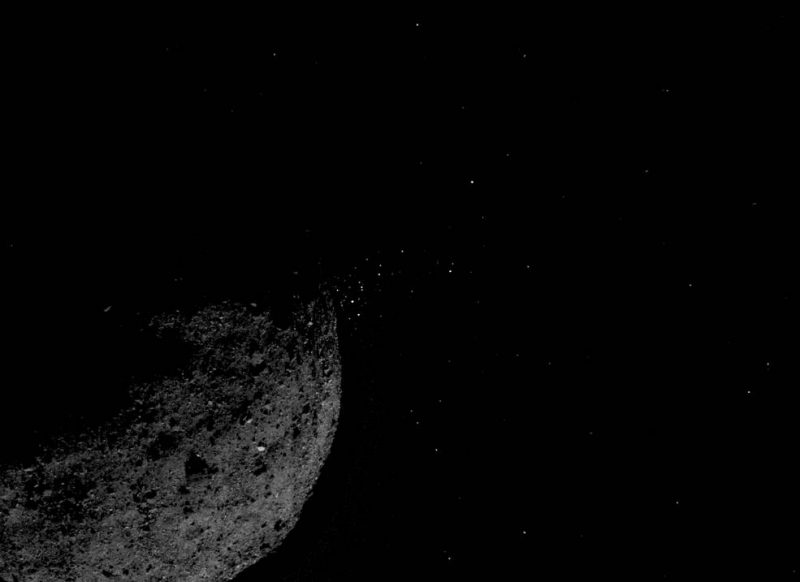 This view of asteroid Bennu ejecting particles from its surface on January 19, 2019, was created by combining two images taken on board NASA’s OSIRIS-REx spacecraft. Other image processing techniques were also applied, such as cropping and adjusting the brightness and contrast of each image. Read more about this image. Image via NASA/ Goddard/ University of Arizona/ Lockheed Martin.

10. Bennu is still surprising us!

The spacecraft’s navigation camera observed that Bennu was spewing out streams of particles a couple of times each week. Bennu apparently is not only a rare active asteroid (only a handful of them have been as yet identified), but, along with Ceres as explored by NASA’s Dawn mission, may be among the first of its kind that humanity has observed from a spacecraft. More recently, the mission team discovered that sunlight can crack rocks on Bennu, and that it has pieces of another asteroid scattered across its surface. More pieces will be added to Bennu’s cosmic puzzle as the mission progresses, and each brings the solar system’s evolutionary history into sharper and sharper focus.

Bottom line: Video of sample collection on asteroid Bennu, and 10 things to know about Bennu and the OSIRIS-REx mission.