Tau Boötis was the 1st star other than our sun seen to undergo a magnetic reversal. This post includes 2 great videos about our sun’s pole flips. 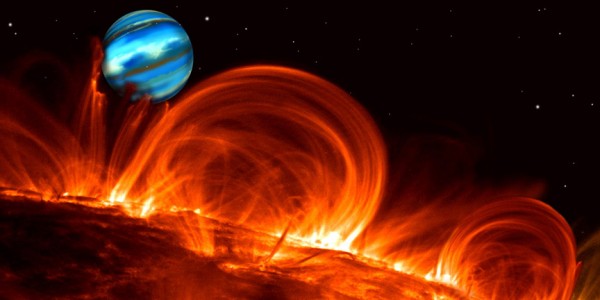 March 13, 2008. On this date, a faint star in the constellation Boötes the Herdsman went down in astronomical history. It’s the publication date of a study of the star Tau Boötis, seen by an international team of astronomers to flip its north and south magnetic poles. These astronomers had been engaged in mapping the magnetic fields of stars. But Tau Boötis was the first star, other than our sun, seen to undergo a magnetic reversal. The study was published in the peer-reviewed journal Monthly Notices of the Royal Astronomical Society.

Though it’s not a bright star, you can see Tau Boötis on April evenings. It’s near the blazing yellow-orange star Arcturus, brightest star in your eastern sky in the evening in April, assuming you’re in the Northern Hemisphere. To verify that you’re looking at Arcturus, look for the Big Dipper up high in your northern sky. Follow the arc of the Big Dipper’s handle to Arcturus. Tau Boötis is some 70 times fainter than Arcturus. You’ll see its location on the chart below. 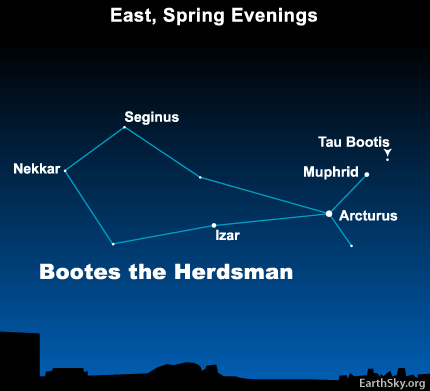 The star Tau Boötis can be seen on April evenings.

The video below was published on YouTube in December 2013, when the current solar cycle was near its peak. It features solar astrophysicist Alex Young, talking about Solar Cycle 24 and about what a magnetic flip means for Earth.

Now check out another cool video, below. It’s from NASA’s Goddard Space Flight Center and is a visualization, showing the position of the sun’s magnetic fields from January 1997 to December 2013. Magenta lines show where the sun’s overall field is negative and the green lines show where it is positive. A region with more electrons is negative, the region with less is positive. Additional gray lines represent areas of local magnetic variation.

Fun to think that other stars (most likely) do this, too!

Bottom line: On April 13, 2008, astronomers published the first study showing the pole flip, or magnetic reversal, of a star other than our sun. The star was Tau Boötis, visible on April evenings. This post includes 2 great videos about our sun’s magnetic pole reversals.