Titan’s strange lakes may be sinkholes

What forms the depressions holding liquid hydrocarbon lakes on Saturn’s moon Titan? It might be a process similar to that creating caves and sinkholes on Earth. 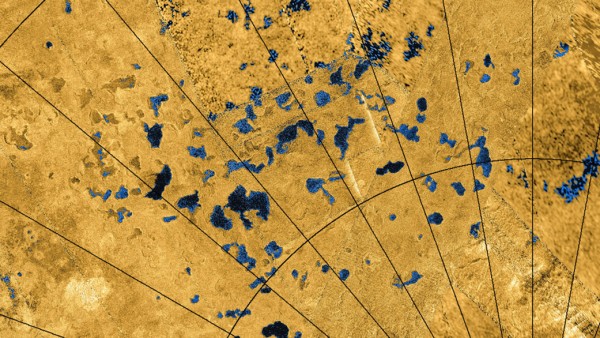 Radar images from NASA’s Cassini spacecraft reveal many lakes on Titan’s surface, some filled with liquid, and some appearing as empty depressions. Image via NASA/JPL-Caltech/ASI/USGS.

A new study from the astounding Cassini mission suggests that Saturn’s large moon Titan may undergo geological processes similar to those that create sinkholes on Earth. The study might answer the mystery of how Titan – known to be home to seas and lakes filled with liquid hydrocarbons – came to have depressions on its surface into which those liquids can gather. Led by Thomas Cornet of the European Space Agency (ESA), the study published on June 4, 2015 in the Journal Geophysical Research suggests the depressions for Titan’s hydrocarbon lakes form by the slow erosion of dissolvable rock over millions of years.

Titan is a unique world in our solar system. Aside from Earth, it is the only body in our solar system known to possess liquid lakes and seas, observed by the Cassini spacecraft, which has been orbiting Saturn, weaving among its moons, since 2004. Titan’s dense atmosphere, its distance from the sun, and its chemical composition all make it an irresistible focus for astronomers.

Cassini has identified two separate forms of methane- and ethane-filled depressions near Titan’s poles. Observed as vast seas several hundred miles across and up to several hundred feet deep, these distinct features are connected by a network of branching river-like channels. Cassini has also observed a number of smaller, shallower lakes with rounded edges and steep walls, all found in generally flat areas.

The lakes are not associated with the rivers but actually are filled by liquid hydrocarbon from below the surface. Several lakes are thought to fill and dry again during the 30-year seasonal cycle on Saturn and Titan (Saturn takes about 30 Earth-years to orbit the sun).

But exactly how these depressions initially form was poorly understood – until now. 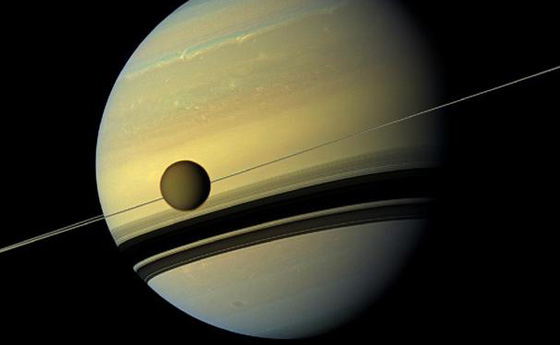 Cornet and his team discovered that Titan’s lakes resemble the karstic topography of Earth, which are landscapes sculpted by erosion of dissolvable rock from groundwater and rainfall. Over time, this percolation causes fractures in the rocks, creating sinkholes, caves, and saltpans. Depending on climate, temperature, rainfall rate, and the constitution of the rocks, the rate of erosion can change dramatically from place to place.

This same method of erosion may occur on Titan’s surface. Cornet and his team calculated how long it would take for parts of Titan’s surface to dissolve, under the assumption that the surface is covered in solid organic material and the main dissolving agent is liquid hydrocarbons.

Mimicking Titan’s present day climate models scientists found that it would take 50 million years to create a 300-foot (100 meter) depression at Titan’s rainy polar regions. Scientists then reduced the rainfall and calculated that the processes would take much longer, closer to 375 million years. Both results remain consistent with the youthful age of the moon’s surface. Cornet stated to NASA:

We compared the erosion rates of organics in liquid hydrocarbons on Titan with those of carbonate and evaporite minerals in liquid water on Earth.

We found that the dissolution process occurs on Titan some 30 times slower than on Earth due to the longer length of Titan’s year and the fact it only rains during Titan summer. Nonetheless, we believe that dissolution is a major cause of landscape evolution on Titan and could be the origin of its lakes.

While the results remain consistent to the topographic features currently observed on Titan, uncertainties still remain. The composition of Titan’s surface is not extensively known, and neither are its precipitation patterns. However, researchers remain optimistic that these mysteries, too, will ultimately be understood. Nicolas Altobelli, ESA’s Cassini project scientist, said in a June 19 statement:

By comparing Titan’s surface features with examples on Earth and applying a few simple calculations, we have found similar land-shaping processes that could be operating under very different climate and chemical regimes.

This is a great comparative study between our home planet and a dynamic world more than a billion kilometers away in the outer solar system. 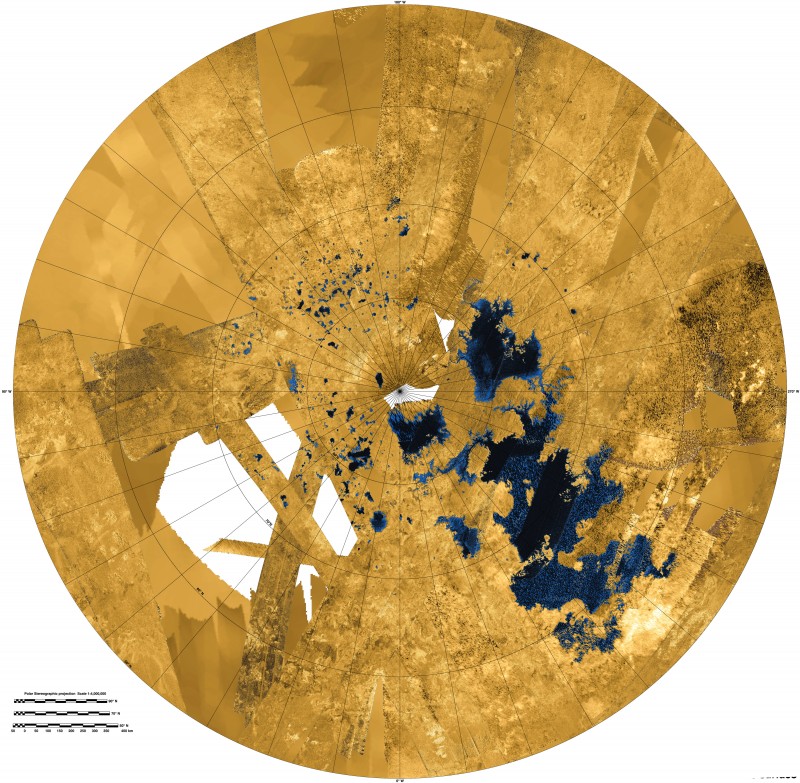 The lakes of Titan’s northern hemisphere. Image via NASA/JPL-Caltech/ASI/USGS. Read more about this image.

Bottom line: Saturn’s large moon Titan may undergo geological processes similar to those that create sinkholes on Earth. The study – based on data from the Cassini mission – might answer the mystery of how Titan came to have depressions on its surface into which those liquid hydrocarbons can gather into lakes.