A new study from researchers in Tokyo helps explain how cosmic rays affect prebiotic organic chemistry in the atmosphere of Saturn’s moon Titan. 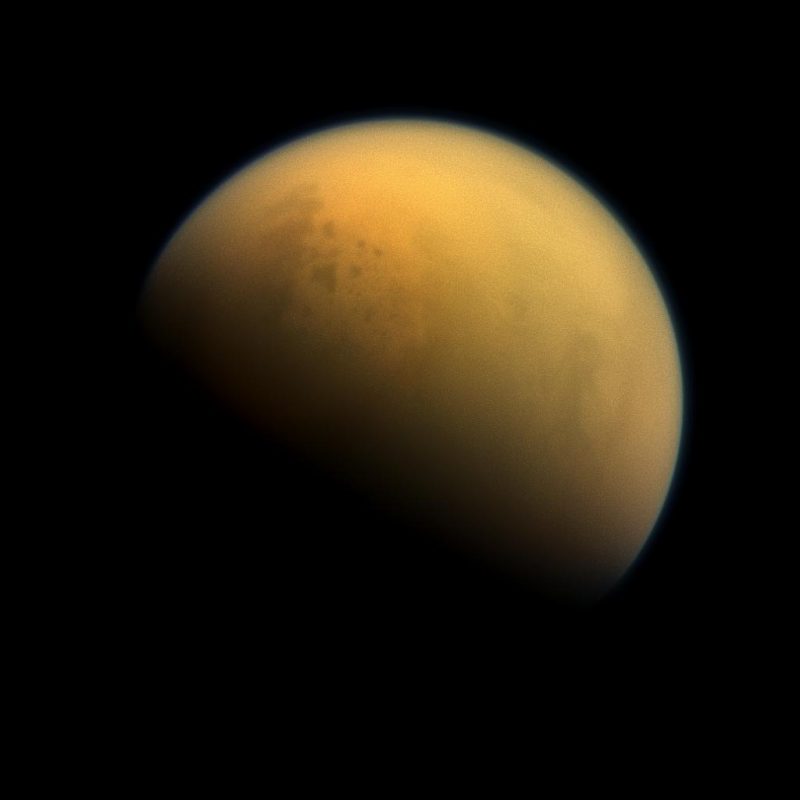 Titan and its thick, hazy atmosphere as seen by the Cassini spacecraft in 2013. Some of the methane/ethane lakes near the north pole can just be seen through the haze. Image via NASA/ JPL-Caltech/ Space Science Institute.

Saturn’s largest moon, Titan, is rich in organic compounds, the chemical compounds upon which all known life is based. Both Titan’s surface and its atmosphere contain these compounds. Since Titan is thought to be similar to an early Earth, scientists are interested in how these molecules are formed.

Now, researchers say they’ve found a major clue about this prebiotic process, called abiogenesis, the process by which life arises from non-living matter. Using the Atacama Large Millimeter/submillimeter Array (ALMA), they have discovered a chemical footprint in Titan’s atmosphere, the result of cosmic rays – high-energy particles from deep space – hitting the atmosphere and affecting the formation of nitrogen-bearing organic molecules.

The new peer-reviewed results were announced by ALMA on February 14, 2020, and were published in The Astrophysical Journal on February 17, 2020.

This is the first time that such processes have been observed directly on Titan. The research team found faint, but firm signals of acetonitrile (CH3CN) and its rare isotopomer CH3C15N in the ALMA data. Takahiro Iino, of the University of Tokyo, is the study lead author. He said in a statement:

We found that the abundance of 14N in acetonitrile is higher than those in other nitrogen bearing species such as HCN and HC3N. It well matches the recent computer simulation of chemical processes with high energy cosmic rays.

ALMA spectra of CH3C14N and CH3C15N in Titan’s atmosphere. Dotted vertical lines indicate the frequency of emission lines of two molecules predicted by a theoretical model. Image via Iino et al./ The University of Tokyo/ ALMA.

Chemical processes in Titan’s atmosphere can also be affected by ultraviolet light (radiation) from the sun. According to an ALMA statement about the research:

In the upper atmosphere, UV light selectively destroys nitrogen molecules containing 15N because the UV light with the specific wavelength that interacts with 14N14N is easily absorbed at that altitude. Thus, nitrogen-bearing species produced at that altitude tend to exhibit a high 15N abundance. On the other hand, cosmic rays penetrate deeper and interact with nitrogen molecules containing 14N. As a result, there is a difference in the abundance of molecules with 14N and 15N. The team revealed that acetonitrile in the stratosphere is more abundant in 14N than those of other previously measured nitrogen-bearing molecules.

Understanding how these chemical processes occur on Titan is important, the scientists say, because the current environment on Titan is considered to be a prebiotic laboratory in that it’s similar to our planet Earth just before, or when life started to evolve here. Some scientists theorize that there could be some form of primitive life on Titan, although this is far from being confirmed yet. 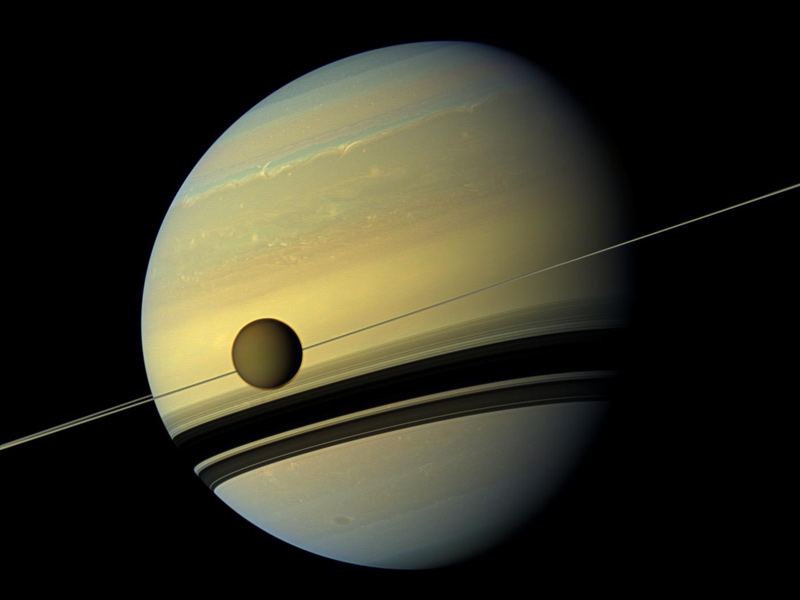 Stunning view of Titan in front of Saturn, as seen by Cassini. Image via NASA/ JPL-Caltech/ Space Science Institute.

The processes in Titan’s atmosphere can also be extrapolated to other solar system bodies with atmospheres. According to Hideo Sagawa, an associate professor at Kyoto Sangyo University and another member of the research team:

The process could be universal, so understanding the role of cosmic rays in Titan is crucial in overall planetary science.

A large amount of Titan data has been stored in the ALMA Science Archive, and now that data will be calibrated to remove fluctuations due to variations of on-site weather and mechanical glitches.

Titan was studied extensively by NASA’s Cassini spacecraft and its lander, Huygens. The moon is obscured by a permanent thick orange-ish haze, but Cassini peered through it with radar. It found a world that is eerily Earth-like in appearance, with seas, lakes, rivers and sand dunes. It even rains on Titan.

The “water” on Titan, however, is liquid methane/ethane since it is far too cold for liquid water. There is, however, evidence for a liquid water ocean beneath the surface, much like Europa, Enceladus or Ganymede, among others. The sand dunes are composed of particles of hydrocarbon organics. The Huygens probe landed in an old streambed, and found smooth “rocks,” similar to river rocks on Earth, thought to be composed of solid water ice. 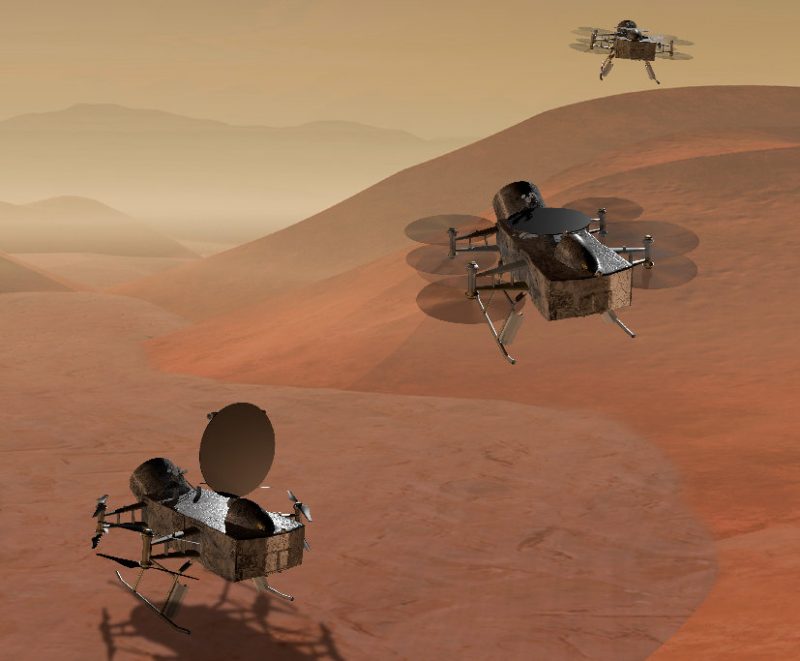 Superficially, Titan resembles Earth in many ways, yet it is also a uniquely alien world.

The next mission to Titan planned is Dragonfly, a drone-like probe that will be able to land in many different locations on Titan’s surface. In this way, it will be able to survey a much larger region of the Titanian landscape, unlike Huygens, which could only remain in one spot for a short amount of time. Dragonfly will launch in 2026 and arrive in 2034. As Thomas Zurbuchen, NASA’s associate administrator for science, explained:

Titan is unlike any other place in the solar system, and Dragonfly is like no other mission. It’s remarkable to think of this rotorcraft flying miles and miles across the organic sand dunes of Saturn’s largest moon, exploring the processes that shape this extraordinary environment. Dragonfly will visit a world filled with a wide variety of organic compounds, which are the building blocks of life and could teach us about the origin of life itself.

By understanding how prebiotic chemical processes can be affected by things like cosmic rays, scientists can learn more about the conditions on Titan that allow such prebiotic chemistry to occur. This has implications for not only the possibility of some form of life itself on this moon – even if seemingly remote – but also how life originated on Earth as well and the potential for life on other similar planets or moons orbiting other stars.