While in space, 12 generations of worms were found to reproduce and develop from egg to adulthood no differently than they would on Earth.

A tiny worm – about 1 millimeter in length – is proving a useful tool in studying how humans could handle long-distance space missions, including manned missions to the planet Mars, according to a new study announced today (November 29, 2011) by scientists at the University of Nottingham in England.

The findings could help with long-term goals to colonize Mars.

The research team – led by Nathaniel Szewczyk from the Division of Clinical Physiology in the School of Graduate Entry Medicine at the University of Nottingham – sent 4,000 worms known as Caenorhabditis elegans (C. elegans) up on the space shuttle Discovery. 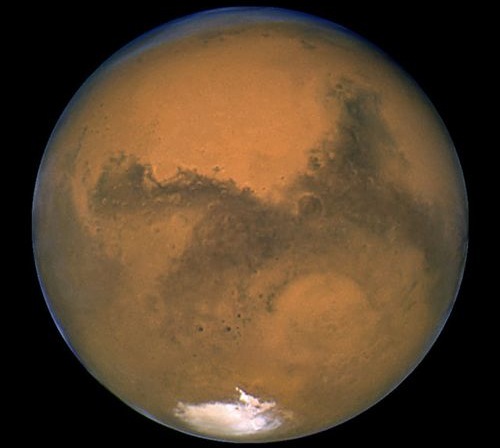 Some earthlings dream of colonizing Mars. Will tiny worms help teach us what we need to know to get there? Image Credit: NASA/JPL-Caltech

While aboard ISS, the worms were found to reproduce and develop from egg to adulthood no differently than they would on Earth. Importantly, the worms’ muscular systems also remained intact.

C. elegans is an ideal subject for studies like this, as it carries many biological similarities to humans. In an e-mail to EarthSky, Szewczyk wrote:

Both have fully developed neuro-muscular systems. Both share genes from a common ancestor; for example, many genes which when mutated give diseases in humans also do so in worms. With respect to spaceflight, both show changes in metabolism, and both show changes in expression of genes expressed in muscle, include decreased expression of the major contractile protein myosin.

Long-term manned space flight presents many challenges to the human body, such as radiation exposure and muscle deterioration due to decreased gravity. Studying the effects of space flight on the body is important for planning manned missions to other planets, and perhaps, one day, exoplanets orbiting distant suns.

In a press release, Szewczyk said:

A fair number of scientists agree that we could colonize other planets. While this sounds like science fiction, it is a fact that if mankind wants to avoid the natural order of extinction then we need to find ways to live on other planets. Thankfully most of the world’s space agencies are committed to this common goal. . . . Ultimately, we are now in a position to be able to remotely grow and study an animal on another planet.

The study is Szewczyk’s third mission with C. elegans, and a fourth followup mission began in 2009, with preliminary results released in in the journal PLoS ONE. The new research will be published November 30, 2011 in Interface, a journal of The Royal Society.