“If we lived around a star like this one, we wouldn’t have any satellite communications. In fact, it might be extremely difficult for life to evolve at all …” said Harvard astrophysicist. 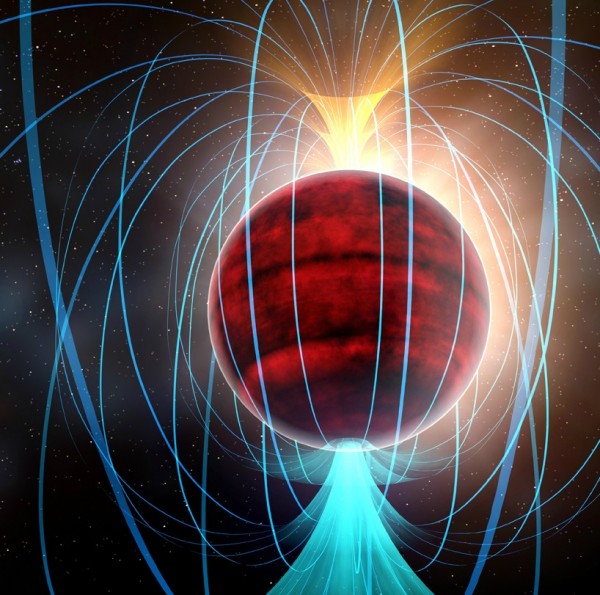 Our sun is a relatively quiet star that only occasionally releases solar flares or blasts of energetic particles that threaten satellites and power grids. You might think that smaller, cooler stars would be even more sedate. However, astronomers have now identified a tiny star with a monstrous temper. It shows evidence of much stronger flares than anything our sun produces. If similar stars prove to be just as stormy, then potentially habitable planets orbiting them are likely to be much less hospitable than previously thought.

The study was published online on November 17, 2015 and has been accepted for publication in the Astrophysical Journal.The study’s lead author is Peter Williams of the Harvard-Smithsonian Center for Astrophysics (CfA). Williams said:

If we lived around a star like this one, we wouldn’t have any satellite communications. In fact, it might be extremely difficult for life to evolve at all in such a stormy environment.

The research team targeted a well-known red dwarf star located about 35 light years from Earth in the constellation Boîtes. The object is so small and cool that it’s right on the dividing line between stars (which fuse hydrogen) and brown dwarfs (which don’t). One of the things that makes this small star remarkable is that it spins rapidly, completing a full rotation about every two hours. Compare that with our sun, which takes nearly a month to spin once on its axis.

Previous data from the Karl G. Jansky Very Large Array in Socorro, New Mexco showed that this star has a magnetic field several hundred times stronger than our sun. This puzzled astronomers because the physical processes that generate the sun’s magnetic field shouldn’t operate in such a small star.

CfA astronomer Edo Berger is a study co-author. He said:

This star is a very different beast from our sun, magnetically speaking.

The researchers examined the star with the new Atacama Large Millimeter/submillimeter Array (ALMA) and detected emission at a frequency of 95 GHz. This is the first time that flare-like emission at such high frequencies has been detected from a red dwarf star. Our sun generates similar emission from solar flares but only intermittently. What’s more, the emission from this star is 10,000 times brighter than what our own sun produces, even though it has less than one-tenth of the sun’s mass. The fact that ALMA detected this emission in a brief four-hour observation suggests that the red dwarf is continuously active.

This has important implications for the search for habitable planets outside the solar system. Red dwarfs are the most common type of star in our galaxy, which makes them promising targets for planet searches. But because a red dwarf is so cool, a planet would have to orbit very close to the star to be warm enough for liquid water to exist. That proximity would put the planet right in the bull’s-eye for radiation that could strip its atmosphere or destroy any complex molecules on its surface. Williams said:

It’s like living in Tornado Alley in the U.S. Your location puts you at greater risk of severe storms. A planet in the habitable zone of a star like this would be buffeted by storms much stronger than those generated by the sun.

Astronomers will study similar stars in the future to determine whether this one is an oddball or an example of an entire class of stormy stars.

Bottom line: A team of astronomers have identified a tiny star that shows evidence of much stronger flares than anything our sun produces.