A tiny, isolated dwarf galaxy almost 7 million light years away, with only one ten-thousandth of the mass of our Milky Way. 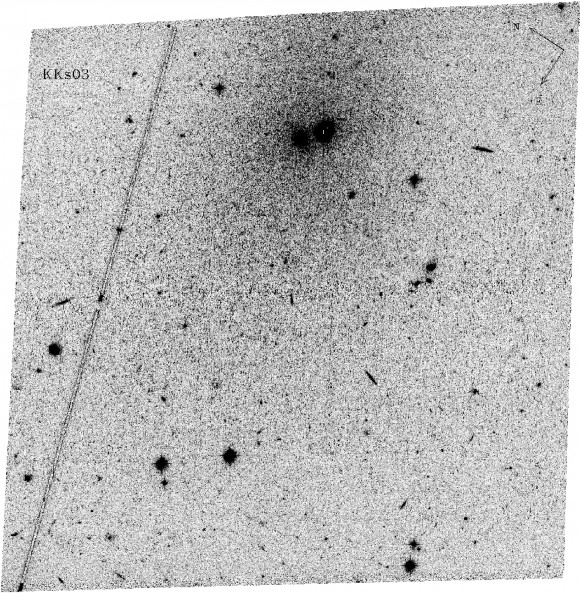 A negative image of KKs 3, made using the Advanced Camera for Surveys on the Hubble Space Telescope. The core of the galaxy is the right hand dark object at the top centre of the image, with its stars spreading out over a large section around it. (The left hand of the two dark objects is a much nearer globular star cluster.) Image credit: D. Makarov.

Our home galaxy, the Milky Way, is part of a cluster of dozens of galaxies that make up our Local Group, a collection that includes the famous Andromeda galaxy and many other far smaller objects. Now a Russian-American team have discovered another galaxy in the our Local Group, a tiny and isolated dwarf galaxy almost 7 million light years away. Their results appear in Monthly Notices of the Royal Astronomical Society.

The team found the new galaxy, named KKs3, using the Hubble Space Telescope Advanced Camera for Surveys (ACS) in August 2014. Kks3 is located in the southern sky in the direction of the constellation of Hydrus and its stars have only one ten-thousandth of the mass of the Milky Way.

Kks3 is a dwarf spheroidal or dSph galaxy, lacking features like the spiral arms found in our own galaxy. These systems also have an absence of the raw materials (gas and dust) needed for new generations of stars to form, leaving behind older and fainter relics. In almost every case, this raw material seems to have been stripped out by nearby massive galaxies like Andromeda, so the vast majority of dSph objects are found near much bigger companions.
Isolated objects must have formed in a different way, with one possibility being that they had an early burst of star formation that used up the available gas resources.

Astronomers are particularly interested in finding dSph objects to understand galaxy formation in the universe in general, as even Hubble struggles to see them beyond the Local Group. The absence of clouds of hydrogen gas in nebulae also makes them harder to pick out in surveys, so scientists instead try to find them by picking out individual stars.

For that reason, only one other isolated dwarf spheroidal, KKR 25, has been found in the Local Group, a discovery made by the same group back in 1999.
Team member Prof Dimitry Makarov, also of the Special Astrophysical Observatory, commented:

Finding objects like Kks3 is painstaking work, even with observatories like the Hubble Space Telescope. But with persistence, we’re slowly building up a map of our local neighborhood, which turns out to be less empty than we thought. It may be that are a huge number of dwarf spheroidal galaxies out there, something that would have profound consequences for our ideas about the evolution of the cosmos.

The team will continue to look for more dSph galaxies, a task that will become a little easier in the next few years, once instruments like the James Webb Space Telescope and the European Extremely Large Telescope begin service. 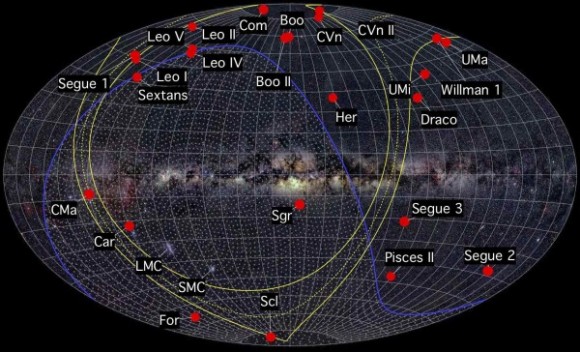 Bottom line: A team of scientist have discovered a new galaxy in the Local Group. Kks3 is a tiny, isolated dwarf galaxy almost 7 million light years away. Its stars have only one ten-thousandth of the mass of the Milky Way.