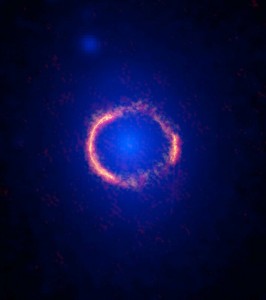 ALMA/Hubble composite image of the gravitationally lensed galaxy SDP.81. The bright orange central region of the ring (ALMA’s highest resolution observation ever) reveals the glowing dust in this distant galaxy. The surrounding lower-resolution portions of the ring trace the millimeter wavelength light emitted by carbon monoxide. The diffuse blue element at the center of the ring is from the intervening lensing galaxy, as seen with the Hubble Space Telescope. Credit: ALMA (NRAO/ESO/NAOJ); B. Saxton NRAO/AUI/NSF; NASA/ESA Hubble, T. Hunter (NRAO)

Thank you! Your submission has been received!
Oops! Something went wrong while submitting the form.
END_OF_DOCUMENT_TOKEN_TO_BE_REPLACED