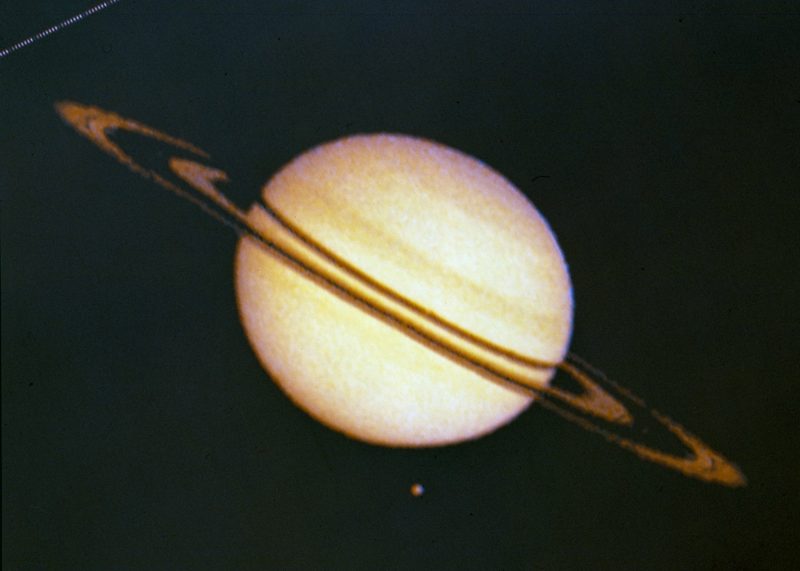 This image from Pioneer 11 – taken when the spacecraft was 1,768,422 miles (2,846,000 km) from Saturn – shows Saturn and its largest moon Titan. The irregularities in ring silhouette and shadow are due to technical anomalies in the preliminary data, later corrected. Image via NASA.

On September 1, 1979 – 40 years ago today – NASA’s Pioneer 11 came within 13,000 miles (21,000 km) of Saturn, making it the first spacecraft ever to sweep closely past that world. The spacecraft found a new ring for Saturn – now called the “F” ring – and also two new moons, almost smacking into one of them as it soared past. It was an astounding achievement at the time, when spacecraft from Earth were just beginning to venture outward. More importantly, Pioneer 11 did what pioneers always do: it paved the way for those who came after it, including the two Voyager spacecraft, which launched in 1977 and visited Saturn in 1980 and ’81. Ultimately, Pioneer 11 helped lay the groundwork for the wonderful Cassini mission to Saturn, which orbited the planet from 2004 to 2017 and which provided unprecedented and spectacular views of Saturn and its rings and moons.

There were two Pioneer spacecraft. Pioneer 10 visited Jupiter, and Pioneer 11 was used to investigate Saturn’s rings and to learn if a trajectory through the rings was safe for the upcoming Voyager spacecraft.

Scientists said that Pioneer 11 also enabled them to get a sense of Saturn’s internal composition. It’s long been said that Saturn is not very dense and that – if you could find an ocean large enough to hold it – Saturn would float on water. Pioneer 11 showed Saturn likely has a relatively small core for an outer gas giant world – only 10 times Earth’s mass – and that the planet is mostly liquid hydrogen.

Pioneer 11 is still sailing away from Earth, even though its transmission was received on September 30, 1995. As far as scientists know, the spacecraft is still moving outward – in the general direction of the center of our Milky Way galaxy – that is, generally in the direction of our constellation Sagittarius. 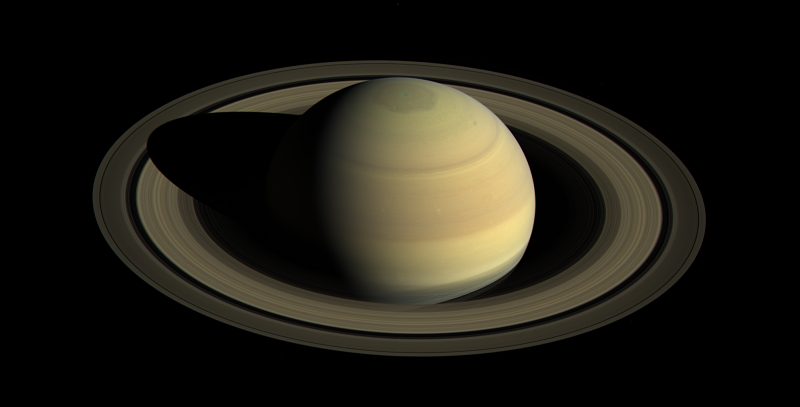 View larger. | As the years passed, and spacecraft imaging technology became more sophisticated, the images of this world vastly improved. Here’s a Cassini spacecraft image of Saturn showing the planet’s northern hemisphere in 2016, as that part of the planet neared its summer solstice in May 2017. Saturn’s year is nearly 30 Earth-years long, and during its long time there, Cassini observed winter and spring in Saturn’s northern hemisphere, and summer and fall in the southern hemisphere. Read more about this image.