Some historians believe Luna 1 – a Soviet spacecraft – was supposed to hit the moon. It didn’t but it was the first earthly craft to reach the moon, and sweep past. 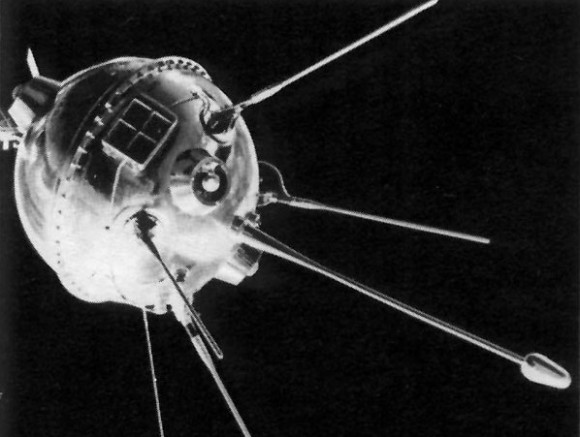 Luna 1 was a milestone for exploration of the solar system, but American historians suspect the spacecraft failed one major objective: to hit the moon. Image credit: NASA

January 2, 1959. The Luna 1 spacecraft broke free of Earth’s gravity on this date, to head towards the moon. Many believe this craft – launched by the Soviet Union – was supposed to hit the moon. If it had, it would have been a large coup for the Soviets during the early days of the Space Race with the United States. It didn’t strike the moon, but it did fly successfully past Earth’s neighbor on January 4, 1959.

It zoomed past the moon at a distance of 3,725 miles (5,995 km) after a flight of 34 hours. Eventually, Luna 1 became the first spacecraft from Earth to go into orbit around our sun.

A cool feature of Luna 1 was its release on January 3, 1959 of a large, glowing, orange trail of gas. The gas was visible over the Indian Ocean with the brightness of a 6th-magnitude; that’s the faintest star you can see with the eye alone. The gas turned out to be made of sodium vapor. It let astronomers track the spacecraft. It also served as an experiment on the behavior of gas in outer space.

On its journey moonward, the 795-pound (360-kilogram) spacecraft also picked up new data on Earth’s mysterious Van Allen radiation belts – a zone of charged particles, held in place by Earth’s magnetic field – which had been discovered only a year before.

Bottom line: On January 2, 1959, the Luna 1 spacecraft broke free of Earth’s gravity on this date, heading towards the moon.